Since my recent confession regarding a growing list of backlog items left behind mostly due to my own snotty failings, I have become a little obsessed with finishing. I am pretty sure I have admitted to being a bit of a checklist lover in past posts, and creating to-do rosters and shopping lists in order to feel that tingly sense of accomplishment once all items have been ticked off is a cringe-worthy guilty pleasure. I didn't realize it when I wrote about Skyrim and Assassin’s Creed 3 last week that the actual incarnation of something resembling a list would ignite a bit of a fervor in my mind, and now I can’t stop thinking about it. Children, OCD is a very serious illness (she says, gleefully punching in the remote settings to record Hoarders marathons). But it can also lead to “fun things,” such as completing otherwise abandoned video games and rabid searches through Xbox achievement lists to then spend several hours collecting flags. What started as an innocuous list of personal failings has become some sort of flamed-eyed drive to each game’s finish line. And even while my brain starts fretting about what it will take to accomplish that minor feat, my checklist motivated eyes have started to drift back to a virtual shelf of incomplete experiences that were based on challenge and not play and the list begins to grow…

The most difficult part of picking up an incomplete experience is gathering the enthusiasm to insert the disc into the drive. When the thought first pops into my head, “Hmm, maybe I will make some headway into Assassin’s Creed 3 tonight,” it is almost instantly driven out by doubts, “Ugh, I remember stopping because I kept getting massacred by dudes in furry hats and kilts,” distractions, “Oh! But I wanted to watch the new episode of Top Gear tonight!” or just sheer laziness, “the couch is so comfort…c’mere kitty kitty…"/drool. But last Wednesday I finally had the perfect mix of opportunity: a sick day. Sick days are the perfect excuse to get things done that you normally put off, such as mopping the kitchen floor, re-organizing the sock drawer or jumping back in to a game that has been gathering dust for awhile. After a couple hours of mindlessly petting the cat and drinking peppermint tea, my OCD brain woke up and started obsessing over The List. It’s a strange thing to explain, but it’s somewhere between a focused chant and an architectural schematic, where tiny nodes begin laying out a perfect plan for progression behind your eyes if you would only just climb on board again. But, brain, what about that Scottish dude with the ax? Him? He’s nothing to worry about, you’ll be f-i-i-i-ne, you just need a shit-ton of poison d-a-a-a-rts. Hmm…I really hate those QTE wolf attacks, brain. We’ll just move around them, no w-o-o-o-rries. Still, Connor is such a bore. But you just bought him a flashy new outfit, remember? Now he’s wearing bl-u-u-u-e. And on it goes, until suddenly I find myself sitting in bed with a controller in my hands listening to an Ubisoft logo chime. 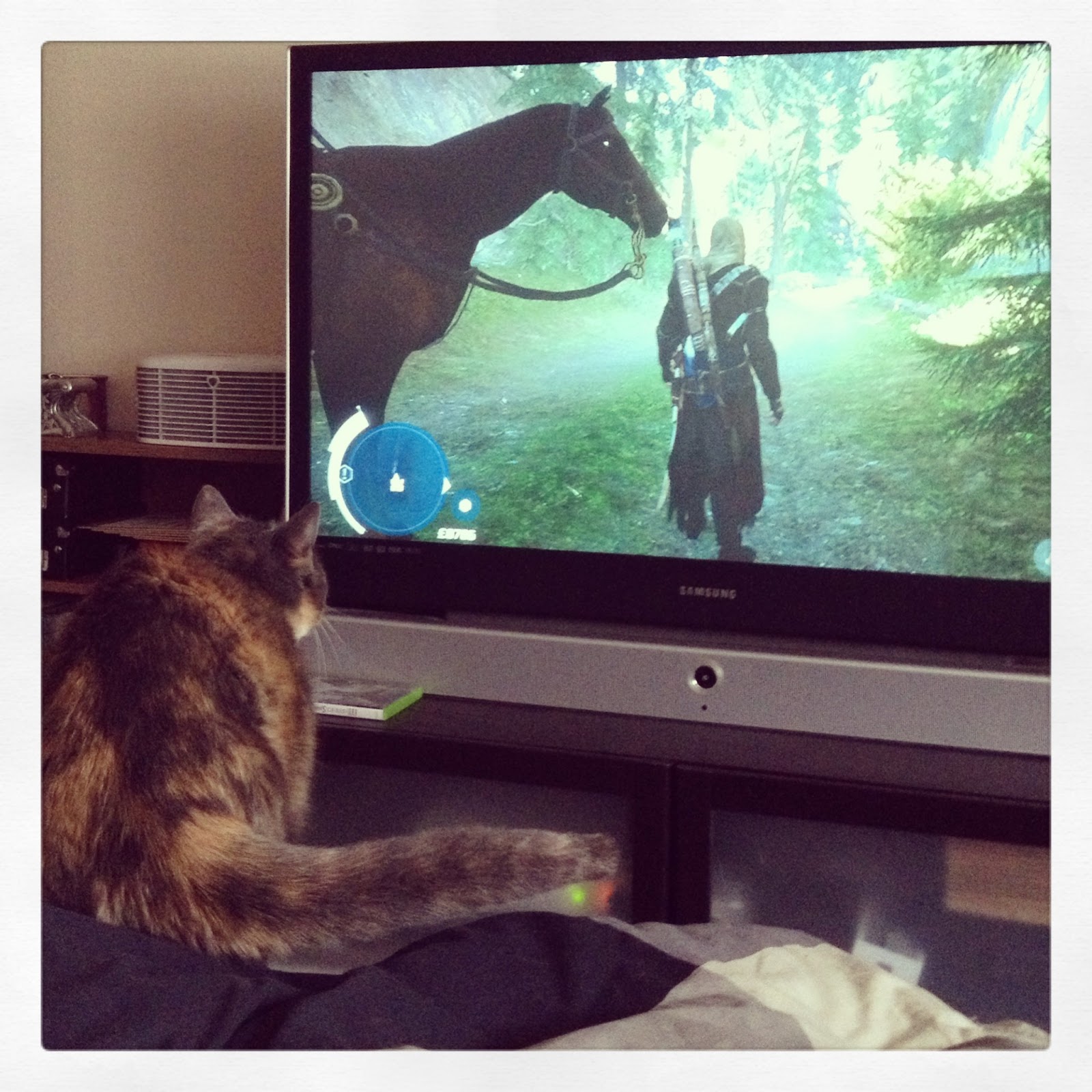 My cat really hates this horse.

The second hardest thing about jumping into the middle of a gaming experience is remembering the controls. For me, this one is easy because of the plethora of years I have been playing Assassin’s Creed games. In fact, I am pretty sure that I begin all games assuming RT is fast run and am surprised when it’s a sub-machine gun auto-aim instead. Sadly, Assassin’s Creed 3 probably has the clumsiest of navigation systems and item wheels, and even as I progress deep into Sequence 8, I am still having trouble with the map; I only ever use one piece of it, as the hunting portions mean nothing to me, and I still haven’t figured out how to send my one assassino baby on a side mission (I haven’t gotten any more, because either I have no idea what to do or my attempts to complete those missions have been met with death and subsequently avoided). Some of this is obviously player error, not game error, but I've played FOUR previous titles with ZERO trouble. The mold has been tweaked a little too much, so instead of feeling upgraded, it just feels over-complicated. But as the hours passed, with Connor and I exploring Boston, marching through Bunker Hill and climbing up ship masts to poison guards in their stupid faces, I felt a sort of gamer inner peace settle inside me. Moving through the environment from feathers to chests, side missions and main storyline finally started to align into a recognizable pattern and deep into my comfort zone. Little icons on the map start to disappear as I complete them, tic, tic, tic.

The worst thing about settling back into an experience left behind is remembering why you abandoned it in the first place. I dislike the setting very much. I miss the tall spires of Gothic churches and obelisks, the grand embellishments on every building and the brightly colored costumes of the NPCs. America is dirty, grim and brown. The trees are oddly geometrical and flat, and most of the Frontier/Homestead regions are ringed by frustratingly tall sheer cliff sides that force the player to run around for way too long before reaching an intended destination. The story missions are hard, but not in any sort of calculating way, just brutish. The characters are bland and lack the sort of teasing personalities of those in Europe. Even Altair’s story, while gritty, was beautiful in its landscape qualities. Connor is determined, but in such an overly serious way that it makes you wonder if he feels anything at all beyond a sort of sullen curiosity to become a better curmudgeon. He readily agrees to anything people ask of him for seemingly no reason at all, other than player mission marks. Because the combination of intimate story and current events is so basic and shallow, it is difficult for me to connect to either one and become involved in their motivations to liberate America from the pervasive redcoat presence. And, finally, the difficult scale seems terribly unbalanced. One mission will have you free a prisoner from a set of guards dispatched easily while the next requires you to eliminate fifteen in such a clean way it is practically impossible considering the limitations of your toolbox. And mechanically, there a bugs o’ plenty. Every time I use a smoke bomb in a group of coughing guards, I can no longer use my weapon to kill them. Little bits of Animus geometry twist through the streets of Boston but lead to nothing. Duplicated environment pieces make the areas look bland. I keep getting swallowed into cliff sides instead of climbing up them. Between the dismal characters, thin, overarching storyline and environment bugs, it’s no wonder I put it aside last November. This is not what I expect from my beloved series, but alas, it’s probably a vision of things to come.

The comfortable pattern of play is currently outweighing the drag of character and story. I stopped during a low drama moment, as I promised myself I would, and am now grudgingly looking forward to playing it again over the weekend. I am now 100% sure I will finish Assassin’s Creed 3, as I have found a sort of happy place within its narrow borders and my checklist brain keeps lighting tiny OCD fires every time I close my eyes (Skyrim! Skyrim! Skyrim!). But unless something significant happens to Connor on a personal level, and it’s something I can connect to, I imagine I shall remain disappointed. It’s possible that my love for Renaissance Europe and Ezio have clouded my vision for all future chapters in the series, but it may also be that the golden days of Assassin's Creed are over.

Arrr, only time will tell, maties.

Posted by Jessica Dobervich at 12:40 PM