To me, E3 is fairly whatever. Since most of my gaming focus lies sandwiched between Microsoft and Ubisoft, I keep a fraction of my senses focused on the headlines, mostly to see and hear any news related to Assassin’s Creed. Everything else I sort of chuck to the wayside until I can narrow in on it properly without the hype-o-drama the convention brings along with it. But, ah, to be a fan of the almighty franchise of Assassin’s Creed in 2012 is to be loved and lavished with gifts from above, in package form, with special content if you buy [here] today. This feeling is a bittersweet one for a superfan like myself, whose love for the series hovers around level infinity, but is intensely wary of huge marketing campaigns. On one hand, watching the popularity rise and rise over the years has meant more content, more games, more investment. But it also means more risk for bloat and diminished quality, as now there is an expectation that a new version will be a yearly event over a carefully constructed creative venture. It means more fans clamoring at the gate, money in hand, willing to pay for hasty add-on merchandise and tie-in content. This tornado of hype sometimes starts to swirl in such a frantic and demanding way that it becomes difficult to reach out and grasp the one thing that encapsulates a fan: the game itself.

My expectations for Assassin’s Creed 3 are still optimistic. Now that I know that Brotherhood and Revelations were built on top of a team already working on AC3, my fears about it being quick-shipped to appease the masses (and moneygrubbers) are quieter. Liberation, the new Vita title, is another story. I am afraid that this one will be the unbalancer, the hastily tossed out tie-in title to coddle those wishing for a female assassino in a starring role. Both the Chinese assassin, Shao Jun, and now our New Orleans heroine, Aveline, are sideline cop-outs in a timeline devoted to and dominated so far by men. Now, I don’t have a problem with the male assassins at the helm, quite the opposite if we factor in historical social norms versus in-game canon, and I don’t sit around clamoring for a female assassin, but if they are going to take the female plunge, Ubi should stop tucking them neatly around their big brothers and enlist a lady for the big-console spotlight in Assassin’s Creed 4. Now, obviously I have no idea if Liberation will contain stars, hearts, moons, clovers, etc, (trashing a game pre-release, woo!) but I did play Altair's Chronicles on the DS and it was terrible. I hope Aveline’s story is amazing, I just hate marketing campaigns that say “Hey guys, we are giving you something neat that we are sure you want: a female assassin! …only, she’s over here, on a handheld console that you may not even own, but give us your money anyway!” The chances I will be willing to spend a few hundred dollars to play Liberation are fairly slim. 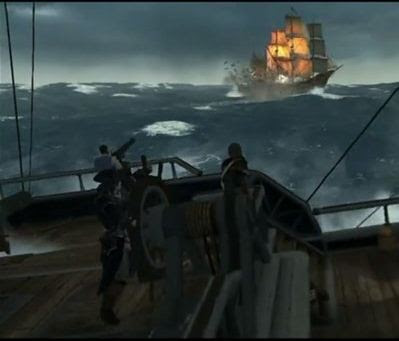