A Song of Blah and Whatever 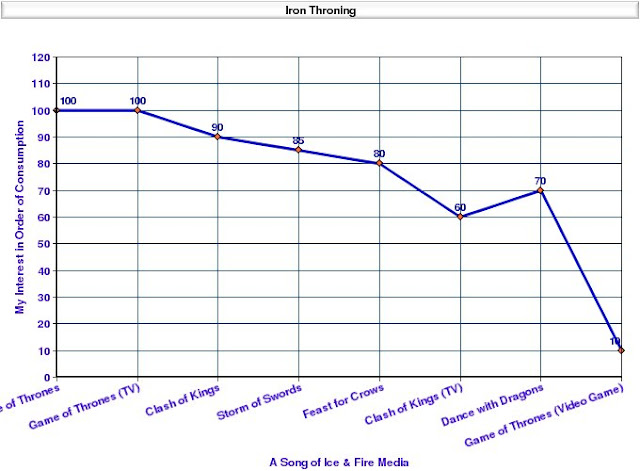 I’ve exposed myself to too many Songs of Ice and Fire in the last nine months or so. What started as a genuine interest in an engaging television series has now slumped into near apathy via a lifeless video game. When I first started watching Game of Thrones on HBO, I was excited to find a world of fantasy that seemed interesting and contained characters with real life names such as Jamie and Joffrey over things like Xananaduity or Ziftenagra, a trait in hard fantasy that normally steers me away. Set in a world that I usually describe in video games as 'Englandish' during ‘fantasy medieval-like’ times, which coincidentally, are two of my favorite topics when reading romance novels, I watched the ten or so episodes last summer and enjoyed it enough to seek out the books. The first in the series, A Game of Thrones, was delightful, all of the characters and scenarios laid out in the same timeline and format as the show, only with added descriptive text in between. But then I read the other four one after the other, leaving almost no time in between each 1000+ page tome, and the world of Westeros, although still engaging, is now starting to feel less cohesive and more chaotic, characters crashing up against one another instead of seamlessly weaving around each other in a graceful dance. Plus, I’m super mad right now. No spoilers, but damn you Martin.

And then the second season of the television show started in April and things took another turn for the worse. Instead of following the canon faithfully, now HBO seems to have taken some of the suggested themes of sexuality and violence and ramped them up into full color visuals. Instead of asserting that a character is wicked, wicked bad in words and innuendo, now we get to uncomfortably watch them base themselves in violent or explicit acts which add nothing to the show other than making the viewer a little green and squirmy. I liked the show when it flowed nicely, and now it’s jumbled. From reading all five books, I feel as though I have gained enough insight into the world of Westeros to see when the volume needs to be turned up on some scenes and toned down on others. But HBO likes the nudity and the blood. They transformed the cutest little Southern vampire book series into the raunchiest television show I can think of, True Blood. And that’s just fine for fans of the TV series – heck, I even love True Blood as a show in itself, totally unrelated to the paperbacks. But something about the current season of Game of Thrones has rubbed me the wrong way. Maybe it’s because instead of detouring from canon completely, they are trying to blend together the written story and some liberal translations in an 'entertaining for viewers' sort of way. And even I, someone who has read the second book, feel that season two is a tad confusing, and feel sympathy for those who have not absorbed the written materials, as they may have trouble following along. The ‘game of thrones’ is apparently, ‘who is that dude and where the hell is Sean Bean’? 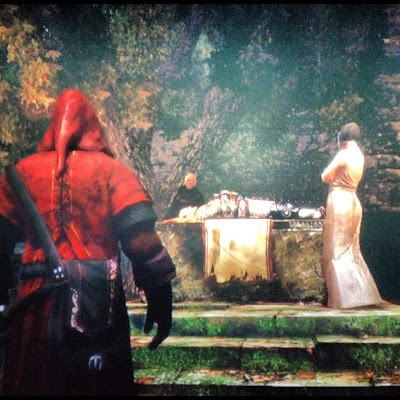 Even after finding myself in a state of over-consumption and with a waning interest in the topic, I still decided to give the new video game version a try. I’m not sure what the opposite of ‘a breath of fresh air’ is, but it certainly applies in this situation. For someone teetering on the edge of Westeros indifference, playing Game of Thrones will add that extra push into apathy, leaving you longing for a previous time when everything was tall grass and dragon eggs, pure white snow and fuzzy direwolves instead of (hinted spoilers, but not really) dead horses, unending blizzards and blackened castles. The game attempts to follow the same basic structure as the book series, with two characters inhabiting subsequent chapters and telling their own interactive stories. The writing is terribly tedious and deals with such cliché topics such as ‘BETRAYAL’ and ‘THE LONG LOST SON’. Although it is set in Westeros during the time of our beloved book series, these two all new characters lessen the experience, as there is nothing familiar to cling to as you are drowning in ennui while listening to people talk about 'THE POISON' and 'THE WILDLINGS'. I didn't make it past the second chapter, so I am unsure if Mors from the Night's Watch and Alester from Riversprings ever join forces, but I imagine their tales entangle at some point. I suppose I could wiki that, but...nah. At this point do I even need to say that the combat was terrible? It was terrible. I was not sad to seal it up and send it back to Gamefly in favor of cracking open Dragon’s Dogma, the most perfect game ever (right now).

I do believe I am going to take a break from the world of Westeros, as there are plenty of books to read and games to play in the time between now and the next book release, which could be in 2015 or never. Focusing on one media should make it easier to invest, and contains far less content to digest. I may continue watching the HBO series, but only the intro credits as they are fabulous every time. Wheee! The tiny gears and wheels spinning up into Winterfell!

Email ThisBlogThis!Share to TwitterShare to FacebookShare to Pinterest
Labels: Game of Thrones

Stale stench of sewage could be the opposite of breath of fresh air?

Also: jealous! got to wait until tomorrow to play Dragon's Dogma :-(