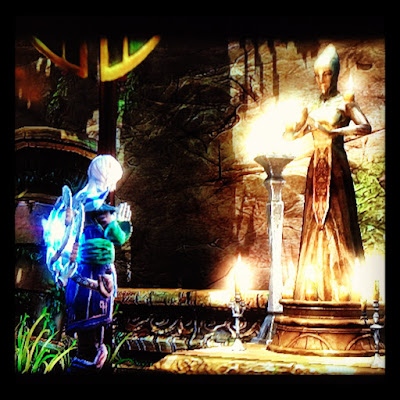 I played all of Skyrim in January, managing to do so without taking any preplanned time off work or ‘unexpected’ sick days. Late nights and weekends were spent traversing the lands, blasting fire spells at dragons and earning the respect of the various clans about the realm. I am proud to say that I finished the hell out of that game, only leaving the Dark Brotherhood quests aside (because, duh, evil), my final steps in Skyrim moments after the grande finale. And then, I was done…and a tad uncertain as to what to take on next. I’d heard loads of praise about another RPG, Kingdoms of Amalur: Reckoning, but wasn’t sure diving right back into a min/max questventure would be the smartest plan. The open world aspects of Skyrim gave life to all of the terrible sides of being an obsessive completionist, and boot stomping into another without taking the time to decompress and quietly ponder on all that occurred previously would assumedly be bad for my health and social relationships.

So I played Alan Wake’s American Nightmare. And it was…so much…I can’t… Later, I promise.

I started Reckoning shortly after Alan Wake. So…yeah. Not so much with the meditation time.

It’s extremely difficult to judge the worthiness of a game after finishing one that could be it’s fraternal twin. Side by side, their appearances are quite different, but the overall DNA structure is almost identical. I could say this about other RPG’s along the same vein, but it’s jarring to flow from one to another almost seamlessly, barely having enough time to forgot one finger pattern in place of another while performing practically all of the same tasks. Chatting up folks who need random errands run for them, picking flowers to turn into delicious potions, trying to save the realm from civil war and supernatural danger, coming to terms with being ‘a chosen savior’, fast traveling from one side of the map to another…god, I don’t even know which game I am even talking about anymore. I am starting to feel as though 2012 is going to be the year I exceed my own limit on saying “I’ll get that necklace out of that dank cave for you”. And I didn’t even know I had a limit. 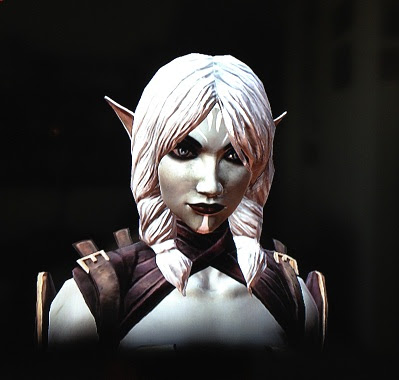 Don’t get me wrong, though, I think Reckoning is sparkly fun. The controls in combat are practically perfect, and in third person, which I prefer (playing TP in Skyrim was wrecked, IMO), and the weapon choices are neat. As opposed to other RPG’s where you must state your class and carry on, Reckoning allows you to mix it up quite a bit, and as a result, the tactics feel quite personal, such as a mage with a penchant for laying traps and stealth, or a warrior who can conjure up a demon helper in a fight. I like having a powerful staff in one hand and badass chakrams in the other. Mages carry talismans that function like wards when activated, but more similar to a shield than a spell, which is fantastic. My character is totally cartoon gorgeous, as opposed to the shadow-faced geometrical one in Skyrim. All in all, happy.

There is one way I am failing the game, however. I pick up too many quests and don’t complete them in a timely manner. Ideally, I would receive a request to do something random, perform said random task and then march back to whoever made the request and claim my reward before heading back on the road to main quest town, but…I have a problem. I take everything that crosses my path and tuck it away to do ‘later’. Two terrible results of this: one, I see the 29 side quests patiently waiting in my inventory journal and freak out, spending an entire evening performing these mundane tasks joylessly, merely to check them off of the list, or two, I randomly come across them flashing on the mini-map and pick up/kill/talk to/whatever the quest, but have no idea what just happened, the motivation behind it, who gave it to me or how it fits into the big picture of the narrative, or if it does at all. I play Reckoning like someone randomly flipping through a book and catching only phrases here and there. Since only the main and faction quests seem to have a continual drive through them, I don’t think it matters too much, but occasionally I get confused by what the hell is going on and only have myself to blame. Ah, well. Carrying on. 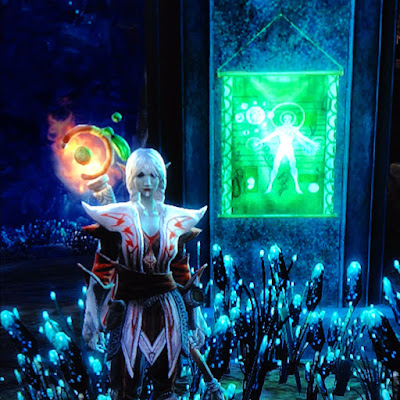 I do that with sidequests in any RPG like this-- go into town, pick up a dozen sidequests, go out, complete them, then go back, like I'm running errands in an Escape Velocity game.