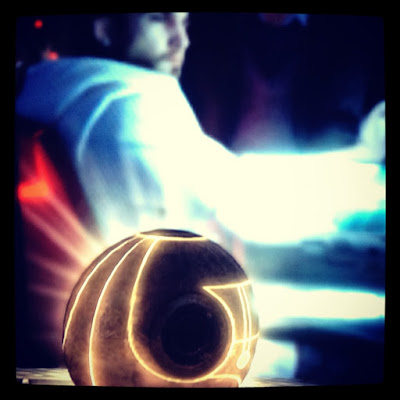 Around this time last year I compiled two lists in my head. The first one, titled ‘Fallen Soldiers’, was about the video games I started but never finished. The second was a compilation of my favorite moments in gaming from the previous year. I was happy with both and assumed that I would end 2011 using a similar theme. But you know what? In terms of great, memorable experiences, the 2011 pool to choose from has been pretty limited. In fact, if a complete stranger ran up to me on the street and hot spotted me into naming the game I would suggest as a stocking stuffer for anyone who ‘plays video games’ in some capacity, my instant response would be Skyrim. And I haven’t played Skyrim, basing my reflexive decision solely on grand forum focus, so that should tell you just how tepid my memories of the previous year are scaling right now. But this isn’t really the start of my end of the year gaming series, just some typed out thought bubbles, so let’s talk about my post-play impressions of Assassin’s Creed Revelations instead, the only game I have played in any real beginning to end capacity in the last month or so.

First off, let me say that I loved Revelations. When the credits rolled after my 30+ hour full scale, nothing-left-behind run through, my chin started quivering and my eyes welled up with fat crocodile tears. Quiet weeping ensued. But it wasn’t because Revelations had any real Oscar-worthy moments (new category – best animated performance in a game of the video variety), it was because of the sheer volume of time and emotion spent with the character’s and their continual devotion to the cause, their constant struggle to outwit the Templars, and because it finally marked the end of four years’ worth of strange Italian accents and awkward Ezio flirtatiousness. And that’s very sad. As much as I am eager to dive into a new time period with a new assassino, a poignant melancholy settled over me when saying goodbye to both Altair and Ezio. I mean, crap, I first met Ezio in AC2 shortly after he emerged from the birth canal, so a fond salute to his fifty year old distinguished self seems natural and completely necessary. Truly, the best moments in Revelations came via cut scenes and flashbacks, the character drama the highlight of the final chapter. Meeting Sophia and Yusaf was fantastic, and their roles in Ezio’s Constantinople chapter vital and engaging.

But Revelations was no Brotherhood. With the exception of some hiccups here and there (I hate you, race missions, die in a fire), Brotherhood took on new mechanics with ease. I thought the restoration of Rome was a tad silly in the beginning, but grew to like it over time. Leonardo’s weapon missions were a little disjointed, but not enough to distract from the beauty and overall gracefulness of the ancient city spires and outer buildings, and having clandestine meetings with the man himself via special benches was such a wink and smile that I couldn’t help but love it. Sometimes a cathartic ride through the grassy fields alongside the city walls on a magnificent horse (totally hijacked from a guard) between missions was all that was needed to prepare for the next assignment. In playing the original game again, I can see the advantages of keeping it simple and allowing the player to merely explore the territories without any pervasive urgent qualities. Toss in the well-earned Cristina missions in and, to me, Brotherhood was spot-on perfect. Any additions from AC2 were either discarded or nurtured, and no one shoved any more or less than you wanted into your repertoire.

And…Revelations took the peace and quiet away. Along with my beautiful Italian countryside, I lost my horse. In its stead, I gained a hook blade and ziplines. Instead of freedom to restore and evolve Constantinople to my liking, in my own time and via my own design, the Templar presence was now ubiquitous, and any actions that could be construed as subversive are tracked and noted via a gauge that needs to be constantly monitored to ensure that a den takeover does not ensue. If it does, a mini tower defense game follows, which is so rare and clunky that there was never a chance to perfect it. I spent a lot of wasted time avoiding them by circling around blocks to pay off heralds in order to keep the meter on simmer, not boil. Revelations injected urgency into a game that responds best to stillness and stealth. It shoved bombs into my pockets and encouraged assassin/guard shoving matches. I couldn't even finish Desmond's journey, the sudden first-person perspective so abrasive and ill-suited to the normal flow that I gave up after the second chapter. And where these moments didn't fully deter my normal grinning from ear to ear Assassin’s Creed experience, because of course there was rooftops and running, it certainly made me long to repeat all of the Constantinople missions within the sanctity of Rome, regardless of how grand and glorious the sun appears when setting over the spires of Hagia Sophia.

If the franchise was scheduled to continue along the same vein, I believe without a reassortment of mechanics it would start to crumble underneath the sheer weight of its toolbox. My hopes for Assassin’s Creed 3 is not necessary a complete reboot, but possible a reimagining of how to breathe spirit and soul back into the game. The majesty of this series is built upon the grounds of silence, not explosions and noise. If they stop peering so heavily into the weapon wheels and instead continue to focus on the tightly coiled tenseness of each narrative situation, I think they will find all the tools they need to keep the series colorful through characterization and not silly video game mechanics. I’ve continually called this series a book, with many different chapters and volumes, and I hope the next in the series repaints a picture using a color palette and an ink quill pen, not a strategic war board.

Even through the smears of lamb’s blood and poisoned gas, Revelations still had meaningful glances and tulips. And sometimes the details make all the difference. 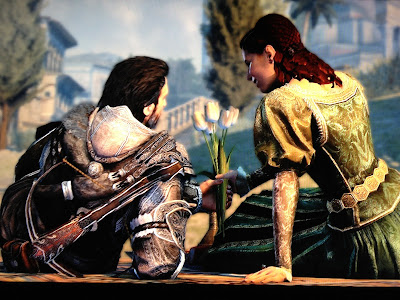