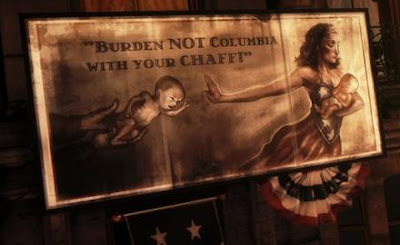 Last weekend we traveled to Idaho to visit family for the holidays. Unfortunately, this short vacation also happened to coincide with the final hours of my trip through Revelations, forcing me on a brief hiatus before I could put the cheevo checklist to bed and call it complete. So although it didn’t plague me during every waking moment, I did spend some introspective moments plotting the best way to maximize my Assassino babies to achieve Master status and imagining the most strategic point in which to parachute from the top of a tower onto a zipline. Sadly, most of these thoughts came in the middle of the night, as foreign beds always equal epic insomnia. So instead of carefully planning the best approach to the last bits of Revelations upon our return to Seattle, most of the visualizations came via wonky half-sleep madness, with Ezio starring as himself in a madcap trip down the rabbit hole. Oh, and parachuting onto ziplines. For some reason, I could not stop ruminating on that one... But it was during one rather sleepless night, in anticipation of an ungodly early alarm setting, that my mind started pondering my future 2011 highlight reel blog (Ezio parachuting onto a zipline, obvious contender), then drifted further into my anticipatory 2012 list, where I found myself suddenly and inexplicably angry about Bioshock Infinite.

I first wrote about Infinite in August of 2010, where I yelled and screamed and threw my hands in the air with joy when the news broke. Then I wrote about it again in September of 2010, where I made a promise to ignore all of the marketing hype around the game until they named a release date, which at the time was a vague ‘2012’. Let me quote myself from over a year ago:

“The game is not slated for release until sometime in 2012, for goodness sake. If I peer diligently into each and every new press snippet and gameplay teaser, I feel as though the mystery of our fair Columbia will be completely lost. …with age and experience I have learned how to tune out aggressive advertising campaigns, as I tend to lose interest if I am bombarded by a product long before I can actually get my hands on it. I want to be surprised, I want to be shocked. So I apologize, Irrational Games, but I am going to resist the press leaks and try to avoid seeing too much of your newest gem before the game is in my Xbox and I am exploring it on my own. But I can promise you that once you name an actual release date, I will put my money where your mouth is.”

Here we are, at the tail end of 2011, where I feel as though I should be saying, Hooray! I can rest easy knowing the game is in its final stages of development with the team itching to emerge with a glorious product. And I could be preparing myself for a new chapter in a beloved franchise, devouring the small tidbits of information that are slowly released over time, ramping up to its scheduled release date. But when it comes to Infinite the trail of information stretches backwards from here to August 2010, with booths at gaming conventions, panels, articles, interviews with the voice actors, Q&A’s with the developers, magazine covers, contests, supposed ‘changes’ they are making because of the Occupy Movement, features on Xbox Live, more trailers, etc, etc. Ugh. I adamantly dislike marketing campaigns, even to the point where I ignore 99% of the junk that Ubisoft tosses out as marketable tie-ins to Assassin's Creed (one could get buried underneath that mountain of nonsense). I feel as though there is so much data out there about Infinite that when it’s released none of it will be a surprise. Well, except to me. Due to sheer strength of will and a sassy (re: ornery) attitude, I have managed to boycott, ignore, cold shoulder, shield my eyes, etc, etc, all of the above list of marketing goo that’s been spreading all over the internet and gaming media world for almost a year and a half now, skimming headlines for intricate mentions to get basic facts without any substance.

Because they still haven’t announced a release date. And at 4am on a cold Sunday morning after a scant three hours of restless sleep, this fact suddenly made me feel a tad resentful. Now, I know that Irrational Games doesn’t owe me diddly squat when it comes to delivering anything, but I’ve turned from an avid and gleeful supporter, still feeding off the last vestiges of Rapture love and Little Sister adoration in 2010, to an irritated watch gazer, sighing in frustration as I skip yet another article in my RSS or Twitter feed about Columbia and her supposedly awe-inspiring and photo-worthy main cast. And as a fan, this means something. Where originally my self-inflicted ban was based on the idea that I didn't want to be exposed to too much material pre-release in order to be surprised, now I skip it because I feel weary of its existence without the promise of a physical actualization in disc format.

Please, Irrational. I don’t care if you slyly avert your gaze and mumble ‘...probably in the summer of 2014...’ while still pouring out conceptual art and pasting pretty cosplayers all over your website. As a future investor in your game, I beg you to just slate a damn date so I can pin a glitter covered star on the calendar and start counting down the days. I don’t want to have any more hazy and hallucinogenic nights feeling all petulant and pouty-face at you.