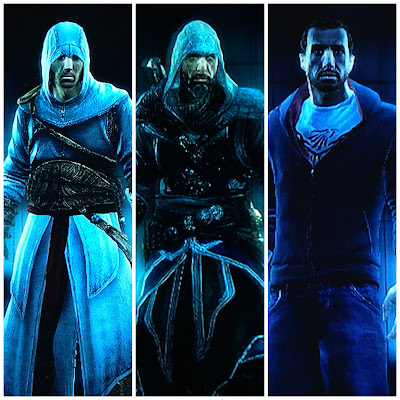 One of my favorite aspects about the release of Revelations is the increase in speculative chatter about Assassin’s Creed III, which instead of being a vague maybe, is now an absolute certainty. I’ve thrown my voice in here and there, lauding the people vs. government aspects of The French Revolution, noting the perfection of its old world architecture and style as the picture perfect setting for the next chapter, but who knows? Maybe it really will be Desmond’s chapter – enough has happened to the poor guy to warrant a happy ending somewhere, right? I’m saying this a little prematurely as I have yet to complete Revelations, but I really feel bad for poor Desmond, bartender and Animus lurker, his only crime to have some deeply enriched DNA fragments that everyone wants to pick and prod at for their own gain. Then again, to finish Desmond’s story would practically kill the franchise, since he is the element that ties all four games together, even while Ezio’s wink and smile charms the pants off practically everyone who comes in contact with him.

Revelations is amazing in the same way Brotherhood was innovative, although with a new paint job to make everyone look a tad better than in the previous games. And boy, the new graphics are a wonder to behold if, like me, you just stepped away from the stark grays and pale blues of the original game. Constantinople is azure and red, a jewel in a harbor full of giant ships and reflective water. It’s residents wear robes of green and gold, with ornately masked guards and the highest steeples and towers propping up the starry sky. It. Is. Gorgeous.

But where Brotherhood transitioned from Assassin's Creed II with an arsenal of new ideas and mission selections that cluttered the map while adding unending choices (a trait that continues with Revelations), all of the shiny new ideas in Revelations feel a little forced. The bomb crafting is meh. A new little tactical game for recovering Assassin Dens from the Templars feels tedious and weird. Desmond’s adventures in the Animus are really strange and very reminiscent of Portal puzzling. Every time I find a new element in Revelations that wasn’t in Brotherhood I am left either frustrated or shrugging my shoulders, feeling more distracted than engaged. Well, except for the hook blade. That wicked weapon-slash-tool makes climbing Hagia Sophia from the ground up a total breeze. Never leave home without your hook blade.

All those things aside, because Revelations is so similar to Brotherhood, I love it to itty bitty pieces. I ignore most of the crap that bores me or makes me shake my head and focus on soaking up the ambiance and Ezio and Altair and Desmond and--holy crap, is he zip lining through an underground waterfall? And Oh My Altair (OMA). His memories are accessed fairly infrequently, but when they are I am on the edge of my seat, riveted by the idea of more. No offense to suave Ezio, because I heart him like a brother, but the enigmatic set of Altair’s gaze is just perfect. All broody and take chargey. I’m savoring them to the point of avoiding the flashing booklamation icon on the screen in favor of my intricate methodologies of raising a new fleet of assassino babies and collecting treasure chests. I am a professional at dragging out my Assassin’s Creed experiences for as long as possible. It doesn’t really matter what I am doing, I just love being there, in that world, running through the streets and leaping off ledges, collecting twitching origami Animus pieces, succumbing to Romani charm and rousing the guards in playful chases around the city. Whether it’s Jerusalem or Florence, Venice or Rome, Constantinople or…Paris? I’ll be there.