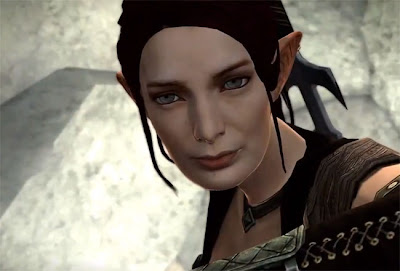 Usually when there is less than a week until the release of a Dragon Age related DLC, I start making little hearts on my calendar and refrain from spending my MS points on trashy rom-coms and fun avatar accessories in preparation for the inevitable downloadin’. But I don’t know, guys. The Mark of the Assassin kind of weirds me out. I can’t help but think, huh, Felicia Day-that is her right there. That is not a character in a game series with elf ears and a sassy name. That is the actress Felicia Day. I hear her voice, I see her slightly distorted animated features and it totally creeps me out. And please let me emphasize-I have only the utmost respect for Ms. Day herself. I have enjoyed all of the features and web videos she has written, and even admired her singing voice in Dr. Horrible. But the idea of placing a really real person that I have an association with as a flesh and blood entity into my beloved fantasy game creates a sort of disjointed perspective in my mind. Frankly, I think it’s so bizarre that for the first time ever I am considering skipping the DLC completely.

This isn’t the first time I have had this problem. I remember when animated feature films started using bonafide stars as voice actors. I’m more used to it now, but at the time I had a hard time separating the character from the picture in my head associated with the voice. The 1998 animated version of the Prince of Egypt had both Sandra Bullock and Jeff Goldblum voicing particular characters (and in Goldblum’s case, his distinct gestures and mannerisms were infused into the animation as well), and although I really loved the movie (still do!) I could never fully invest during particular scenes because I kept seeing the actor's faces superimposed onto their 2-D counterparts. Like I said, this is so common now that big actors get top billing for merely their voice work, but it’s still sometimes difficult for me to become 100% immersed in a fantasy world when I keep seeing the wrong face attached to an audio association. But at least in these cases the physical representation is different-in Dragon Age, I now have to believe in the actress as an actress inside an interactive experience. And it’s beyond strange.

I can’t help but think that if I felt the opposite of how I do, and didn’t admire Felicia Day as an actress, that this would potentially create a sense of apathy and disconnect me from the experience in a way that has nothing to do with the normal bad mechanics, poorly written storyline or any of the other usual reasons why people would shy away from a particular game. It would be simply because I didn’t care for the playable character, and wanted to avoid having an intimate experience that involves her, even if it meant turning my back on a chapter in one of my favorite series. I imagine if they modeled my favorite of the DA2 characters, Fenris, on one of the young actors gracing the covers of the magazines, I would have had a completely different experience. If so, I would never have had my DA2: Part Two playthrough, “What Would Fenris Do?”, where we argued passionately and kissed awkwardly, our love blooming and manifesting over time (obviously, I am still a teenager). I would have said meh a lot while shaking my head, knowing that Mr. Disney-They-All-Look-the-Same-Youth was just nailed by the tabloids for having a late night kiss with Ms. Starlot-Who-Gives-a-Crap and wouldn’t have invested as heavily. These characters work because I can semi-mold them into my own vision of who they should be, especially in a BioWare world, where the player often leads the story, even if the multitude of choices are predetermined.

Oddly enough, I had the opposite situation happen recently, where I encountered an actor as a video game persona before I experienced him as a film star. After playing LA Noire with all of its hyper-realistic characters, many of them sketched, modeled and voiced by B- or C-List actors that you recognize vaguely but can’t quite pinpoint from what or where, I got pretty close to a man named Cole Phelps. We drove together, we interrogated perps as a team; I saw him through his proudest moments and emotional dark times. Heck, I even helped him climb into a fountain to retrieve Elizabeth Smart’s social security card and held him while he cried (added for dramatic emphasis-that never actually happened). Between Cole and I, we had some serious times, man. And then I started watching Mad Men a few months later. Seeing the actor, Aaron Staton, chilling on the couch in an outfit resembling the ones I repeatedly chose for him in LA Noire, my brain did a back flip. To this day, I have seen an entire season of Mad Men and I could not tell you the name of Aaron’s character in the show. To me, he is and will always be Cole Phelps, the cocky police officer who wormed his way up the proverbial ladder in Los Angeles circa 1947. LA Noire is now my primary source for this man, no matter what he does in the future. We spent 40+ hours together solving murders and nailing investigation tracks. This experience will always supersede any one hour show where he is a supporting character or even a two hour film where he is a lead. To me, Aaron Stanton is Cole Phelps.

So because my knowledge of Felicia Day is primarily as herself or someone resembling herself in shows like The Guild, or even through the many book reviews she writes on goodreads.com, I know that I am going to have an extremely difficult time suspending disbelief if I jump in to the Mark of the Assassin. Maybe if she was merely the voice actor and not completely recreated as her own personal elf vision, I could at least try to focus on the movements and choices of who she is depicting, but seeing and hearing her within the game is unnerving. I’m sure in the end I will play it, as I am total goo when it comes to Dragon Age, but I am seriously doubting that I will be able to feel the normal immersive qualities when such a recognizable person is continually pulling me back into reality.

Totally got through this philosophizing without using the phrase 'uncanny valley' once. Pretty proud right now.

I find that Felica Day weirds me out here, but I think it has less to do with the fact that it's Felica forking Day and more with the way she's implemented. There's a seriously Uncanny Valley thing going on with her presentation in this DLC, which makes me kind of shy away from it.

That said, this isn't a problem I had with Mass Effect 2 and its presentation of the character Miranda, who was voiced and face-modeled after Yvonne Strahovski. I think it comes down to the aesthetic, since I've been into enough media that includes voice actors that I'm not put off by visual similarities between the actors and their characters anymore (whether it was intended or not).

Yeah, I get creeped out when you hear voices in games. In all the Treyarch Call of Duty games the usually have cameos by actors. Like Keither Sutherland in World at War, which kept making me think of 24. Then you also have Ice Cube who voice acts in Black Ops, and it pulls me out of the game.

I like when you don't know it is an actual actor and it freaks you out. Mark Hamil's role as the Joker in Batman Arkham City made me appreciate him more as an actor.

P.S. I probably butchered the names of the actors but I am half awake writing this comment at 3am.