Lord of the Thongs 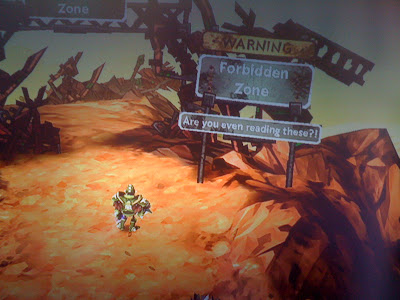 Approximately eleven months ago I typed these words on this blog: I hope they make another Deathspank...but not for at least a year. Now, I am not saying I am psychic or in cahoots with Hothead or anything, but I am pretty sure the release of The Baconing coinciding with my previous statement means I am a genius. Or it’s a total coincidence. Either way, hooray! Another chapter of Deathspank is upon us! I love this series like I love bromance movies and television shows about babies. When news headlines are full of nothing but grim forecasts of the future or whiny politicians pretending they know anything about how real people live (/takes a deep breath), it’s lovely to delve into something specifically designed to make you giggle. Deathspank is action-adventure role-playing at it’s very lightest, with full-color, cartoonish backdrops, easy weapon choices and auto-loading armor, allowing the player to settle in and merely enjoy the scenery with semi-glassy eyes if they so choose. I could criticize the game for these elements alone (when all you have to do is travel from one area to another and occasionally mash buttons, how mechanically interesting could it be?), but I am a diehard apologist for the overall interactive experience, where the story and setting matter more than the mechanic. In lieu of elaborating on this idea, I will just say that this topic has been mulled over by peeps who have done extensive psychological and analytical research on the matter, whereas I only care about how I personally interact with the games I play. And I am here strictly to talk about multi-colored thongs, bacon fire and orphans. And how they all connect to a building called the Pleasuretorium.

The Baconing starts with Deathspank learning that he has erred dramatically by tugging on all five thongs of power at once. This makes total sense, as wearing five pairs of underoos at once would be a tad snug, but apparently doing so has also made them quite unstable. Now Deathspank must travel to several different lands to seek out the locations of legendary bacon fire, which is the only thing that will destroy such objects of power, as well as searching out his arch nemesis and shadow character, Antispank. Along the way he gets help from orphans and meets up with many of the characters from the previous chapters. Each area is themed, with a love-bot infested Pleasuretorium in a post-Cold War infused theme park and a leprechaun inhabited Casino in Rainbow’s End. My favorite was Valhalla Heights, a retirement community for Norse gods…and Elvis? Anyway, you get to play mini-golf with Thor and dive into the Underworld to save Hades and mail some hellish property deeds. One of my favorite missions involves doing twelve tasks for old geezer Zeus, who is hunched over a walker, in order to become a god. After two deeds (mainly landscaping in nature), he asks Deathspank what number he is on and DS replies “TWELVE. This is definitely the last one!” 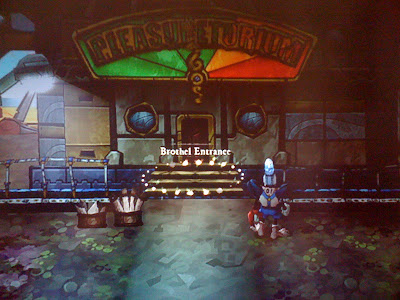 As a whole, the game hasn’t changed much from the previous chapters. As opposed to being boring or repetitive, though, it was comforting not being forced to learn a new inventory management system or weapon selection process and could instead focus primarily on the elements I like best–the story and the setting. Because even at its most random and ridiculous, I greatly enjoy the flow of this series. I am fond of the contained, hilariously themed areas, and the step-by-step mission layer in each that builds to a level boss crescendo. This sort of rinse and repeat progression keeps the game from sinking into anything resembling serious, as the kinds of missions undertaken are usually a touch juvenile in nature. For example, one mini-quest has our hero, the !Ultimate Vanquisher of Evil!, spiking a lovely fountain with poo to further provoke a feud between rival princesses in the Forbidden City. I can’t help but lose myself in the ambiance of the game, even if it isn’t terribly heart engaging or thought provoking. By not having to think too hard about my next step, I can enjoy the game purely for the colorful and well-designed environments our hero traverses during his main quest while taking on mini-quests akin to eating ice cream bites or buttered popcorn-merely a diversion from the central storyline, but just as satisfying in their snack-like qualities. 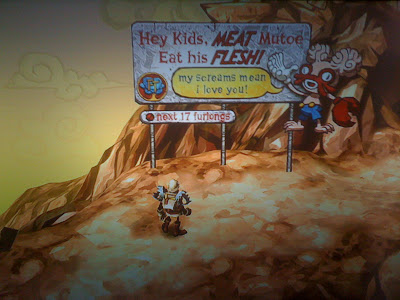 I recently played through Torchlight and am currently co-oping through Crimson Alliance with the husband. As bored as I was in Torchlight, I am finding that the basic story parameters of Crimson Alliance are far more engaging, especially since it’s a buddy game at heart, encouraging players to find real world partners in order to maximize the experience. But although at their core these games have almost everything in common with Deathspank-the action adventure RPG, the level up of characters or weaponry, an intricate, stat-filled inventory system, epic smashing of barrels and jars to collect coins and trinkets-I have much less to say about either of these more ‘serious’ titles, even though they are generally thought to be ‘better’ games. I suppose those who support more serious endeavors to invest their precious time in would find Deathspank quite immature and ultimately too ridiculous to even bother with a demo, but I think the creativity and ingenuity of Hothead, with what appears to be a now ongoing franchise, should be held just as high as the traditional dungeon dive arcade titles. Deathspank is silly fun, perfect for an arcade title, with beautiful graphics and a rather intricate storyline-even if that narrative has zero serious qualities. I think it’s probably time I download Monkey Island…considering I have yet to play it… /cringe

Best part about writing this review? Adding the word “Deathspank” to my MS Outlook internal dictionary.

You Know I own the first DeathSpank and have not gotten into the second one yet. I am a big fan of the series, and plan to play through all of them sooner or later. Its a good action RPG with some really great humor, but my question is should I buy it now or just wait till it goes on steam/xbox sale?

I got to interview Nels Anderson who worked on the first DeathSpank and if you have not read his blog Above 49 you will love it!.Hope to read more from you soon!