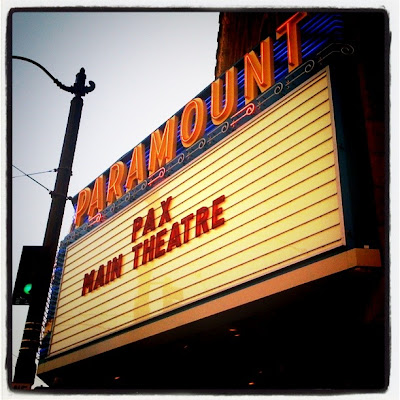 We are attempting to take on this PAX a bit more casually than previous ones. Instead of adhering to any panel schedules or must-see events (with the exception of the ACR demo in the Main Theater, located in the absolutely gorgeous historic Paramount Theatre a couple of blocks away) we are trying to take it easy and see the sights without engaging too much with those games with the extra long lines wrapping around enclosed booths. (Side note: This has to be my least favorite new thing -- the exhibits inside little rooms, forcing those who want to see the game to wait in line for hours to even get a peek. Sadly, Gearbox is showcasing Borderlands 2 in one of these spaces, and I am not about to stand around for two hours to try a game that is a sure thing. I know I will buy it at launch, and I am fairly certain it will be great.) So today the plan is to play some tabletop with friends, try an encounter or two in DnD and generally relax...if fighting off 65,000 other people crushed inside a building can be considered relaxation, I suppose. Either way...on to day two. But first...Zzzzz...

Posted by Jessica Dobervich at 11:49 PM No comments:

Email ThisBlogThis!Share to TwitterShare to FacebookShare to Pinterest
Labels: PAX

New ACR Trailer to Fill My Heart with Joy

Hey little blog, long time no...type. Just wanted you to know that I love you and miss you. I was under some minor stress in the last couple of weeks because I recently married a wonderful man; and although we had the most intimate wedding ever without being called an official elopement, the planning and proceeding of the event were still on the forefront of my mind, distracting me from the playage of video games and the writage of it post-playage.

Rather than beg for forgiveness and promise that something great is on the horizon, I thought I would give you a gift. Here is the newest Assassin's Creed Revelations trailer, straight off the Gamescon floor. Personally, I think it is the sweetest thing-it makes me near on twitter with glee just watching the frames switch between Ezio and Altair. November can't come soon enough. I hope you feel the same.

I am not sure why, but this little blip of Desmond near the end of the trailer gives me goosebumps: 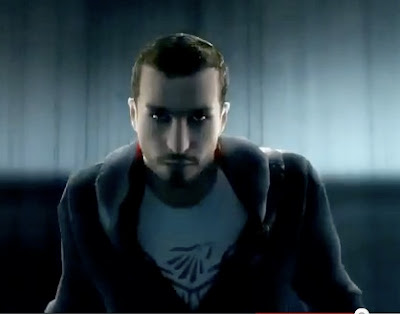 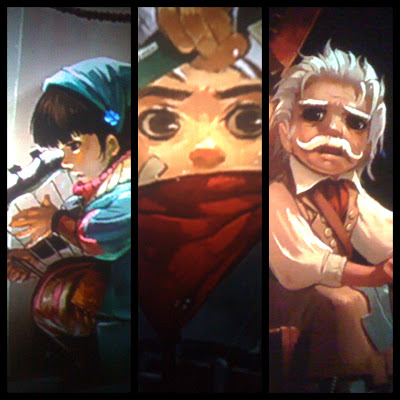 I can pinpoint the exact moment in which I fell utterly, shamelessly and completely in love with Bastion. Shortly after a soothing voice introduced the tale of a wide-eyed, white-haired boy simply called "The Kid" and his role in reshaping the world following the Calamity, a devastation that destroyed the world as everyone once knew it, we met a character named Zia, initially called The Singer. Zia was a surviving member of the Ura clan, a race that lived alongside the Kid and Rucks before the Calamity. And her voice was simultaneously the hued honey of a campfire and an Old West frontier ballad. Her song was so beautiful I literally felt my eyes well up with tears. It's rare when video game music can reach right in and grip my soul in such a way, especially one that I just purchased virtually for merely fifteen dollars, but I was completely lost in its eyes from that point forward, and all of the elements mixed in around it only added to that blooming fire of adoration.

Bastion is a story about a Kid as told by a narrator named Rucks. Strangely, even though I controlled the movements of the Kid, I always felt closer to Rucks. And I believe this was deliberate -- Rucks and Zia had names, the Kid was always just that. A nameless hero, destined to bring the story to a climax and resolution, his tale carrying on as a living legend through the powerful medium of storytelling, more legendary in his deeds than by his face. The Kid is helping put together the Bastion, a central island refuge amongst the tatters of the Calamity. By venturing out to the now monster-infested pieces of the old world to collect the core materials to infuse the Bastion with its full powers and potentials, he is also uncovering the secrets and startling revelations concerning the origins of the Calamity. As the Bastion flourishes under his touch, a wide variety of options is revealed to the player in order add more depth and customization to the experience. 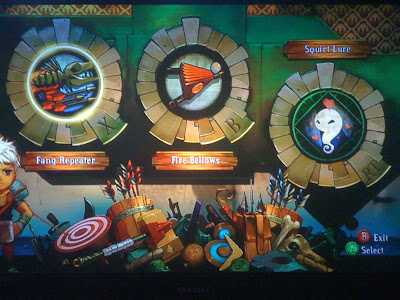 As twitter-pated as I already was about the music in the game (and seriously, it's brilliant, changing pace and tempo in such a fluid and meaningful way), I was equally impressed with how the player could change the game. It wouldn't change the narrative or the landscape in any way, but instead changed the Kid himself and how he interacted with the environment and the creatures that inhabited the surviving chunks of the old world. The Forge allowed the Kid to manage his arsenal, using a variety of different weapon choices. Unlike other games, the weaponry didn't gain in power or achievement as the game progressed-instead all weapons started at a lower level and stayed customizable to the player. If you loved using a wide-spray shotgun and a giant hammer, you could. If you wanted to use a bow and a machete, you could. My personal favorite was the Fang Repeater and the Fire Bellows, because it's just mega-cool to use a fire breathing bellow as a windbag killer. Using the Distillery allowed the Kid to keep tonics with names such as Stabsinthe or Dreadrum in his pack, one for each level gained, that would increase his powers in a variety of ways as he progressed through his quest.

For those who love a challenge, the gods were waiting to hear your prayers in the Shrine. By holding vigil to the right combination of gods, the way (enemies) became more difficult to overcome, but the rewards were greater for those who chose this path. A visit to Who Knows Where sounded ominous, but...well, I'll just let you experience that one for yourself. All of these choices gave the actual playability of the game more than you would expect for such a short game. 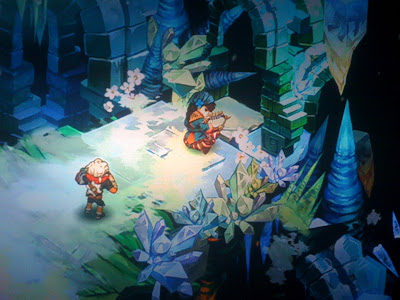 Also unexpected is how easily a secondhand story could affect your real emotions. As told by a narrator and depicted through visually stunning game play, the fallout of the Calamity managed to raise some serious questions for the player as well. I adore games that force the person at the helm to confront his own sense of right and wrong in order to progress. Even simple choices contain much deeper consequences. Other games have done this well, such as Heavy Rain, but in a more thoughtful way. Instead of relying on emotions, you were forced to consider a bigger picture in which clues could be gathered to craft a delicate chain of reactive behaviors towards a much larger goal. In Bastion the emotional side rules all, and the choices are purely that, tugging on your heart and not your head. All choices made are based on love alone-love of family, love of new friends, and for the poignant and unconditional love of a breathtaking world filled with high-spirited characters and remnants of a past that should never be forgotten. And above all, Bastion is a love letter to a storyteller, the masterful wordsmith who crafts a brilliant tale against an otherwise dismal backdrop of Calamity and monstrosities, whispering the tale of the Kid to a rapt audience in the glow of the brightly lit pillar called the Bastion.

Email ThisBlogThis!Share to TwitterShare to FacebookShare to Pinterest
Labels: Bastion

Treasures in the Mail 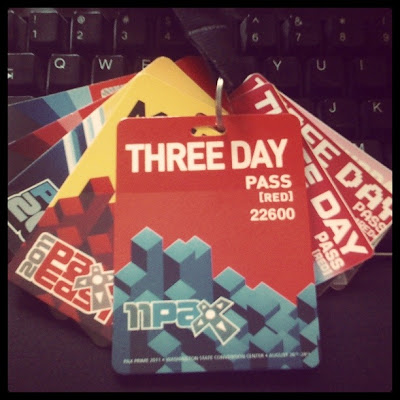 I've got so much going on in my really real life right now that the idea of PAX still seemed so far away. But receiving the badge is a gentle reminder of its imminence and the promise of well known delights on the horizon.

After last March, Matt and I decided that 2011 was probably the last year we would attend PAX East. We flew over for the debut year and then again for the sequel in the echoing halls of the enormous Boston Convention Center and feel like it's in good hands with the droves of east coast attendees now loving their PAX just as much as we love ours. With only so many vacation days a year, it's time we set out an explored other areas of the country and the great green planet Earth in ways that just might not be video game related. Best wishes to you, PAX East. To us, Prime will always be home.

And now, with badge in hand, I can't wait to go home.

Email ThisBlogThis!Share to TwitterShare to FacebookShare to Pinterest
Labels: PAX

I've decided to devote 24 straight hours in October to video games in a gallant attempt to raise some monies for the Seattle Children's Hospital. Extra Life organizes this event every year, and I am excited to be a participant instead of a spectator. I still haven't decided what games I will play...but since it's two weeks prior to Halloween, a Costume Quest run through sounds quite appropriate.

If you would like to assist in my cause to help Children's Miracle Network, please click here to donate - the going rate is $1/hr or $24 total. As a 32 year old woman who loves her sleep, this is no small task, but if you donate, I will be sure to give it my all.

If you would like to be a participant, please visit www.extra-life.org.