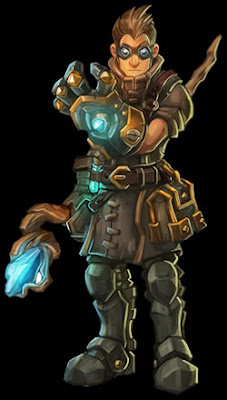 There I was, hacking away at another Insidious Ruin in Alice, almost near the end point of Chapter Three, when in a sudden moment of exhaustive clarity, I lost all motivation to even hold the Left Trigger and turned it off. I just couldn’t do it anymore. Spicy Horses’s Wonderland resurrection is just too damn long and ridiculous monotonous. ‘But it’s so pretty!’ my inner self whined. ‘Don’t you want to see the realm of the Queen of Hearts?’ YES. But I needed a freaking break from the incessant double jumping, a mechanic that I used to find appealing due to the curling butterfly trail our heroine leaves behind after every prance, but just like anything you do a bajillion times, now fails to entice. Have I sent it back to Gamefly, throwing in the towel completely? No. But I moved on for a minute to something else – a game that others have been recommending to me for ages now and was coincidentally on sale at the same moment I wanted to smash in a certain caterpillar’s face with my hobby horse: Torchlight. I chose the bespeckled alchemist character, named him Magellan, gave him a kitty companion and set out to see what the hoop-la was all about.

Torchlight was a breath of fresh air compared to the platforming nightmare I had just untangled myself from-no jumping at all! Just hacking and slashing…and more hacking and slashing. Um, and more hacking and slashing. Okay, not terribly interesting, but it was refreshing in the same way eating oatmeal is-not too tasty, but does the job and makes the hunger pains go away-especially in relation to what I had just set down. But…I don’t know guys, the more I played Torchlight, the more boring it got. Sure, the random loot cache is interesting, but it was better in Borderlands. And sure, it’s fun to min/max your character with the best of said loot, but that was better in Dragon Age. I am a huge fan of a linear loot progression-once I choose a mage, I just want to see mage weaponry. I wanted to be a mage and stay a mage. All mage, all the time. The least available random weapon stolen from dungeon crawlers? Wands. /sigh

One night, during a session of slayage ala dungeon, I fell asleep. I distinctly recall being inside of the Lost Fortress at the time, wandering down dark corridors and hacking away at flyers and creepers, but when I woke up I was next to a merchant in town. I can apparently play Torchlight literally in my sleep. I don’t know if this makes it a great game. It’s possible I am just amazing.

I do love the graphics and the environment-the spell casting is pretty magnificent. The variety of upgrade choices you can make is on par with the likes of Dragon Age and other more high budget RPG titles. Movement is fluid and easy. But in terms of narrative and innovation, I guess I just don’t see why Torchlight was lauded so lavishly. I know that the sequel is on its way, so I hope the influx of support will expand their horizons and allow for more depth, because I think it has amazing potential, it just lacks any real unique qualities. All of the things I enjoy about it I’ve seen done better in other titles. That being said, playing Torchlight certainly served as a fulfilling break from Wonderland. I’m headed back, specifically because I want more dresses. Wish me luck.