Video Games in the Wild 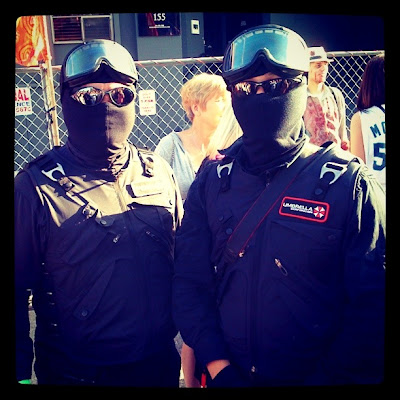 We decided to participate in the annual Zombie Walk this year, assisting Seattle in its attempt to steal a Guinness World Record for largest measurable zombie hoard away from New Jersey. We broke it with 4,522 blood-drooling undead attendees, so hooray! I find the most amusing bit about hand crafted zombie outfits is how costumey they are in their construction. It's as if each participant stepped into their closet Saturday morning, surveyed their options and decided that last year's Halloween costume was the best candidate for zombification. So instead of a bunch of boring old 'human-like' zombies shuffling about, it inevitably turns into a huge undead costume party. I like to imagine that should-nay, when the zombie apocalypse is upon us, everyone's last gasping thought will be to yank on an Elvis jumpsuit or a slutty Alice in Wonderland getup before succumbing to the virus pumping through their system, as though shuffling around this barren world in fairy wings will gain you some sort of edge in the living flesh department. 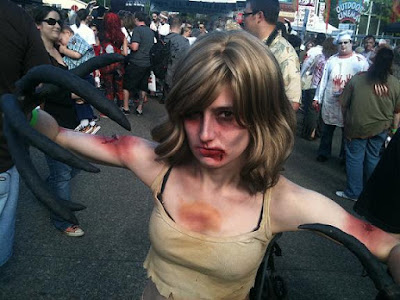 Along this vein, we encountered Mario & Luigi, probably unrelated to the naked plummer duo from my last post (although in the same location, the Fremont neighborhood), but still adorably disturbing. There were a couple of witches running around ala Left 4 Dead, and a couple of members of the elite Umbrella Corporation on hand to keep everyone under control. When it comes to choosing a zombie persona to don for a day, video games seem the perfect media to turn to for inspiration. Sadly, I missed getting a photo of a Silent Hill nurse and the Zombie Link, whose shield was covered in blood. 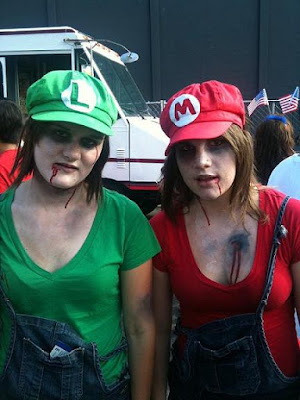 All in all, another great summer day in Fremont-this time with no rain, just brains.