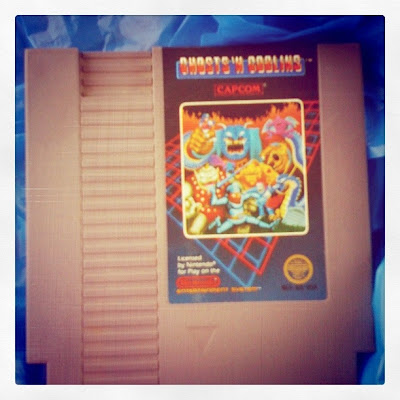 I started my love affair with video games roughly around the same time Nintendo released Super Mario Bros. and Duck Hunt in dual in cartridge format. Tragically (melodrama added for emphasis, not to make my mother feel guilty) our family wasn't rich, so my brother and I weren't spoiled with an endless rain of gray plastic boxes, our choices limited to the first two Zeldas, Friday the 13th, Dr. Mario and Ghosts N' Goblins. If we had more than that for the original NES, my memories of them have been scrubbed clean by the bright and shiny new experiences of today. It's possible that those were the best and worst of the bunch, the best being the original Zelda cased in gold and the worst being Friday the 13th, which I have talked about in previous blogs (I have no idea why I have so much to say about such an insignificant piece of licensed fluff, but there it is). But if I could name my arch nemesis of the video game world, it would be Ghosts N' Goblins. Curse you and your naked little knight to the seven levels of hell, Capcom.

Ghosts N' Goblins is my white whale -- the one game in my life that I truly had desire to finish but found the task utterly impossible. Sure, I've given up on plenty of games due to lack of interest or because my hands no likey the controls, but nothing compares to GNG in the super failure department. Being a little girl who liked bats and Halloween a tad more than the other little girls in my class, the idea of a scary game with creepy music, zombies and a graveyard setting sounded spooktacular. I mean, I had already conquered the Adventures of Link -- what couldn't I do? As it turns out, the answer was get past the first level in Ghosts N' Goblins. Hours, days and months passed and still the haunted forest remained my torturous prison, limitless Continues under my now shabby and well-worn belt. I am sure my brother was able to do it, but if so my sense of self-preservation has blocked that out completely. Time passed, the SNES was born and newer, shinier titles replaced the old. GNG was forgotten like so many dusty titles from the NES era as the path was paved for A Link to the Past and Star Fox, Chrono Trigger and Final Fantasy III.

But I'd never forgotten about Ghosts N' Goblins. Any time I found myself in a retro game shop I would paw through bins of old cartridges, hoping to find it nestled innocently amongst the other titles of yesteryear. In order to make this coming together more organic and less forced, I vowed to purchase it during a chance real-world encounter, without the ease of a online shopping cart. And finally, yesterday, while visiting a out-of-the-way little used game shop in one of the stankiest parts of Seattle, I pulled out a large bin of perfectly alphabetized NES games and found FOUR copies of GNG. Scouring for the one in the best condition and confirming with Matt that we had easy access to our NES (of course, he replied nonchalantly), I shelled out $8 and the deal was done-and this time I would prevail. How silly-nay, how naive I was to believe that twenty years of training could lead to a victory over such a clever master.

Matt & I took turns playing the first level for over an hour. Much cussing ensued. Between the two of us we managed to die in the forest dozens and dozens of times. We memorized the landscape, the enemy pattern, when to duck, when to jump-but nothing worked. And then the game rewarded us with a new weapon-instead of a spear, we now had fireballs. Hiss, groan, the fireballs turned into a handicap that we never overcame, as their trajectory was limp and ineffectual. I left the room briefly and returned to Matt joyously cheering that he had acquired knives instead! With knives, we would be unstoppable, right?! ...we were stoppable-and killable, and fall into a pit-able. And then...just when I had almost succumbed to the maniacal mastery of the Ghosts and the Goblins, Matt decimated the rhino-boss and was rewarded a key. A good omen, to be sure. A page in my mind instantly turned and my eyes beheld a brilliant sight-the Second Level. Success! Invigorated by our joint achievement, I set forth to clobber the flying beasties in this new area...and was utterly murdered for 30 minutes straight, thus crushing my dreams and any desire to keep playing.

Is Ghosts N' Goblins simply a crap title, full of the same glitchy, pixelated graphics and tinny, repetitive midi music that plagued so many nostalgia-inflated games from our youth? After watching someone run through the entire experience in 22 minutes on YouTube, I have to say that I can still see its greatness and feel humility in its presence. I'm not sure if I will ever get through it, maybe it exists to remind me of how games used to exist for the challenge alone-they didn't have to be beautifully rendered and contain depth and emotion, because they allowed us to simply play for the win. To complete goals and feel accomplished. Did the knight even have a name? I never knew his upbringing, his motivations for saving the purple-haired damsel or about how he ended up in a haunted forest near a towering mountain in red underoos. It never mattered. What mattered was the reflex, the quick maneuvers and the ultimate ya-hoo moment after a lengthy bout of Continue screens. These games were about championing an interesting setup of trials in order to feel like a conquerer.

I thought that revisiting my arch nemesis would be a easy victory. Instead, it was a nostalgic defeat. It's possible that I've become lazier as a gamer, evolving my skillset around the easier to play yet more fulfilling experiences of today. But that is a-okay with me, as I connect with games on a much deeper level now than I did when I was a little girl. My hands and my eyes used to be the only tools I needed, but now my heart is more involved. So in that regard, Ghosts N' Goblins, you will remain my white whale-my one that got away. And although I know others who still seek the pure sense of challenge when they play, I now know that I prefer to interact with my favorite titles based more on the sense of immersion and captivation more than merely overcoming adversity.