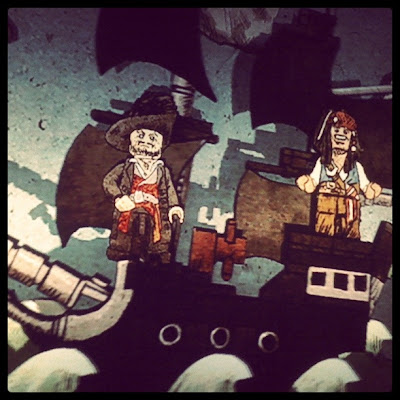 I loves me some LEGO games. Well, wait. Let me say this properly. I loves me some LEGO games that are based on movie franchises I can watch over and over again. With the exception of Harry Potter, I can't think of a series I would rather play in teeny LEGO form than Pirates of the Caribbean. (Possibly Hellraiser-more seriously, Back to the Future.) I didn't know that the fourth movie was featured in the game, so luckily I was able to catch it at the theater before the game was dropped in the mail. Beyond the films, however, I have been marveling at the Disneyland attraction since I was a little girl. My grandparents lived in Southern California and summer visits during school breaks often included a trip to the park, where I insisted we spend most of the day nestled within New Orleans Square, popping between the Pirates of the Caribbean ride and the Haunted Mansion with its holographic, grim grinning ghosts lurking at every turn. I have been back twice since the release of the films, and although its fun to play 'spot the Johnny Depp/Jack Sparrow robots', I still like the old mechanical players with their chins perpetually dripping from overindulging on bottles of rum and their cheeks forever flush with plump, old school Disney charm.

Truth? I went to Disneyland with my mom last year and insisted we visit the attraction three times in one day. There is no feeling in the world quite like the one you get during the first few minutes of the ride, floating slowly through a Louisiana swampland at twilight, fireflies dancing off the water while notes from a banjo twang nearby. And then...whoosh, the first flume. Dead men tell no tales, indeed. My heart goes pitter patter just thinking about it. 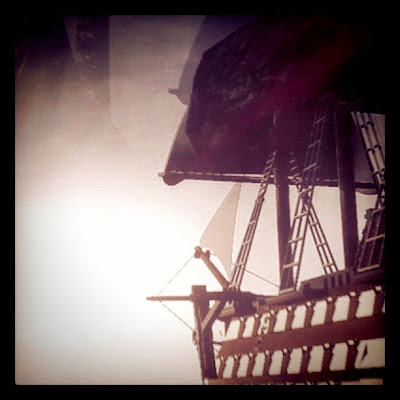 There's a sort of calm that comes from the repetitiveness of breaking everything into tiny studs and gathering them up into bushels of rum-soaked love. I am only about 10% in, but definitely see visions of 100% completion swashbuckling in my head.

Email ThisBlogThis!Share to TwitterShare to FacebookShare to Pinterest
Labels: LEGO Pirates of the Caribbean