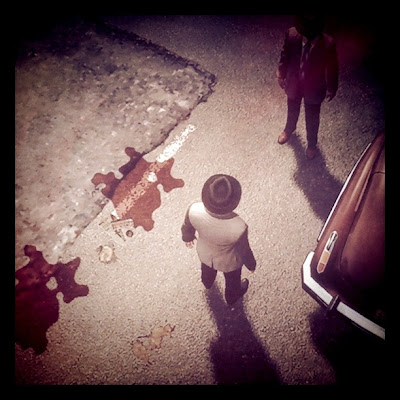 If there is one word everyone is associating with LA Noire over and over again, it’s real. The graphics are so realistic, the city is based on what Los Angeles really looked like in 1947 and the facial and body movements look so darn real. This is the attracting element that Rockstar and Team Bondi had been stoking everyone’s marketing fire with for months now. But when a game introduces itself as being so close to reality, it sets up a sort of precedence what you are experiencing should be taken as such. And not much about LA Noire is real. In fact, much of it feels like you are constantly being led on by the writers. One of the more successful mechanics in the game is the interrogation process. The game truly makes you believe that your senses rule the environment and using your gut instincts is paramount to triumphing over the bad guys. But this could only work effectively if multiple outcomes resulted from personal choices, and that was never the case. The narrative remains on a rail, accommodating around your decisions but never overly influenced by them. I was manipulated into thinking that my choices mattered, when they never did. I was led to believe that Cole Phelps was the only decent man in the LAPD, but he was merely trying to rise above a sordid past. I was told that I was in a sandbox of California delight, but just like all of the stereotypes about the superficiality of Los Angeles, those promises were empty of anything other than structural beauty and showy pride. 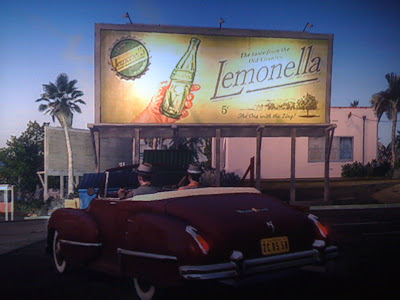 At its best, LA Noire is merely a stylized representation of historical fiction, all surfaces with little substance...more like a stage play with a graceful, painted flat set and one-dimensional, goal-driven performers. And because of this the performances are exaggerated, characters turn into caricatures and all of the elements of real life disappear behind the grandiose narrative drive. No one eats, no one sleeps, no one visits the loo. There are a few casual mentions of domestic, post-work life beyond the nonstop investigatory process, but no one goes home at the end of the evening after punching out and hanging up the gun for the day. Children are almost non-existent and never out on the streets where all NPC’s seem to have one goal: to end up beneath my tires. Women all have the same severe hairstyle and red lipstick, serving as secretaries and lounge singers but not respected leads. You can stand in front of Grauman’s Chinese Theater, but an entrance is elusive as it does not pertain to any interactive environments within the case files. The guise of an expansive city, locked away behind cardboard facades.

Although I wasn’t terribly convinced by the twists and turns in the central plot, I have to admit that the subject matter had some depth. The narrative was twofold, set in the present and through a series of flashbacks from WWII Japan, parallel and perpendicular lines tying everyone together in 1947 Los Angeles. The rise and fall of Cole Phelps was imaginative and engaging, while the rise of Jack Kelso even better. With the sharp pin stripe suits and jaunty hats, Team Bondi could have devolved the story into something akin to the early American idealistic heroes encapsulated within the noir novels, rescuing long-stemmed dames and haunting speakeasies, but they never did. The dialogue, while peppered with dialect, never sounds comical or farcical.

[TWO PARAGRAPHS OF SEMI-SPOILER MATERIAL AHEAD - NOTHING SPECIFIC, BUT...]

It becomes extremely difficult to suspend disbelief in the story during a midpoint in the game, however. Our lead, Cole Phelps, is a model police officer that climbs the ranks from Traffic to Vice quickly and seemingly without effort. His partners are so ridiculously idiotic, constantly refusing to see evidence and patterns in the crimes in which they are investigating, that it is obvious they are merely supporting cast members sent in to make the spotlight on Phelps even brighter. He is the golden boy, a star detective, headlining every newspaper, a look of pride mixed with a touch of humility on his face while praise is heaped on him by his superiors. Suddenly, the scene turns bleak and Phelps is reduced to merely a man once again. His fall from grace should have been epic, considering how morally devout his performance has been to this point, but instead he is merely mocked by his coworkers and given a new caseload on the arson desk. Nothing about this transformation feels like anything more than a twist in a crafty story arch - the foreshadowing should have been evident from disc one, but instead a steadily moving plot turns on its face, then swivels around again as Phelps gets back to work. Instead of being captivated, I was disappointed.

In stage plays they call something similar to this deus ex machina or “The God in the Machine”. Usually it refers to a neat little tie up at the end when it becomes obvious that the characters themselves are overwhelmed by loose ends and need a little supernatural assistance, but I feel like an insensate plot device used primarily to add more drama to a narrative is just as lazy. Instead of the previous feeling that I was commanding the ship through careful investigatory tactics, the sense that I had any control over the mechanism was instantly gone. I had been asked to use my instincts and gut feelings to determine outcomes throughout the entire game, even when the game itself wouldn’t let me, so not having any real premonitions about the darker nature of Phelps felt like a betrayal. 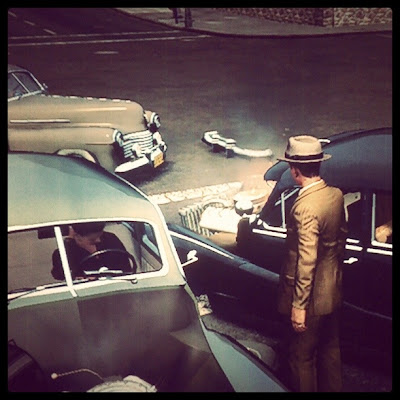 Although visually constructed like a sandbox game, LA Noire doesn’t exactly follow the paths of its Rockstar predecessors. The investigative trail is a fairly linear one, interrupted only by brief street jobs to put away petty thieves and bank robbers. With the exception of location hopping, the only real exploration you are nudged to do is find thirty different Los Angeles landmarks, but even those are merely drive-by experiences. It’s only confusing to those hoping this would be GTA: Sam Spade, I suppose, but it’s appearance is fairly deceiving when you open the menu and pull out a giant map of Los Angeles that looks just like the ones in Vice or Liberty City. The game is almost action-free, which is probably the biggest reason I enjoyed playing it, focusing more on human and social conflict than urban conflict. Corruption is nestled deep into the core of Los Angeles, and as a player, you need to root it out using your sense of intuition and evaluation more than forcing the desired answer with gunfire. Clue gathering is a central element to the core gameplay, and probably my favorite mechanic overall. A true detective leaves no stone, hairbrush, or watermelon unturned. 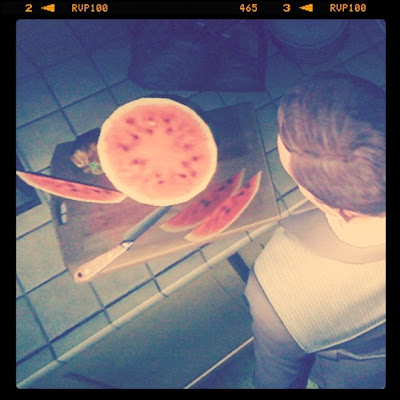 If you can’t describe the narrative as anything other than linear, then why place it inside a sandbox environment? Well, I believe it’s because Rockstar just loves developing expansive, well designed environments for players-and apparently, Team Bondi agreed. And transporting from location to location sure isn’t as fun as driving around in it. I found (re: commandeered) 71 out of the 95 different cars throughout the map, but don’t ask me to tell them apart. I do know that driving some was akin to maneuvering a tank, while others jetted along with ease and speed. A beautifully rendered little model of Los Angeles is encapsulated in LA Noire, and smoothly driving through it is ridiculously fun. I unlocked the achievement for going 194.7 miles pretty late in the game, which was surprising considering just how much pavement skidded neatly beneath my tires. 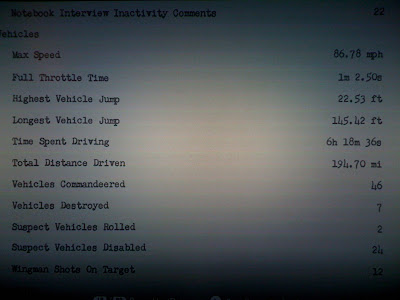 As a game, I believe that LA Noire is successful. It is innovative if you never played Condemned, CSI or Sherlock Holmes because of the poor design and low budget qualities. Or if you liked Heavy Rain but didn’t like the constant cloud cover and finger extractions-and longed for more car chases. I am a big fan of the crime genre in gaming, loving the mechanics associated with sussing out information and peering at objects to determine whether they hold the key to solving the investigation. There is something quietly rewarding about matching objects to interrogations, making your heart race even while the room is silent and still beyond the scratch of a pencil or a nervous hand gesture seen through the corner of an eye.

When I first heard about LA Noire, I imagined a dark alleyway, lit only by the cherry from the cigarette of a notorious bad guy, and grim characters with shadowed jaws and sullen eyes, tarnished by corruption and greed. After seeing some of the screenshots and the motion capture mechanisms, my vision of what it would be like didn’t change, only got grittier. And I did expect something akin to GTA, with a foul-mouthed protagonist and a open world. Instead, LA Noire is much more lighthearted than I anticipated, with fresh faced police officers walking the bright, sunny streets and the big criminals being more of the white collar type than the Gotham City creepers. This view, along with my preconceived notions that the game was going to be some sort of paradigm for ‘reality’, were quickly dismissed a few cases into the narrative. When you start seeing it like a great interactive play, the game gets more engaging and the missing details no longer matter. Taken at face value, LA Noire is innovative and Team Bondi should be applauded for their effort in bringing Los Angeles, circa 1947, to life…even if the paint is peeling on one side of the backdrop, an actor forgets his line in act two and trips over a prop in act three. All is forgiven.