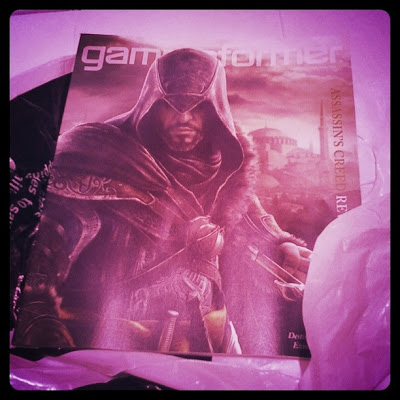 After being lied to by two different Gamestop employees concerning purchasing a damn magazine within the hallowed halls of their strip mall temple, I finally was able to get my hands on the newest copy of Game Informer with Ezio gracing the cover. Sadly, my week has been so chock full of socializing and LA Noire-ing that I haven't had a chance to crack it's shiny cover open with a tiny pair of tweezers in a airless room while wearing hypoallergenic gloves. *wink* Luckily, a holiday weekend is looming on the horizon, with plenty of time to bring peace to Los Angeles and savor the juicy Revelations teasers. I am still resolved to stay positive about the future of the franchise-not reacting the same way I did last year concerning Brotherhood, all huffy and nervous about the quality of the single player content in relation to the multiplayer hype. Of course, you could say my sudden change of heart is due to the fact that they are showcasing the single player environment almost exclusively this time around, with only an aside here and there noting that the multiplayer will still be included. So...yeah, I won't lie, the focus on Ezio and Altair's ongoing plotline is pure seduction. I am just going to assume Ubisoft got my letter.

Truth be told, I am actually ridiculously excited about the new Assassin's Creed release. Instead of avoiding the press in fear of serious spoilage, I am going to spend the next six months wallowing in beautiful screenshots, listening to Ezio's gravely romance novel voice-overs, and joining my fellow fans on message boards and blog sites, tossing my two cents in when they speculate about how the franchise is going to pursue it's eventual progress toward present day building structures and weaponry.

And one day I am going to sit down and unravel an utterly compelling argument about how the series is really just an interactive love affair with art and architecture from ancient to modern times in Western Civilization. *double wink*