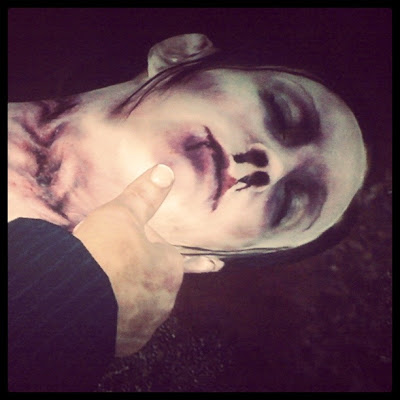 A disturbing image, to be sure, but one that represents just how fearless L.A. Noire is with its depictions of grisly murders. The one thing about attempting to achieve hyperrealism-it really has to sell itself as such, bloody noses, bruises and all. I peeked into the achievement list for the game and found that the highest rank you can aspire to is Arson Investigator, which is awesome. I like the homicide division because it seems like bloody weapons are everywhere, crimes of passion are frequent, and the suspects are all super shady, but all of these brutalized ladies are making me a tad sick to my stomach.

If they are going to base all of the characters on living, breathing people, I think I would prefer that they be completely unrecognizable instead of using semi-famous actors. It’s akin to watching an animated film where all of the actors voices are incredibly distinct and you can’t help but imagine them as their public persona instead of the character in which they are depicting. It sort of breaks the fourth wall. Plus I find myself being slightly disturbed by the fact that unless you are interrogating someone, people often forget to blink. In other games this minute detail would not matter in the slightest, but when you are sitting on your couch marveling at eyelashes and perfect half moon fingernails, the unblinking stares are unnerving.

Another thing that seems a little off is the head versus face shapes. Occasionally the neck movements of the perps during the investigation process slide the facial features into the shadows of their jaw lines. It appears almost as if the faces are being projected onto balloons, and any jerky tilts or shakes put them slightly off their perspective centers. Luckily, the lead detectives were built with sturdier stuff and this oddity only seems to occur on the mugs of the various suspects and interviewees. I know it seems like am being excessively nitpicky, but it's difficult to find the line between where the designers are attempting to achieve something cutting edge and where the whole uncanny valley theory comes into play. But it truly is remarkable, and I really don't want to take anything away from it's progressive and innovative qualities by being overly critical.

I have progressed to the point in the narrative where it’s not as obvious whether the people being interrogated are lying or telling the truth. Sometimes the evidence doesn’t place a flashing neon arrow in the air, and even when someone is lying they could be doing it with a calm and straight gaze. These little details are so compelling that you can’t help but end up in a case loop, telling yourself that just one more street job won’t take much time, no matter how long ago the sun went down and what time your alarm clock is set. I watched the moon make a full trek around the my living room from east to south last night before I reluctantly trudged off to bed.

And amazingly, sometime during the evening my index fingers and my brain made some sort of connection and I mastered steering the lugging vehicles in a straight line, as opposed to the erratic snake shapes I am famous for on the streets of Los Angeles. I may not be able to take a corner without crushing a mailbox or the occasional bench, but there appears to be hope for me yet.

The cars are beasts, to be fair - it's really hard to not oversteer.

They are tanks, to be sure. I found a sporty little number and have been cruising around like a bat out of hell for awhile now. :)