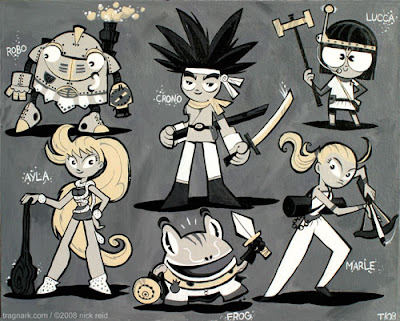 I suppose it would be terribly irresponsible if I didn’t mention that Chrono Trigger has been slated for release on the Wii’s Virtual Console on Monday. If you’ve never played it, you should. I’m not too hot on JRPG’s anymore, but when I was a teenager Chrono Trigger was the dreamiest dream come true. I remember the awe I felt the first time I saw the shadow of a winged beast against a beautifully rendered moon, and can still hear the slight mew of Chrono’s kitty prowling around his bedroom before he heads to the fair. My relationship with Square (Enix) was glorious, and I played round after round of Chrono Trigger, FF3 (SNES) and FFVII. Sadly, the formula no longer holds my interest now that Western games have seduced me into their adventurous arms, but I am considering another go around purely for nostalgia’s sake.

Link to neat picture above, used without permission.

Email ThisBlogThis!Share to TwitterShare to FacebookShare to Pinterest
Labels: Chrono Trigger, In the News