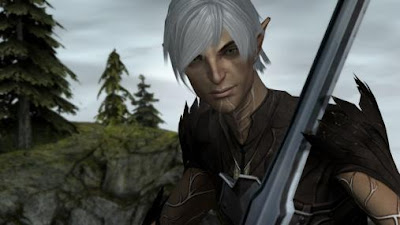 [ARE THERE SPOILERS? DOES A GIANT SPIDER DROP MONEY IN A CAVE?!]

After being labelled a despicable mage full of tainted, power hungry blood that tempts beyond measure, my lover turned cohort, Anders, and I have taken to the hills after a horrible massacre in Kirkwall, where all of the major authority figures were felled beneath the judgement of a magician’s staff. Anders may look innocent, but pray you don’t mistake that shocking blue glint in his eye for charm as I once did. He means business and won’t be caged anymore-and no matter how sweetly he continually declares his love for me I can see Justice steering from his shadow. Our freedom is also our downfall, as we are forced to hide in the mountainous regions beyond the fallen city and into Ferelden once again. But I know we will be victorious because our decision to side with the mages, our kin, was absolutely right. One day everyone will understand that not all mages are created the same, and that some of us can overcome our more primal urges for power and continue on the path of morally good and ethically sound. Oh, right, except for that one hot night with Fenris...

And so goes my initial playthrough of Dragon Age 2. I am starting Playthrough Two tonight, but I just couldn’t wait to gush some of my thoughts and emotions about the sequel to the massive endeavour that was Origins. If I could sum the experience up in one word, I think that word would be giddy. I think that DA2 was supposed to be extra serious about the heavier topic at hand, that is, the conflict between the Templars and the Mages in a small, yet grand, walled city beyond Ferelden called Kirkwall, giving everyone steely eyed determination and long-winded speeches complete with furrowed brows and clenched teeth, but I just didn’t buy it. From the get-go the narrative is tinted with a kind of coy mirth as our narrator, Varric, tells a tall tale to a demanding Chantry Seeker concerning ‘The Champion’ and her sibling taking on a horde of darkspawn. When I picture it in my head, I see an amused dwarf holding his hands apart in a gesture that tells his audience that the dragon was “THIS BIG”. Nope, it wasn’t, but my sister’s plushies sure were. Holy crap, BioWare. Could you keep the bodacious ta-tas off my mother at least? Yes, yes, darkspawn, Ogre, Flemeth, all scary and very un-funny. Oh, but those hair horns?! Hilarity abounds. 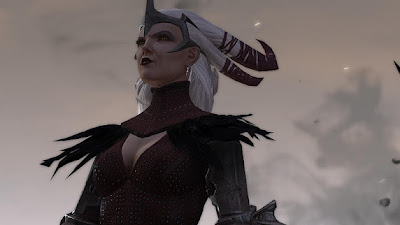 Once you get to Kirkwall and the overarching storyline starts to piece itself together, it becomes clear that Hawke’s tale is going to be much more compact and localized than the heroic saga in Origins. I suppose we could've guessed from the beginning, since Hawke is merely a champion and not a hero. At first I was disappointed by this, but then I became so distracted by the dungeon clones that I forgot all about the diminutive narrative and instead focused all of my disgruntledness on the copycat areas the game takes you to during it’s endless mission checklist. Hey, Hawke? Go to the Wounded Coast and kill some shit. Check. Okay, now go back to Kirkwall and see Aveline. Check. Could you check on Darktown? I think there are some slavers there to kill. Check. That locket you found while unselfconsciously rummaging through a pile of bones? Take it to a gentleman in Hightown and selfishly demand a reward. Check, check. There is zero encouragement to explore areas that don’t contain a flashing arrow pointing to them on the map, which is how I completely missed Isabela during Act One of Three. It was during Act Two when I realized that my robotic movements through Act One had caused me to miss a crucial party member that I slowed down and started to really embrace Origins's cute little pinchable cousin of a game.

For me, the real strength of DA2 lies in the interactions with your companion characters during your ten year stint in Kirkwall. Now, I know you could fully embrace all of the characters in Origins and take their missions upon you, but I never bothered. I only really liked a few of them and even then I grew bored listening to them talk about themselves ad naseum before I could finally count them as friends or lovers. And playing Awakenings made it even worse when it cut out the ‘getting to know you, getting to know all about you’ objective entirely. In the sequel, your much smaller group of companions is incredibly well designed and desirable. There is more involved than just being a 'good listener' or 'giving great gifts' to gain an individual's favor. As time progressed I realized I barely cared about the story thread winding its way through the three acts and itched to have the opportunity to interact with all of my party members. I maintained a mutual respect with Aveline, my warrior, threw meek Merrill down in the dirt as often as possible (Achievement Unlocked: Rival!), gave affectionate guff to Varric, my loyal rogue, and romanced my mage-mate Anders while still seducing Fenris, the lyrium infused, mage-hating elf who hated to love me so much (most awesomely awkward in-game sex scene ever). I loved them all. I can’t wait to join them (and finally pick up that gypsy chick) in my second Playthrough, where I do it all over again in a much different way.

I could go on and on concerning the ways that Hawke’s story doesn’t live up to the expectations as set by the enormous saga in Origins. As I stated before, the 'narrative that could fit in a shoebox' was much different than the grandiose Warden objective to save everyone from an Archdemon. And spending thirty hours diddling around Kirkwall and it’s surrounding areas was very constrictive after experiencing the geographically expansive country of Ferelden. But taken alone, without piggy-backing on the shoulders of such a well-received game, I think DA2 deserves it's own accolades. The character interactions are compelling and tidy, the voice acting is fantastic, the awkward kissing and lovemaking scenes are touching and made me giggle with glee, the fight sequences are highly responsive and clean (even if they go from ridiculously simple to holy shit, a high dragon) and the conclusion halting and abrupt but still digestible. I was initially worried about the dialogue wheel because I thought it would unconsciously steer me into being consistent with my responses, but I was never once tempted to constantly choose the olive branch of peace. Using the sarcastic choice just added fuel to the giddy fire as it led to the best NPC responses. I imagine if you decided to be cheeky the whole way through the narrative balance would teeter significantly, bordering on absurd. Or you would just be perceived as a total a-hole. Either way, these little touches kept me from taking any of it too seriously, which was unexpectedly charming. I sensed the game was winking at me the entire time as though we were in on the same joke. Overall, playing Dragon Age 2 was the most in-game fun I have had in a really long time and I am delighted to do it all over again.

My second go around is officially called “What Would Fenris Do?” Trying to 'thoroughly' (re: marriage, tattooed babies) win him over as a mage was a lesson in futility as he really hated me and 'my kind'. And here I thought I would never love another elven pretty boy after my tumultuous and decidedly dirty affair with Zevron...