PAX East Round Up: Warp Preview 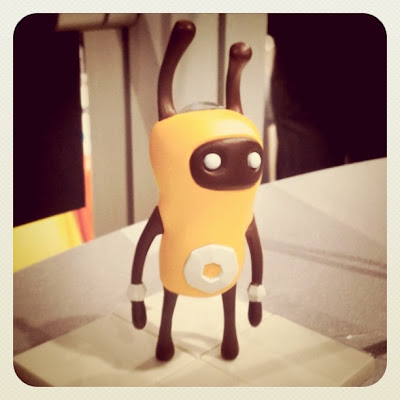 While wandering the expansive Expo Hall during PAX East, it was hard not to hear whispers and mentions of a little game off in a back corner called Fez. Without knowing anything at all about this new indie title, I thought it would be a good idea hunt around to see what the buzz was all about. After finding it and thinking, ‘yep, that little spatially interesting platformer sure does look neat’, my attention was instantly diverted to another upcoming indie game sharing the same block of space as Fez. I delicately shoved through the small crowd surrounding a console/television combination guarded by a tiny alien figurine. And what I found was Warp, a new mini-stealth and splatter game designed by Trapdoor. Call me new fashioned, but the slick graphics and adorableness of my newfound alien friend called out to me more than the blocky art style of Fez.

I didn’t get a chance to actually play Warp that first day, but it stayed in the forefront of my mind the following afternoon when we headed back into the mob. An adorable antennaed alien, brief glimpses of men in long white lab coats exploding into red splashes on floors and up walls…I needed to know more. I convinced Matt to head over with me and he was patient while I anxiously waited for my turn, taking the lovely profile shot pictured above. A Trapdoor employee was on hand, answering questions about the gameplay without revealing any real information concerning platforms or release dates, but EA is listed as the publisher, so at least it seems that they are secure for now.

Finally, it was my turn. The first thing you see is a small room where an alien critter named Warp has been imprisoned by…well, I’m not sure, but it looks sort of like a military laboratory in space. The doors swish open with the same noise as those in any good science fiction spaceship and the halls are silverish in color and lined with technological ropes and doodads. The perspective is semi-top down so you can see the tops of the technicians's heads as they shuffle about doing serious research-like business. Warp, understandably, is not happy about being captured and your objective emerges-you must help him escape. But unlike other games, where stealth/escape mechanics involve a lot of waiting behind doors or hanging out of windows, patience is not the only weapon at your disposal. Warp has the ability to transport, or ‘warp’, himself through walls, under doors, into different objects and even inside the people wandering about. But instead of functioning like a possession, where the person turns into a controllable puppet, the bodies you inhabit in Warp start shaking uncontrollably and explode, splattering the room in blood, as though you have just taken a can of red paint and dropped it from the tenth floor. And let me tell you, this reaction is ridiculously entertaining. We cackled in glee every time it happened.

At its heart, Warp appears to be a stealth game. When you transport through walls and doors into new rooms, it’s important that Warp isn’t seen or else the one shot he receives means instant death. When he possesses someone it’s vital that he moves to the next person or object quickly because that person/object will start shaking and any guards in the room will become suspicious and shoot you. If the doctors see one of their comrades start shaking and explode, they realize something terrible has occurred and start weeping in the corner with their faces in their hands. Having the NPC’s aware of what is happening to their companions and visibly react is a nice effect. The demo ended with Warp entering a pretty brutal looking room, lined with dangerous looking robot killers and lasers, leading me to believe that the difficulty will intensify as you progress. This small taste of Warp was more than enticing enough to keep the game on my short list for (hopefully) sometime this year.