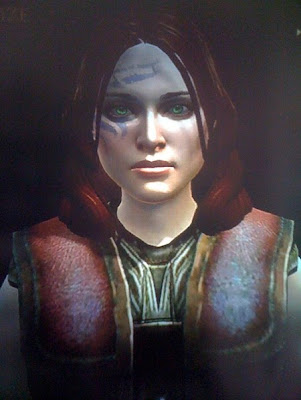 If I have one teensy tiny little disappointment about Dragon Age 2, it's that its release date coincides with our trip to Boston for PAX East. It's wonderful to be back in...well...Kirkwall, near Ferelden. I have been playing two classic titles in the past couple of weeks, Psychonauts and Beyond Good & Evil, but as great as both of them are it's a breath of fresh air to play the sequel to Origins. I don't want to be one of those people that has a hard time looking backwards, but I have to admit that I am craving my new champion's story far more than either of the games from the past. And now that I am toe deep into Hawke's tale I am pretty sure the others will not receive any further attention until I am done. I am fairly well known in my inner circle for exclusively kicking it new school.

I will also admit to spending about 45 minutes in character creation, and I am quite satisfied with my Hawke. I am a little obsessed with facial tattoos-I long for the day they are fashionable and acceptable in real life but confine myself to putting them on my avatars. She is a mage, just like my character in Origins. I also chose to carry over my save from Origins to keep the story consistent, but after a few hours in it doesn't seem to matter beyond one mention. But I do like that the one mention was about 'her' and 'her companion', which would have been Gaia and Zevron, my two travelers. I do find it odd that although our family members looked the same during the demo, Matt's male warrior has a completely different looking family than I do in my game. The characters are the same, just with new noses, eyes and other facial features. Oh, and also-[MINI SPOILER ALERT] I love Flemeth's hair horns. Seriously, best ever. 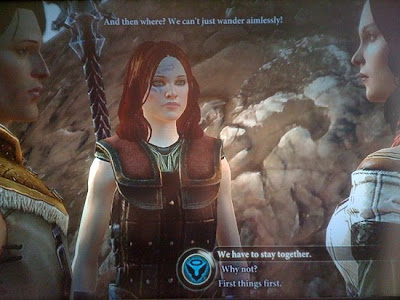 I am going to try to do a bit of semi-live blogging from Boston. We'll see how much access I have via the over-clogged wifi. Either way, expect updates! Or...see you there!