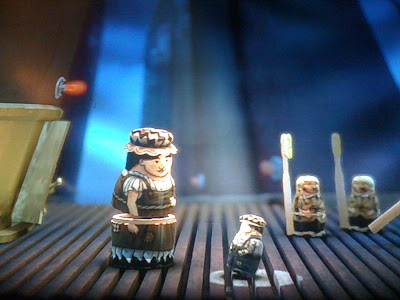 Ah, Double Fine. I think that you and I have a good thing going. Last year you captivated my heart with Costume Quest and now your most recent endeavor, Stacking, has charmed me right out of my recent video game stupor. Keeping this short, but sweet, formula for future adventures would be ideal.

Stacking is set at the turn of last century during the Industrial Age. The Blackmore family is surviving in less than ideal conditions, living mostly off love and the meager pay Papa Blackmore can bring in from odd jobs. One day he comes home in a delighted frenzy, announcing to his wife and children that a mysterious figure named ‘The Baron’ has hired him for real work, guaranteeing they will no longer go hungry. But when he leaves for his first big day, he doesn't return, leaving Mama Blackmore to provide for everyone with little success. The Baron sweeps in soon after to declare that the family must make good on their numerous debts and takes the children as collateral, forcing them to work for him in a variety of enterprises. He leaves one child behind, however, little Charlie, the smallest of the Blackmores, declaring him much too tiny to be an effective worker. Charlie, albeit the tiniest of children, has a powerful determination and an even bigger heart and immediately announces his intention to save his family. And here is where the game starts. Charlie sets off to visit several different areas, a Train Station, a Cruise Ship, a Zeppelin and a Triple Decker Train, in an attempt to rescue his missing brothers & sisters who have been forced to shovel coal or clean smokestacks and defeat the Baron, a notorious overlord to a wicked Child Labor ring. 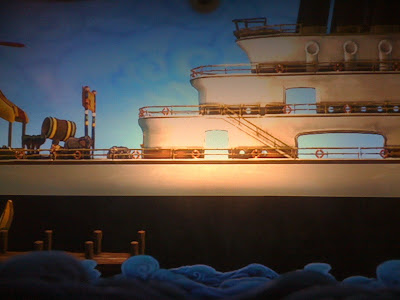 I never thought I’d see the controversial topic of Child Labor used in such an adorable way, but Double Fine manages to display the atrocities in such a manner that gently reminds you of the horrid conditions during the Industrial Revolution without sinking too low into the reality of the situation. Charlie’s small stature makes him the ideal hero to champion his tiny compatriots and defeat the masked evil Baron, keeping the tone light and fun while dealing with such a heavy subject by using 'silent film' cut scenes and brightly colored scenery. With the exception of some innocent eyes peering out from dirty, coal streaked faces, most of the kids deal with this struggle in a childlike manner, using giggling, hide-and-seek sort of mechanics as though the situation is horrible merely because they no longer have the freedom to play tag. In addition to his goal to save his imprisoned family, Charlie becomes the Voice of the People, using his secret weapon to trick the Baron’s goons. You see, he is the tiniest piece of a Matryoshka Stacking Doll Set, which allows him to sneak up behind any other characters/dolls in the environment and ‘stack’ into them, giving him the ability to use their unique capabilities to solve puzzles and challenges. This ‘stacking’ mechanic is the heart and soul of the game, and each level requires a different combination of dolls be used for a variety of challenges, ramping up the difficulty as you progress. And although the puzzles are fun (yet always ridiculously simple), the highlight of the game beyond the engaging and cheek-pinchingly adorable narrative is the different character dolls inhabiting Charlie’s world. 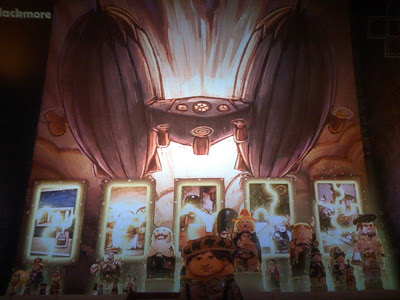 The gameplay requires you to use a variety of different dolls to proceed through each challenge. Each challenge has several different solutions, so you can choose to do the same one multiple times using different methodologies if your goal is to achieve 100% completion. Doing so adds a fun multilayer experience to a fairly simplistic and straightforward progression. One of the tasks is to collect all of the ‘unique’ dolls in each level. These dolls only show up once, as opposed to a handful of NPC dolls that are duplicated around each area. My absolute favorite is the Widow doll. Located in the Train Station, the Widow allows you to ‘Seduce’ male adult dolls in order to move them away from doorways or other guarded areas. As she walks, the Widow swivels her hips and when prompted, does a boom-boom burlesque move that causes the target doll to fall instantly in love and follow her wherever she goes for a short amount of time. The Pied Piper is another great ‘unique’ doll, using his flute to lure groups of mice to ruin certain objects by nibbling through them. Each level contains around twenty of these dolls with personality, and it is great fun finding them and using their abilities to complete what the game calls ‘Hi-Jinks’. Hi-Jinks add yet another level of gameplay to Stacking, prompting the player to use the unique dolls to perform very specific acts of mischief, such as using one of the little child dolls in the Train Station to play Tag with five other tiny dolls or using the ‘Towel Folding’ children to throw sheets over others, making them look like wee little ghosts. My favorite Hi-Jink involves using a female doll onboard the Zeppelin to, um, pass gas, over other dolls – you see, instead of the green toxic cloud that some dolls would exude using the same action, this doll passes potpourri in the shape of a giant cloud of pink and purple flowers all over her fellow dolls. 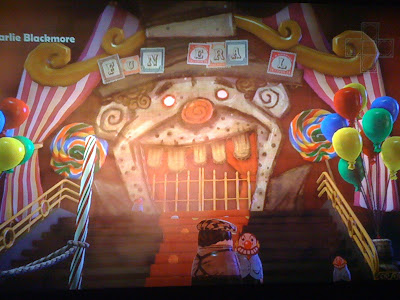 So, yes, many dolls use the power of bodily functions to distract or disgust other dolls. But just like the Child Labor storyline that stays fairly innocent and light, the use of belches and flatulence never distracts from the sophistication of the Industrial steam and coal powered environment, serving only to enforce the idea that this game is told by the perspective of a child. And when you are a child, an adult letting out a powerful and stinky belch is hilarious, not sophomoric. Seeing a giant clown face (as pictured above), is absolutely terrifying in a curious and mysterious way. As with Costume Quest, Stacking reminds you what it is like to see the world through the eyes of an innocent, imagining conquering the boring and boundary-filled world of the adults around you with playful and mischievous behavior. Double Fine does another great job at seeing the world of the grown-ups as fairly useless, counting on the ingenuity and unyielding dedication of a child to beat the ultimate evil, a masked bandit who dares to see Charlie as an inconsequential piece of a larger, more formidable formation...his loving family.

I didn’t love Stacking as much as I did Costume Quest, but then again I am utterly enamored of Halloween and need no additional incentive to be devoted to Wren and Reynold’s tale. Stacking also required you to wander the same areas over and over again if you wanted to acquire that enticing 100% completion score, which was a bit tedious. But after several weeks of failing to engage with any other games, I was delighted to rekindle that loving feeling of immersion while guiding Charlie along his path. I would highly recommend Stacking for people who may need a break from the more serious, expansive experiences of other games and want to spend five or six hours merely having fun in a beautiful environment full of interesting and lovable characters.

Email ThisBlogThis!Share to TwitterShare to FacebookShare to Pinterest
Labels: Stacking