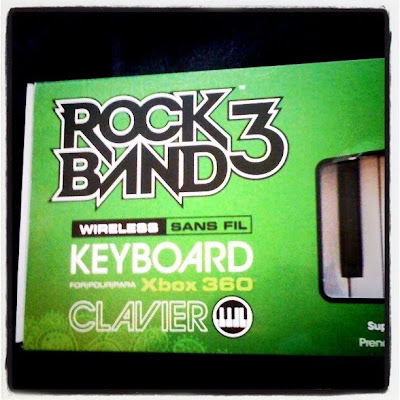 After several months of playing through the new song library in Rock Band 3 with just the standard set of guitars, a drum set and two microphones, Matt decided it was time for us to get the new keyboard peripheral. He tested it out initially using the normal “Keys” mode, but switched over to the “Pro Keys” after only a couple of songs, suggesting I do the same when it was my turn to play. So after settling in with the mini-keyboard in my lap, I gave it a try, skipping over the normal mode and starting with Easy “Pro”. I played a couple of songs without too much difficulty and switched to Medium…where I promptly failed. So…yeah…back to Easy for awhile. It’s a strange thing to have to teach myself a new Rock Band instrument after years of proficiency on guitar and vocals. I was never much for drums, but I find that I want to be good at the keyboard, so not figuring it out instantly is a little frustrating. It’s as though I expect to be great at it right away because the game itself is so familiar. I mean, if I can sing on Hard/Expert Mode and 100% almost every note playing guitar on Medium (Hard Mode makes me feel anxious), why can’t I just pick up another color-coded instrument set and effortlessly start rocking? Overall, though, it’s quite fun to learn something new. And once I figured out several note changes in a row by feel and not by staring at the keyboard intently, I started to feel like it just may be an enjoyable and rewarding experience…eventually.