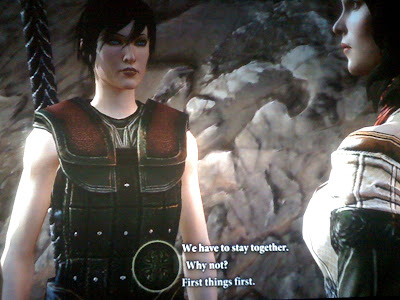 In a moment of insanity last weekend, I came up with a handful of reasons why I wasn’t going to play the Dragon Age 2 demo. One, I like having a continuous beginning to end experience that moves smoothly without interruption, and I find that demos distract from that initial immersion factor. Just when I start to fall in love, the game abruptly ends, cutting off the new and still vulnerable connection between myself and the characters. And two, I’ve already pre-purchased it, so there is no need for a taste test to decide whether or not it is worth the investment, further propelling my determination to wait. But, feelings of excitement and temptation overcame my self control and I couldn’t help but try it out. The demo does give a bit of exposition concerning the narrative direction and how it relates to Origins, but I am not going to mention the storyline in this highlight reel because I still don’t know enough to give it a fair analysis. The visual and mechanical aspects alone show the vast improvements that BioWare has made to the sequel.

Graphically, it’s beautiful. All of the facial structures are softer and the characters move with grace and ease. The demo doesn’t allow you to make any appearance changes (boo), but you can see from looking at Hawke, our protagonist, and her (or his) party members that your choices are going to be vast and more realistic than Origins. You can’t choose between races this time around, Hawke is definitely human, but the Mage, Rogue, Warrior options are still there. I chose a Female Mage, just like my character in Origins, and intend to do so during the real game as well. While it may be fun to try something new, I also like the idea of creating a sort of flow between the two games, even if the character personalities are wildly different. You only see a snippet of the world in direct relation to the Battle at Ostagar, but what is viewable is also more graphically defined, with the lines of scenery sweeping cleanly across the horizon.

The movement and combat controls are more responsive. I found Origins to be a little clunky and slow in places, with combat being the worst (as a mage, anyway, I didn't play any other class). But the sequel has cleaned up much of the slower, heavier movements. The spell casting is swift, using the same functionality as Origins with sets of spell choices assigned via a wheel. And, most importantly, I didn’t hear any of the silly vocal phrases that repeated endlessly in the original after each attack, such as the silly 'If I give you a ladder will you get off my back' mantra I had to listen to thousands of times during fight sequences. I desperately hope that is a permanent change and it wasn’t just an aspect of the demo. Many of the menu system options were locked; for example, even though you could loot new equipment from glittering bodies littered around the environment, you couldn’t equip them and test them out. But the rest of the new menu system is functionally similar to Origins-the interface is different but works pretty much the same way during the level up phase. They altered the assignment of Attributes slightly to show exactly how each skill point actually affects the character's stats, which I approve of wholeheartedly. 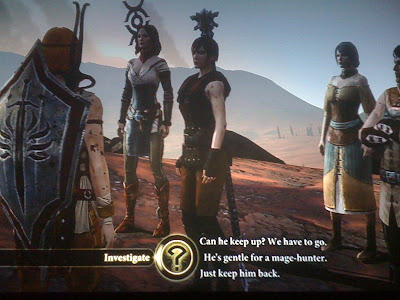 The dialogue graphic is more like the one in Mass Effect than in Origins, with each option displaying a little picture to show more depth of response emotion. If you are being virtuous, or generous, the wheel center will show a little angel picture, whereas if you choose the more impartial or unemotional dialogue line, you will see a little gavel. If you are ‘Investigating’, or asking more questions about the situation, you will see a highlighted question mark. I am not sure how well I like this change. For me, picking which response to utilize in Origins was a more thoughtful aspect of the game that I enjoyed. Even though it was fairly obvious which ones were helpful and which ones were more dismissive, occasionally I could see the value for a couple of exchanges and considered what it meant to me, as the player. By seeing exactly which emotion I will be yielding, I am concerned I will want to be consistent as opposed to reading and considering the inherent effect of every option available.

I am not sure if this is the same demonstration they showed at PAX because I wasn't willing to wait two hours to see it (I chose to wait for the multiplayer Assassin's Creed instead). I died twice during a big battle that I assume was near the end last night and chose not to proceed because it was midnight and I work fairly early in the morning-I figure I will be more willing to lose sleep while experiencing the full game with my customized Hawke. Moving through the teaser highlighted all of the gameplay improvements and updated menu system as well as giving the player some prologue material to introduce the narrative, my favorite part of the original. I did take March 8th off work to take care of the cleaning and packing process before we leave for Boston, so in between I hope to get a few solid hours in Ferelden. But for now...I wait.

I just played the Xbox 360 demo myself. I hate it for one really simple reason.

There's a ton of improvement across the board, I love the responsiveness of combat, but having to mash A to use a character's default attack is really irritating. I've heard the PC is different, but I haven't had a chance to play the Steam demo yet.