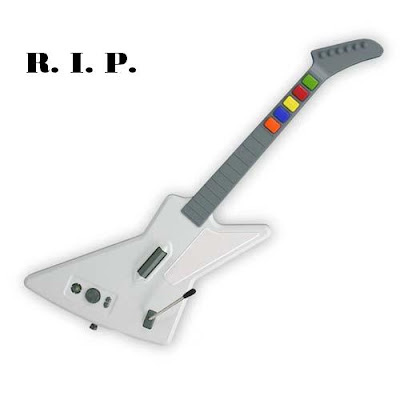 And so it ends, not with a blaze of glory and a grand, firework heavy encore, but in a single sentence on a financial report. Activision has officially announced the end of the Guitar Hero franchise, leaving the musical genre to its successor, Harmonix’s Rock Band. This is pretty fitting, since Harmonix was the company that originally helped create Guitar Hero. But this isn’t a sad, lamenting eulogy about the demise of Guitar Hero; this is a heartfelt thanks to the series for being the spark I needed to get back into video gaming after a several year hiatus post college.

I moved to Seattle in 2004 after a tumultuous and unhappy six months in Atlanta, Georgia where I spent most of my time clicking my heels together in hope that I could return to the Pacific Northwest as soon as possible. During that time I watched my boyfriend at the time overuse my PS2 to the point where it was no longer playable. Instead of offering to replace it, he bought himself a new one. After two years of being a bit of a video game voyeur, watching him play Dark Cloud and GTA: Vice City, I had left behind my more interactive side after a long period of time playing SSX Tricky with my brother and his friends, so I was upset more on principle-I had no real desire to replace it. When the heavens smiled back upon me and a glittering trail of gold led me to the Emerald City soon after, I spent most of my time as a free spirit, exploring my new urban environment with my great friend, Danyale. We built bonfires, painted our eyes black, donned lace and vinyl and spent a year dancing through Seattle’s nightlife in hedonistic delight. No time for video games in that world, it was too full of music, a sparkling skyline and a newfound craving for bubble tea. A year later I was snuggled back into the green-hued suburbs, enjoying the trees and a new partner, who reintroduced me to the world of video games. He played Warcraft and Counter Strike, purchased the best headphones and brought an Xbox 360 into my life.

One day he came home with a tiny plastic guitar tucked under one arm, lent to him by a co-worker. This was Guitar Hero. It was like nothing I had ever seen before and was ridiculously loud. I hated it. I thought the music was obnoxious and he turned the volume up way too high. But in true Jessica style, a visit from my younger brother changed everything. If you recall from previous posts, my brother, Jordan, is my video game hero, my lifelong digital role model. When he took an interest in Guitar Hero 2, I started paying more attention. After watching him dive into the sets without struggling, my interest piqued. He handed me the guitar, turned on Freezepop’s ‘Less Talk More Rokk’ and I was back. I started jamming every night, which soon turned into my own XBL account, evolved into a devout interest in Rapture and Bioshock, fell headfirst and passionately in love with Altair in Assassin’s Creed and have been knee deep ever since. When the aforementioned boyfriend and I no longer came with an ‘and’ between our names, I took it upon myself to purchase my very own 360 and GH3, where my friend Krystle and I co-oped an entire tour together and I made my first move into an online multiplayer environment playing The Killers ‘When You Were Young’. My hands shook the entire time. Whether it was from nerves or several blue cans of Rock Star, we’ll never know for sure. It felt like home.

Alas, this was my last positive encounter with a Guitar Hero game. As the Muppet-faced characters in GH3 evolved into the beautiful and customizable avatars in Rock Band, I picked up the microphone as a loyal convert, never to return. And although it was inevitable based on the ever declining popularity and sales of the Guitar Hero franchise, I will continue to have fond memories of the game that brought me back to the fold.

Au revoir, Guitar Hero – thanks for everything. Especially Carry on My Wayward Son.