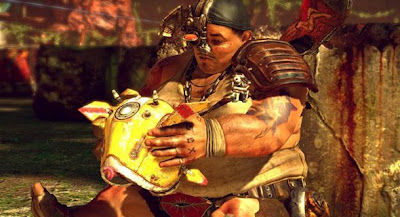 Before I talk about my experience playing Pigsy’s Perfect 10, I need to confess something. As much as I carried on about how simple the combat was during Monkey and Trip’s journey into the Wasteland, describing it in a casual manner based on the simple mashability of our hero’s staff, I found the downloadable content incredibly difficult and would not have completed it unless my loving partner hadn’t stepped in and gracefully cleared out several areas in order to keep me from destroying our living room. You see, where Monkey employed the standard melee technique to defeat his foes, occasionally adding a stun or plasma burst for the more complicated scenarios, Pigsy’s weapon of choice is a sniper rifle. And coming from someone who sold off every sniper she received in Borderlands because my love affair with the SMG was longlasting and sustainable, I can safely say that I was not destined to see the end credits of Pigsy’s journey to find his Perfect 10 without the help of my own.

I was a tad confused when I learned that Monkey and Trip would not be part of the story, and instead the focus was going to be on a character that had little redeeming qualities in the main story and showed up four chapters before the epilogue. Set right before the time when our dynamic duo rendezvoused with him amongst the ruins, our goal is to help lonely Pigsy collect the mechanical components to build the perfect companion-aka a robotic bombshell of a lady. To assist, Pigsy has a sidekick named Truffles, whose appearance is akin to a puppy dog trapped inside of a computer monitor that can fly...yep, I’m sticking with that description. Together they use mainly stealth, a sniper rifle and a mixed bag of patience mechanics - decoys, bombs, tons of concrete pylons to hide behind - to defeat the enemies in their path. It sounds a bit trite, but in the same amazing narrative style employed in the original game, there is more depth at work here than can be comprehended from a brief synopses. Although Pigsy is not the most lovable character, he does learn some touching lessons along the way. There are a few fairly unnecessary collectibles around, including pin-up posters and packages of food, but instead of being persistent, they serve as a sort of nudging reminder of Pigsy's whimsical vices. 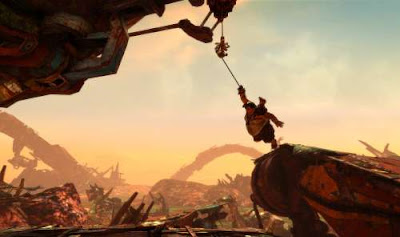 When I talked about Enslaved’s shortfalls, I mentioned the clunky mechanics and infuriating camera angles as the main offenders. Well, Pigsy still has a hard time getting around in his spotlight chapter, but I chalk it up to his bulk more than anything else. You see, Pigsy is, well, a bit of a sloth. And a bit of a lecher. Beyond the complex bits of mechanical modifications he has made to his face, including a chrome colored snout-like object covering his nose, our latent hero has all of the makings of his own stereotype-a misogynistic pig. He wears an upside down kissy-mouth belt buckle and a stained tank top over a hefty, overflowing frame. Instead of the graceful platform to pipeline leaps Monkey performs effortlessly in the main story, Pigsy can only pull himself up onto shorter ledges and must use a grappling hook attached to his arm to get to the higher points in the game. But surprisingly, the aspects of the game that felt heavy and clumsy in Enslaved work much better with the armory that Pigsy employs. The snipe mechanic was clean, the decoy/EMP distracts were helpful and the progression felt much more like a game than the repetitive melee in the main story. Even though the jump ability still felt slightly unresponsive and the cameras continued to be part player driven and part forced POV, the overall narrative plus stealthy stylization in Pigsy’s story melded well in a way the original story did not. Playing them successively was a bit of a shock, however, because although they are set in the same world, trading action adventure combat for stealth creates a sense that you are not continuing in the same manner and tone as before, but starting an entirely new game. 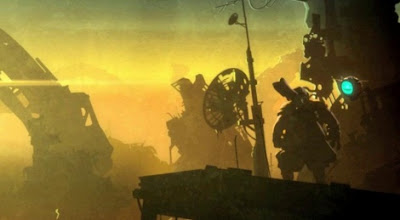 So why couldn’t I have finished it? Well, I am not the most clever girl when it comes to tactical games. And when my melee happy game turned into a lesson in patience and strategy, I was a bit left behind. My thumbs tend to overreact during high stress situations and I am not the best quick shot even when my survival depends on it. Instead of taking deep breaths and plotting out the best way to approach the scenario with just a bag of stealthy tricks at my hip, I tend to take out the first few enemies I can and then attempt to run out, swords/staffs/axes/giant hammers blazing to take care of the rest. Apparently, I need my stealth to involve a lot of 15th century Roman buildings and a hidden blade. I can say that I made it to The Furnace (Chapter 12) before I stopped and said enough. But being a completionist at heart, I lamented and Matt took over for several of the more difficult mech-infested areas. In the end, I saw the cut scene epilogue and the credit roll, but in my heart I know that the credit belongs to my loving fiancee, because I would probably have stopped playing soon after The Furnace. I like my games fun, and challenges are a-okay, but when I spend several hours stuck on something that YouTube claimed took a player 7.36 minutes to accomplish, I know I am in unrealistic territory. If the occasion ever rises again, I think I will gleefully stick with Monkey and Trip, bashing my way through Post-Apocolyptica.

Email ThisBlogThis!Share to TwitterShare to FacebookShare to Pinterest
Labels: Enslaved