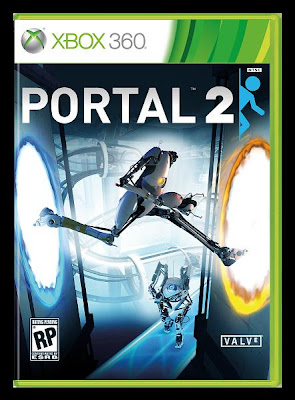 Valve sending out a press release including the cover art for Portal 2 is a pretty good sign that it will actually be in stores in April. I am really, really excited for this one. Interactive co-op modes that are playable in the same room, on the same television, are few and far between unless you count all of the puzzle and 2-D shooters available on XBLA, so this is a game that Matt and I are looking forward to playing as a team. When we were at PAX, the gentleman presenting the demo said that they were excited to learn that people were playing the original Portal together. While progressing through a puzzle, if it became too complicated for the person in control they would often ask the advice of another or pass the controller over to a friend or partner eager to take a stab at it. From that feedback they created a full cooperative two-player experience alongside the new single player story. I know that I will play both, even if during the single player experience I still end up passing the controller to Matt to figure out some of the timed puzzles. My main problem is quickness of movement. I can usually parse together the structure of how I am supposed to solve a room, but often have problems when it involves pushing a switch, running to platform and leaping across an abyss to slide through a doorway before the switch disengages. I would blame my old age, but since my fiancee is a few years older than me and has no such problems...

And speaking of puzzle games, we also downloaded Halfbrick's Raskulls last week and both caught what I like to call 'Video Game Tourette's (VGT) from playing it. (No offense intended to people who actually suffer from this debilitating disorder.) Raskulls has a variety of puzzle formats in it using adorable little costumed skull-faced characters and cutesy humor usually involving hitting someone with a half brick. I really like a few of the puzzle formats, such as racing and one that requires you keep a certain number of 'zaps' in order to successively break a top to bottom room full of multi-colored blocks in the correct order. But the crazy difference in pacing between the puzzles can be calming or rage inducing, depending on whether you are moving from one where speed is a determinant to one where deliberate choices are the objective. And the VGT enters in full force when you continue to play the same puzzle a hundred different times without success. My favorite little Raskull is the pirate, shown in PAX pin-form above, who is available in the multiplayer format and dances to a little sea shanty when you choose him. I didn't get a chance to test it out during the convention and have only made it to Chapter Two in the game because I hate migraines and continue to love my couch and living room windows, but I am sure it will be a great party game. Raskulls is now available on XBLA. 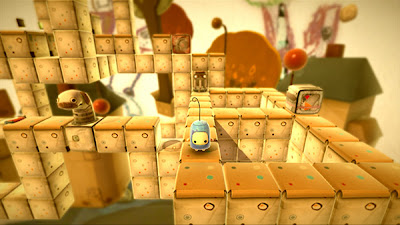 Playing SouthEnd's ilomilo is as peaceful as Raskulls is excitable. The graphics are gorgeous and the puzzles fairly simple. The two lead characters, ilo and milo, meet together in the park every day for tea, but often forget the way to their favorite meet up spots and need some help reuniting. The picture book story compliments the visuals, the controls are tidy and the environment welcoming. The puzzles themselves consist of connected blocks, floating in the air, with ilo stuck on one side and milo on another. The player must reunite them using the blocks in a particular way according to the nature of the dilemma, switching back and forth between the two in order to accomplish the task. For example, there is a special block that the player must pick up to fill a gap in the pathway, allowing either ilo or milo to complete the trail and greet each other once again. Gravity can be manipulated using a block with a little red carpet draped across one side, and another contains a trap door to carry you to the underside of the block formation to explore every angle of the structure. I am so in love with ilomilo. The colorful graphics and 3-D environment flow together extremely well and there is even a collectible element to engage the player more firmly into the story arch. ilomilo is now available for download via XBLA.