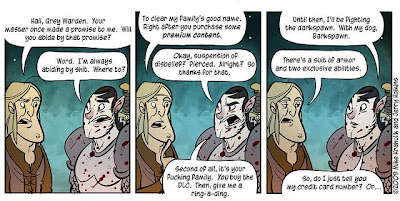 Last weekend I took advantage of the sale on EA Add-ons on Xbox Live and finally played the last of the seemingly unending Dragon Age DLC, Golems of Amgarrak and Witch Hunt. Both were fun, albeit short, new chapters in the story, including one with Morrigan that resolved...some...of her issues (nothing can erase her complacency about that demon baby situation). I liked Witch Hunt in particular, because it took my heroine and her gang to familiar places-the Circle of Magi, Korcari Wilds & the Deep Roads-and involved intrigue, magical relics and intricate library usage. When I play WRPGs, I normally prefer to be the knight character because melee is my primary combat choice. For Dragon Age I chose to be a human mage, deviating away from my tendency to prefer long swords, battle axes and giant hammers to get the job done (keep your Freudian opinions to yourself). During initial setup, I decided to challenge myself with a different skill set that paid out in the end-I adored my staff wielding heroine and the interactions with the Magi. Plus the outfits were far more stylish.

The Golems of Amgarrak warned at time of purchase that it was ‘extremely challenging’, but it wasn’t. Your objective is to uncover what happened to a missing group of dwarven explorers attempting to locate some previously lost secrets about golem construction. The challenging piece, I imagine, was supposed to be during some fight sequences against groups of pretty epic stone protectors, but sheer persistence got me through them without perishing (although everyone else in my party did-total wusses, obviously). In one area several colored lyrium switches scattered throughout changed the overall room/item accesibility based on what shade happened to be enabled at the time. The blueberry hued switch seemed to take everyone into another dimension (of sorts), but none of the other colors did this as they were primarily used to guard doors and chests in force-field like wrappers. The final room forced you to play SIMON with colored switches in order to progress and I thought to myself, ‘Aha, here is the difficult piece!’, but then I recalled that Dragon Age gives you the answers to the puzzling bits if you were diligent about collecting all of the codexes and quickly found the answer in a note. So alas, no challenges to be found. But the story was pleasing, the whole lyrium aspect interesting and different, PLUS you gain a party member that is a giant rhinoceros named Snug wielding a deadly horn, so I would say it was worth buying at the sale price. 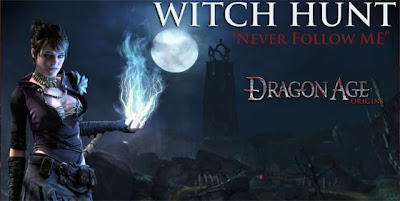 I found Witch Hunt to be much more engaging because chasing after a devious character like Morrigan is delightful. I like quests that involve the Circle Tower and the Magi because they hold more mystical appeal than the requests to clear out darkspawn from underground lairs. Beyond finding Morrigan and the Elvin Book she has stolen, there is some delicious library puzzling and tears in the Veil to mend. And if you have been dying to have one more conversation with our Witch of the Wilds, well, she is more than willing to chat with you. Since I generally defaulted to more virtuous choices in the game, Morrigan and I were always butting heads, so when she took off right before the big boss battle with the Archdemon I was surprised, but not overly so. Logically, her reasons for ditching us were sound-I don’t think I ever did her any favors and denied all of her requests during the main quest in order to keep my moral compass on the right side. I intended to use my second playthrough to sneak into her isolated and slightly wicked sleeping bag, but...there is just not enough time in the day for another 60 hour game (I finally counted) if I want to keep writing about anything other than Dragon Age. If you only have a couple of bucks and need to choose between them, I would say that Witch Hunt is the better investment.

Although playing Dragon Age showcased my ongoing ideal to be a better virtual person, I am truly regretful that I didn’t get to know Morrigan better because she seemed like a fascinating character. I stayed almost exclusively on the straight and morally narrow path-my one misstep in the land of virtue was consorting with Zevron when my heart belonged to Alistair, which was a choice that plagued me until long after the game was over because it was so unlike me, as a real person. I have a really hard time being the nasty, vengeance wielding, puppy kicking character. If requested, I am the person who will spend several game hours fetching things in order to win the favor of the villagers for little reward. Because of this I always feel like I am missing out on essential plot devices or relationship possibilities-like getting to know Morrigan in a more intimate and scandalous way, so I faithfully start new characters and give them selfish, steely-eyed personality traits but then abandon them when intent becomes actuality my evil choices make me feel a little queasy. Maybe it’s because I love kittens so much, but it’s just really hard for me to be the bad guy. Maybe one day if I have enough time to devote to another mega-time eating game I will slide into the dark, demon baby riddled, side, but for now I think I will look forward to Dragon Age II hoping that I still get to be the hero of Ferelden.

Golems was likely easier for you because you're playing a mage, actually. If you were playing a warrior or a rogue, your only mage-like character in that chapter would be the golem you find to join the party, and it doesn't even begin to live up to a player-character mage. With Elissa, I barely beat the Harvester even on Normal difficulty, and can't get near him on Hard to get the trophy.

That makes sense. As a level 32 mage, it's much easier to stay further away from them and keep blasting/healing as they throw rocks or charge. Being closer often gets you stunned.

I didn't have any trouble with the Harvester, but then again, I was able to stay pretty far back. Is Elissa a rogue?