I spent a great deal of time over the holidays completely gameless. I had nothing new in the hopper and we had a fairly full calendar of activities, so it wasn't a huge deal that Gamefly also decided to abandon me for a week and not send anything new my way. But I also knew that whatever they eventually sent would probably be the dregs. And, well, finally I got an email informing me that they were sending Arcania: Gothic 4, something I added to my queue awhile ago as filler. I've had some luck with the unheard of before, filler-like games, such as Sherlock Holmes vs. Jack the Ripper and Deathsmiles, so I'm not averse to adding them for variety amongst the bigger, less risky titles. With Arcania, I assumed I would pop it into the 360, play the first chapter, hate it and send it back. But I didn't. I played the first few quests in the action RPG and...didn't stop. Five days and seventeen game hours later, I finished it. Not because it was a good game by any means-because it wasn't, but because sometimes the quest-filled, hack and slash environments are like pulling weeds in a garden. You know just what you are going to get when you step inside and accept it for what it is, warts and all. And there is some lazy comfort in this kind of experience.

Since I am not a PC gamer I have never played anything in Gothic series before this one, so I had little to no expectations from it other than it be something playable, and because the game is a port to the 360, the chances that the controls will be unbearable is fairly high. But luckily, everything in that department seemed to work adequately from the start. Double lucky that I prefer to be a melee/hand to hand kind of girl as opposed to an archer or a mage, because the controls for those commands were cumbersome during combat. You start off in a village in Anywhere, Medieval Time, where the unnamed protagonist is trying to win the blessing of his intended's father by performing a series of errands. Let me stop here. In third person environments there is nothing worse than leaving the main character nameless. I can understand it in first person, because the intention is to leave the lines blurry enough to make the player feel as though he/she is the hero of the realm, but I know I am not a scruffy bearded 30-something white male with a giant chip on his shoulder, so leaving him as 'character you are guiding' left little to invest in and created a dissonance between he and I. I mean, this guy is a top notch jerk-whoever did the voice acting for him forgot that tone conveys more than words and when asking NPC's gentle leading questions such as "Why are you here?" he sounded more disgusted than conversational. Already the disconnect is clear, even from the beginning. And as the story goes on, sending our hero to avenge his burning village through a series of quest and repeat missions to a final battle, it never improved beyond mediocre. It just...was. Okay, so why would I keep going then? What would prompt me to continue?

Just like the example I used earlier, sometimes gaming can serve the same kind of purpose as pulling weeds in a garden. There are those that hate the repetitious and often arduous task of gardening, and those people would stop before the first hour of this one, but there are also those that see a place where the motions of clearing out each square of land can have its rewards, and can be a sort of blissful experience overall. Playing Arcania was kind of like that-nothing surprised me, nothing challenged me. There were some areas where the game was difficult, like pulling a particularly ornery plant out of the ground would be-slightly annoying and disruptive in the pacing of the task at hand. But once the area was clear, the quest and repeat tick-tick-tick of the metronome-like narrative would continue and a new place to clear would become visible. I think we all have games like this in our collection. Ones we play not because they are fantastic representations of the media itself, but because there a sort of comfort about them. I always know I am knee deep in one of these experiences when I am asked what I like about the game and I can't quite pinpoint any reason but keep playing anyway. Or, more often, I have a whole lot negative things to say about the game (re: paragraph two), but continue without being too concerned about them. Maybe this is because I am guilty of being the proverbial list maker, loving the strikethrough after each task is complete. In those situations where nothing bars my way from continuing this figurative list, I feel compelled to move forward almost mindlessly. And this doesn't sound terribly healthy-compulsive gaming sounds a little scary conceptually, but I don't think I am in any danger of addiction when it comes to these quest and repeat games since I just vowed never to play a Sims game again, recognizing just how ridiculous performing tasks without much reward can be. To keep with the metaphor of gardening, playing the Sims is like being the Sisyphus of weeds-no matter how many you pull they keep coming back to maddening degree. After playing a comfort game like Arcania, you can take the gloves off and turn around to see your accomplishments in a cleared out space of land, even if the act of pulling weeds wasn't terribly captivating or memorable. 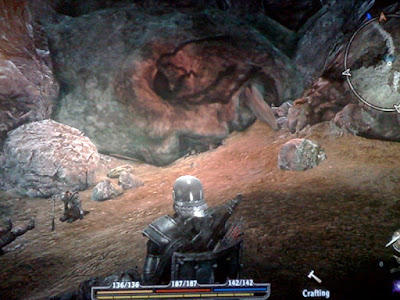 Back to Arcania. I would never recommend this game unless you find yourself like me, sick on a couch with no other discs/cartridges on hand for an entire weekend. If I wanted to have the same kind of experience, but one that is challenging and rich with emotional and cognitive rewards, I would replay Dragon Age. At least then I could be admiring the richness of the story, the depth of the character interaction and the lovely tonality of the voice actors while still carrying out a quest and repeat process. The fourth installment in the Gothic series had none of these attractive elements, leaving it shambling in the dust chasing after trolls and undead skeletons while its unnamed hero growls to keep going.