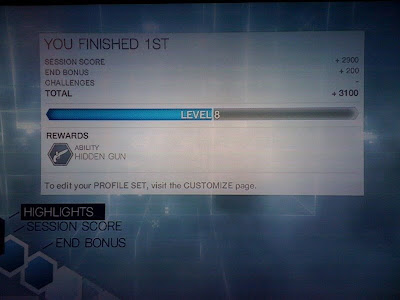 After months and months of writing concerning my apprehension about Assassin’s Creed: Brotherhood multiplayer and the effects it would have on the story mode, I am here to confess that I have converted-but with some reservations. Besides the few games of Scene It? I played online with poor sports who would drop out after it became clear I was about to cream them into bits, I have generally avoided the entire online scene. And not for the normal ‘girl gamer’ reasons such as poor male behavior or aggression-I rarely put a headset on, so I leave that whole experience out of my online interactions. I usually don’t even stick around for long, finding that by the time I enter the arena everyone around me has already been playing a particular game for ages and the environment is no longer very conducive for new players without feeling either a sense of urgent competitiveness (I need to be better than all of them!) or a serious soul crushing (why bother continuing?). But I am finding the world of Brotherhood multiplayer to be generally accepting and the playing grounds fairly even-handed and inviting for people who are usually not community gamers. I know that after a handful of rounds in Wanted Mode and a couple of matches in Manhunt Mode playing alongside some fellow PAXers I have found joy in the multiplayer realm for the first time. And it’s quite fitting and probably not a coincidence that I am finding it within my favorite franchise.

One of the biggest reasons I have stayed away from playing online is that in general, I am not very good at quick maneuvering in video games. I tend to be a little slow and deliberate and this characteristic doesn’t usually lead to great competitive game playing. But that’s kind of the best thing about Assassin’s Creed-all of the skills you learned while playing Altair’s and Ezio’s stories become an incredible asset in multiplayer (I imagine this is true about most games). And since I have been a staunch devotee of the series for so long, I have learned some mad stealth skills along the way, such as the ability to be slow and deliberate on purpose. Instead of making quick decisions and reacting accordingly, a huge piece of being successful in Wanted mode is to completely blend in with the surroundings. Part of being totally in love with a game means learning how to use the controls gracefully and effectively in order to achieve your objectives. And although this didn’t help me much in the Bioshock multi, I am being rewarded generously in Brotherhood. There certainly have been matches where I haven’t scored very well, but I also didn’t get assassinated by other players more than a couple of times, either. So whereas I am doing it half right, it’s also interesting that the half right part is learning to be completely invisible to my opponents because I am normally the clumsiest one in the field. And you know what? I’m pretty darn good at the other half as well-you know, the stabbing part.

So here I am once again eating my previous words about the multiplayer in Assassin’s Creed. Whereas before I was name calling and throwing rotten fruit at Ubisoft in the months leading up to its release, now not only am I drooling over the Story Mode in Brotherhood but also grinning stupidly at how much fun I am having tucked into Ranked Matches, repeatedly stabbing people in Wanted Mode. But I just wouldn’t be me if I didn’t start whining about something when it comes to Assassin’s Creed, right? You wouldn’t think I liked the series at all, let alone loved it more than peppermint ice cream and fireworks, but truly, I do. This game series has moved me more than most of my favorite book or movie choices-which is pretty huge in my world o’ media. Okay, so now my reservations…The newest DLC chapter, the Animus Project 1.0, released last week with some new multiplayer maps, and Animus 2.0 is set to release in January with more. Umm…what about the Story Mode DLC? Lots and lots of chatter about a new Assassin’s Creed project releasing in 2011, but that’s pretty soon for a fully fleshed out new environment and a new Assassino…is the Story Mode going to be stuck with Ezio forever? Well, the enigmatic ending of Brotherhood’s Story Mode pretty much leaves that out of the equation, considering a few of the past factors were relevant in the future resolutions. So can the team develop a new DNA sequence starring a new incarnation of Desmond in such a short time period and make it viable? Or will they pour the heftiest amount of love, time and attention into an extension of multiplayer because it has been so successful?

Oh, and the above, poorly lit screenshot is documented proof that I am awesome...Level 7 playing with a bunch of level 14-16 players and I still managed to be ranked 1st. And yes, I am bragging, but humbly, considering this has never happened to me before and is unlikely to happen again.