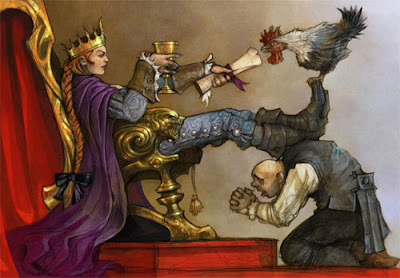 Now that I have officially completed Fable III, I find that I have so many bisecting thoughts about the experience that I am having a hard time writing about it. In some places there are definite improvements over the second (I haven't played the first Fable, so my comparisons are based solely on the sequel), in others sections nothing has changed, and in a few areas the game is significantly worse. Instead of trying to sum up various impressions I thought I would try to piece them out into different chapters to try to parse out exactly how I felt about the game, because right now everything is kind of a jumble. I’ll start with my first impressions and try to outline some semblance of an orderly experience from there.

My first few hours of the game were spent as player two in same screen cooperative, so in all fairness I was placing myself in the position of a backseat player-not necessary the best first impression of any game that is intended to be a single player experience. Both Matt & I are fans of the franchise and were eager to try out the same screen co-op version to determine whether we could venture through it together. Well, you could, but player two serves as merely a tagalong, so there are no interactions between player two and other characters unless initialized by P2. I wasn’t a big fan of being the tagalong, but it did give us a chance to see where the strengths and weaknesses of co-op were compared to the F2. In F2 you could be the support player but it was very generic. You weren’t playing with your actual character, even though you had access to your own bank account. And being the second player was a lagging, camera confused mess if you were on the same screen. So I was quite pleased at my first impressions of the ease of cooperative in F3. This time you did have your own character at your disposal, and could even visit your own “Sanctuary” (the new interactive menu system) to modify your outfit or weaponry at any time. Entering into partnerships yielded both players the ability to earn money from real estate and jobs, and Matt & I instantly discovered that our characters could marry and have babies in each other’s games as well. The overlaps are really well done-in my game we are married and have a home, and in his game we are married and have another home, but both count in both games. So for example, if I am married three times, two are in my own game and one is in his. I found this new cooperative aspect a LOT of fun, even if the same screen element still trudged a bit-not the games fault, really, more just a specific minded player fail. The two players can’t move too far apart from one another without stalling out one character, so you have to stick together. And since player one is driving the quests, player two ideally should stay nearby and try to be as helpful as possible, which was hard for me and my controlling, first time playing mind since I was dying to peek under every bush and in every corner. I later played online cooperative with a friend of mine and although the connection lag was cumbersome (epic load times), the two player interaction was much better since you could move fairly far apart without much restriction.

Realizing that I wanted to be more in control, and being an incredibly supportive and generous fiancée, Matt graciously agreed to switch places. Being player one allowed me to start exploring Albion as I do-thoroughly. Since the narrative is set several generations ahead of when we last saved the land (jeez, Albion, get some kingdom insurance already), the landscape should have changed...except it hadn’t. It wasn't until we got to Bowerstone and saw the effects of the Industrial Revolution that I noticed any significant environmental changes. Although there was a certain crispness of the trees and grass that was lacking in F2, the two games could have been set one on top of the other. Even the overworld music was the same. On one hand, this is a good thing, as familiar environments serve the same purpose as pulling out the fuzzy and familiar winter blanket you packed away for the summer. But I guess I wanted to be wowed with this new environment and just wasn’t. It seemed almost lazy. I wanted a completely new experience, not a semi-reiteration of a past one. Maybe add a techno beat to the music or something (O_o!). This was probably the biggest contributing factor to my lack of investment in the first few hours of my own game-the familiar. I wasn’t learning anything new; I was merely continuing the same motions as the hero in my second game. I was running along a sparkling trail, I was conversing, I was expressing, my dog was demanding a digging. And the one new thing I was eagerly anticipating from the pre-release screenshots and videos didn’t happen until the end of the game (I will leave the spoiler out here). Although I adored F2 I didn’t realize I was venturing into F2.5 and was a little disenchanted. And although this feeling faded after about five or six hours, I definitely headed into the game with more of a shrug than a hug.

The narrative started with a kick-I liked the 'tyrant brother king that needs to be overthrown' theme. Logan was a delightful villain who you can either choose to off or save based on what kind of moral standing you would like to achieve. His little pointed chin and arching eyebrows effectively painted him as the typical evil dude. Apparently his heavy handed and greedy rule has affected everyone in Albion, and he needed to be ousted…except in the second town you encounter everyone seems to be getting along just fine. This is one of those elements of some RPGs that makes me shake my head-the inconsistencies between the main narrative and the NPCs. If Logan were such a wicked ruler, then why are most of the kingdom's citizens living in apparent comfort and/or luxury? Brightwall was full of flush faced, glowing carbon copy villagers with lovely homes and a bubbling fountain right from the beginning. I could understand the opulence of Millfields still remaining vibrant through Logan’s rule-the wealthy tend to donate heavily to keep their way of life, but the standard villager should have been struggling under the weight of tyranny, not milling about in their brightly colored clothing muttering about overthrowing Logan. I would have liked to have seen more environmental evidence of how bad it was to live under the reign of King Logan, where the villagers are paupers and their houses are falling apart in the beginning and depending upon your ethical choices change or don’t change over time. Maybe I am being idealistic here, but a visual representation of the state of the nation would have driven home the urgency of the mission right from the beginning.

On a more positive note, I really loved the Road to Rule as it slowed the player options down significantly. Although opening up the entire world map and all of the game devices in one swoop can be more fun for the player, I think pacing is meaningful and shouldn’t be taken for granted. In the beginning you are allowed to purchase residential property but not shops or stalls, you have to earn enough “Guild Seals” to accomplish certain tasks. Your expressions are limited to the fun and friendly variety (or naughty and teasing, depending on which moral stance you take) and you have to earn GS to learn new ones. This system is much more logical than the system in F2 because it never gets confusing. I remember a lot of book repeats in F2 and wasn’t ever quite sure what I still needed versus what I already had in my equipment. Plus, ransacking bookshelves for hours was extremely tedious. The Road to Rule adds a systematic feeling of accomplishment as opposed to randomness.

All in all, it’s pretty obvious that my first impressions of Fable 3 weren’t terribly positive. If I sound super analytical or nitpicky, I will agree that I am being a little hard on the game. It’s never good to create lofty expectations of a game based solely on its predecessors, and I was probably gazing up at Fable 2 on its pedestal for far too long. Thankfully, it was probably right around hour seven or eight that I finally was able to invest. Not to the extent that I was drawn into F2, but I think that largely has to do with the fact that I felt like I was playing F2 and my investment was already secure. None of these impressions deterred me from continuing forward, however, I was still captivated enough to keep going…and going…and going…