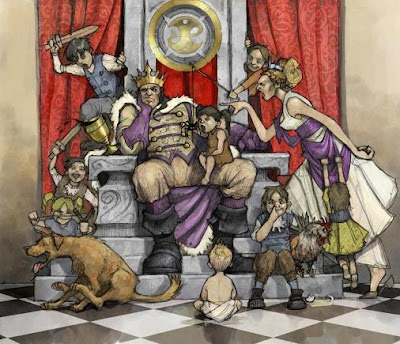 Whether I am playing out a predetermined narrative in a Final Fantasy game or building a rapport with a chosen character in Dragon Age, I find character relationships one of the most compelling aspects of RPGs. I would actually say that romancing Alistair in DA and all of the drama and intrigue that came along with it was one of the driving reasons that I continued playing. When I decided to flirt with the dark side and take Zevron as a secret lover I felt a little scummy. But investing in characters is something we do all of the time. Especially if we are jumping into a character that evolves based on player choices. Heavy Rain is a great example of intense emotional involvement since the player choices inflict visual wounds on the protagonist. I felt terrible when I flubbed a few QTE’s and Ethan bore the weight of my mistake. What is great about Fable’s network of character connectedness is how it turns these serious, consequence heavy relationships on their head, encouraging the player to live a sort of hedonistic and carefree lifestyle instead. Sure, there are consequences for the more banal choices you make, but nothing too serious. And instead of feeling guilt, you want to giggle and tell your co-players about it. How many STD’s did you get in your game? Me, 3-but in my defense I thought the blacksmith in Brightwall was kind of sexy with his walrus moustache and heavy black apron and had no idea he would be afflicted with some sort of pox.

One of Fable’s best elements is its open-world relationship abilities. You can nurture a relationship with almost everyone in Albion. In the beginning of the game all of the villagers feel “Neutral” about you, so if you want to take it to the next level (Friends), you have to perform a series of expressions for them. In F3 you have to work a little bit harder to prove your devotion than you did in F2 by going on “Courier” or “Fetch” missions to other zones for them. This was really entertaining at first because I thought it created an almost infinite element to the game. With all of the millions of people living in Albion (6.5 million to be exact), you could use this mechanic to play forever. After a few missions, however, it becomes obvious that the NPC’s are requesting you do the same things over and over again-even to the same place in the zone every time. For example, if a man in Brightwall requests you deliver a package to a woman in Mistpeak you will be couriering it to the same exact location as the last time you performed the task-to the lakeside near the Monorail Station. After about ten of these missions I stopped doing them altogether as it was extremely tedious. Occasionally, the game would completely lose track of someone and start sending you back and forth along a road into infinity until the person finally showed up on the map again. So unless I focused on one individual because I had something in mind for them (boy-toy) I usually ignored the Relationship Quests in my list.

If you did decide to perform the mundane task for a chosen someone you would then get bumped to “Friends” and they would request you take them on a date. This was really fun until all of my dates started getting eaten by balverines (as I wrote about in a previous blog). But for those who managed to survive the trek to another zone without letting go of my hand and running to their doom, a lovely scene would take place where he/she would declare their love and a marriage could take place. I did this exactly 13 times. What can I say, I love presents. And unlike the situation in Dragon Age, I didn’t feel guilty for taking so many vows. Fable is different because it never really invests in your in-game lovers. They remain NPC’s even after the ceremony, merely residing in a house of your choosing and occasionally requesting some ‘alone time’ (re: sex) while showering you with gifts. So why not collect them? One in every town. The game even keeps a count for you in the loading screen, comparing you with your real world friends as though you are competing for total spouses. I have no idea whether a higher or lower number is ideal; I just know that seeing the numbers was entertaining. I always made sure they were in different towns, however. This is important in F3 more than it ever was in F2. In F2 I married the blacksmith in Bowerstone, and then when I transitioned from female to male I married the furniture store owner. When I encountered both of them while passing through the village they would bicker about me in the streets and leave it at that. What happened in F3 was quite different, however, and I was both stunned and delighted by the depth of understanding the game had about my character's relationships.

The first thing Matt & I did in my game was marry and have a baby, Celia. When I started playing solo, however, I decided to marry again in the Drifter Camp to the Tattooist, Sarn. We had a baby named Dean. Everything was fine until Matt jumped back into my game and we ended up in the Drifter Camp. Just to razz me, Matt used his character to threaten and humiliate my ‘other’ husband and we giggled about it. Apparently, Sarn wasn’t laughing. After he demanded an explanation and his relationship level went straight from Love to Hate, the game informed me that Sarn had divorced me, sent Dean to the orphanage, sold our love wagon and left town forever. I was so surprised and stricken by the idea that my Drifter child was now in an orphanage somewhere that Matt actually apologized to me. Since I hadn’t really explored Bowerstone Industrial, I had no idea where the orphanage was located and ran to the internet to find out. Luckily, it was an easy fix and my child was restored to me after a quick adoption-Matt even offered to let little Dean live with Celia in our house in Brightwall. This experience was MUCH different than the one in F2 and I was quite impressed.

All in all, even if the relationships in Fable are not quite as serious as those in other games the emotional investment remains the same. By marrying a whole slew of gentlemen and having 20 children (mix of biological and adopted), I felt more like I was creating a distinctly unique experience. In my game I had a variety of relationships that led to an army of children following me around Brightwall demanding toys and a late husband in Millfields-what about you? How did your relationship choices affect the ambiance of each town? Did you play online? How did you identify with other players? I know that having my real world fiancée as an in-game husband was delightful. I felt bad when my Drifter Camp husband left town and orphaned our child but it gave me a new and completely unexpected goal outside of the main quest. I married a mercenary in the camp specifically to kill him later for an achievement. In this, Fable’s ability to construct a variety of relationships in order to tailor it specifically for the player is a completely successful aspect of the game.

In retrospect, maybe riding Sarn like he was a rodeo bull and swinging my hat around in the air was going a bit too far.