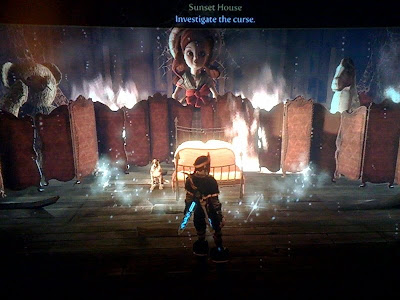 In my first diary installment I talked a lot about how disenchanted I was about Fable 3 during the first few hours of play. But I also hinted that several hours in I overcame these disappointments and started to have a lot of fun. So instead of continuing to give you the impression that I am a big bummer, I will tell you about how enjoyable my thirty-five hour traipse through Albion became after the game shook off its predecessor and became its own.

Instead of having a menu system, F3 has “The Sanctuary”, a giant closet where your entire inventory is held. Pretty brilliant, actually, as it solves the age old question of where the hell your character puts all of the unused stuff in their inventory without being thwarted by the laws of physics. I loved The Sanctuary for its convenience-you could try on clothes to see how they look, twirl around, dye them and then ultimately restore them when you decide they look like crap, going back to the corset and black striped tights you saved from playing a mercenary in Brightwall. The only dumb factor of The Sanctuary is that the “shop” is located behind door number four and the in house butler is always reminding you of the new items you should buy-we’re talking DLC here, people, not in game shops. The best part about The Sanctuary, however, is the map. Located in the center of the main room, a big magnifying glass peers over a topographical table map and allows you to see your Quest List, fast travel to any location and purchase and repair real estate by zooming in on each zone. What a relief! Once you get the hang of the map mechanics, moving around and locating current quests is a breeze.

The variety of quests available also kept the game interesting and allowed you to pace it according to your whims. I had a system going that allowed me to finish almost everything prior to the final boss fight (which I actually wouldn’t recommend, but I didn’t know any better at the time). After getting out of Brightwall and starting the methodical scour of every zone now available, I would do a main story quest, complete whatever missions that came along with it and then roam the countryside looking for additional errands to run and try to pick up as many of the collectibles in the trips around each zone. With the exception of the Relationship Quests, I found all of the additional errand missions added depth to the story tenfold. For example, there is a request for a donation in Millfields to build a bridge to Driftwood. The gentleman requests you ‘come back later’ (either let time pass naturally or go to sleep to push time forward) to see the finished project. After awhile you will find a bridge to an island paradise called Driftwood, where after a series of additional missions you are rewarded by seeing your contributions turn a paltry beachside caravan party into a brightly lit archipelago full of grateful people. Without the simple hand off of a few bucks to the original quest handler Driftwood wouldn’t have existed. And this isn’t in the main quest, either, just added fun for those willing to be thorough. These were the best kind of quests because you never knew what to expect.

Exploration is incredibly rewarding as well. Because of sheer determination and an unwillingness to let any stone go unturned I found the Sunset House, a creepy ghost mansion that is transparent at night and in shambles during the day. A gazebo full of ghostly statues lurks nearby, begging you to uncover the secret. Most of Mourningwood was ripe for investigation, considering my undying love for the spooky and ghostly setting. And F3 is just as bursting with collectibles as F2. Instead of gargoyles taunting you from archways and eaves, F3 now has gnomes (who have been possessed by an errant gargoyle from F2, just to tie it all together) who bad mouth you along the way. Near the end of the game I had 49/50 of these little monsters and couldn’t locate the final one for a really long time-what a delight it was to shoot the little bugger in his smug face after finally discovering the third entrance to Chillbreath Caverns in Mistpeak Valley. After an exhaustive search (and a little help from the internet) I found all of the silver and gold keys, all of the flowers and all of the books for the Academy. My final action was accepting a silver key in the Shifting Sands. I know that most people might think this is one of the more monotonous aspects of the game, but I am just OCD enough to love finding all of the collectible items. It definitely adds to my completionist sense of accomplishment.

It was about the time the story changed gears that I really started to love Fable 3. The narrative was broken into two different parts-starting a revolution and then ruling a nation. Starting the revolution was the basic introduction to the game, giving the player the kind of missions that aid in generally orienting themselves with the environment. Becoming the monarch opens everything up to player decision-will you be a benevolent ruler? Oops, you may end up killing everyone. Will you be a tyrant? Dang, everyone hates you, why did you even overthrow the last king? It’s a pretty awesome struggle to keep a kingdom in balance, and I loved the thought process behind each decision. I played most of my game during the revolution, not wanting to count on the second chapter being as time forgiving as the first, but I really wish I would have completed the bulk of the additional quests during my reign of Albion. Plus my crown looked fantastic, jauntily perched on my head, matching the corset and striped tights from Brightwall.