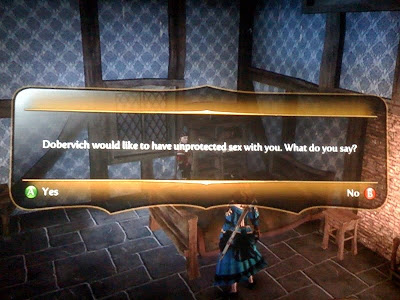 Explaning my absurd difficulty in securing lasting relationships in Fable 3 to Matt (GT: Dobervich) made me laugh. I thought I would share:

Me: I am trying to acquire an achievement for getting married six times and killing two of your spouses (Henry VIII) in Fable III, but it's more difficult than it sounds. Right now almost ALL of the more rural areas have been taken over by balverines. So when I ‘court’ someone they almost always ask to go on dates by scenic areas, such as the lake or the mountains, where he or she gets eaten by balverines. I try to fight them off, but those werewolves are quick! In Millfields I married this ridiculous fop of a dude and after the wedding grabbed his hand to run around the lake to our new family home, but balverines were RIGHT IN THE CITY and ate him. The only way around this is to marry in Bowerstone so the dates always end up in one of the market or old quarters, which are generally safe from beasts, but if my various spouses get wind of one another they divorce me, leave town and orphan our children. Once I took a lady on date near the city and bandits shot her.

Matt: Thank you for making me feel like I'm not missing anything-except getting my dates eaten. Strangely, that sounds funny.

Me: The first time it happened with a saucy lady from Bowerstone Industrial, I was shocked. I had invested two 'relationship' courier missions into her and we were heading for the garden near Millfields on our first date and then BAM, she was dead. I even courted the blacksmith in Silverpines, because that’s how I roll, but when I let go of his hand to kill the balverines on the path ahead he took it upon himself to RUN towards them and die. Apparently, our love was toxic and he considered suicide his only option. The blacksmith in Brightwall knew his place-he stood still while I hacked at balverines and didn’t get eaten TWICE, so I rewarded him with a lovely house in Brightwall (on the other side of town from my other family homes filled with adopted children) and now he takes care of our infant son, Dean.