With the release of the Game of the Year edition on the horizon, Gearbox has released what appears to be the grand finale of the Borderlands DLC, Claptrap’s New Robot Revolution, or as I like to call it, Viva la Robolucion! The last fight saw our heroes battling high level lancers in the Crimson Armory, an enormous bit of content with a highway laden landscape and huge returns as the level cap increased to 61 and the armory itself contained enough loot to arm the entire planet. This time around we have been caught in the middle of a fight between the illustrious Hyperion Corporation and a much more sinister foe-our little robot buddies. Led by the Interplanetary Ninja Assassin Claptrap (INAC), the claptraps are tired as hell of being subjugated under the boots of oppression and are rising up to rule Pandora the best way they know how-using technology. The Hyperion Corporation needs our reluctant assistance in putting this revolution down, offering our heroes rich rewards in exchange for their service.

As with most of the Borderlands DLC, CNRR gives the player several new zones to explore. The main hub is Tartarus Station, an area comprised of a railroad line and few inhabitants. A lonely NPC mans a bar near the Mission Board in town, listening to Moxxi's theme music on repeat, but other than a few strands of twinkling green lights and some roughed up Vegas style signs the town is largely unoccupied. The real missions lie just beyond the transit line-a cave system, a dump, an expanse of desert and a crossing full of archways and Claptrap paraphernalia. I really missed my car from the Crimson Armory. Even though the areas are fairly small in size, running back and forth to Tartarus Station to pick up and turn in missions ate up a lot of time. And without the ability to pick up several missions at a time there was a whole ton of jogging. With a second person this works out fairly well-one of you runs, the other loots. Whoever gets to the zone change station first clicks us out. All in all, I think I liked the Wayward Pass zone best of all-full of battle arenas and robotic manipulation, most of the classic Borderlands humor was its best on your journey to the end. 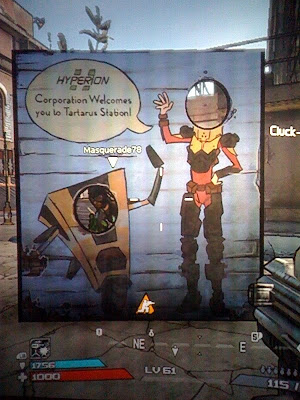 One thing Borderlands does well is NPC evolution. In the original game we saw such villains as anarchist bandits, lunatics and brutes. Occasionally one would show up with glowing eyes and the tag “Badass” added to his name, but they were still the same central stock of a dozen or so NPCs. With each DLC comes the usual suspects of baddies, but they always come with a twist. In CNRR our bandits and lunatics are 'traps' and have been converted to half human-half robot monstrosities with glass beakers on their heads and skin glowing blue with digital network lines. Instead of yelling in grunts and growls, we hear the high pitched timbre of the claptrap coming out of their mouths-very disconcerting after hours upon hours of being conditioned to protect anything we hear using this voice. A few previous bosses have been resurrected and reassembled by the INAC, allowing you to pulverize a select few again, this time with slight cosmetic differences. And without giving too much away I will say that the final fight was amazing in its granduer (bring two friends), and gives the player a feeling that they have come full circle from the very start of this mad journey into Pandora.

The claptraps are the real stars of this show, however. The INAC certainly knows how to throw a revolution party. Motivational sayings such as ‘Is the claptrap not entitled to the oil on his brow?’ spew out of loudspeakers in every zone you traverse throughout the six or so hours of playtime. The robot troops are well prepared and show up to the party dressed in their finest mohawks, bullet sleeves and boxing gloves, taunting our heroes by calling them 'fleshies' and 'treasure hunters'. I know I should've been convinced of their unwavering determination, but really I just kept cooing at their adorableness. Fans of the missions in the Zombie Island of Dr. Ned will really enjoy the theme of this chapter, as it contains the same combination of irreverent humor and item collection. And in true Borderlands spirit, please exchange any previously mentioned 'rich rewards' above with EPIC LOOT. For anyone who is familiar with the mechanics of Pandora, you will immediately know that this shooter-cum-RPG taps into the side of our brains that craves the unknown-convincing us that if we just open one more chest, the perfect gun or mod will surely be inside. The Crimson Armory was a salivating monster of loot generosity and CNRR is no exception. My Hunter and my fiancee's Soldier stepped in at the current maximum, Level 61, so it's become fairly difficult for us to find something more powerful than what we have equipped-but the possibility is always there. So we continue to compulsively open every green latched chest and locker, picking up every weapon worth over a million dollars in hopes of finding the holy of holies of weaponry. For those who never finished the Crimson Armory, I can almost guarantee there is something waiting for you inside Tartarus Station. And it just might be in the form of a Claptrap Bobblehead or a pair of pink panties.

This post was originally written for The Modern Day Pirates, who were gracious enough to give me a review code for the content.