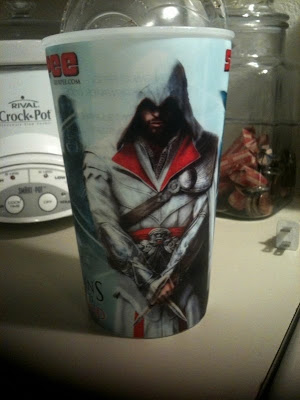 I love Assassin’s Creed. I’ve written several blogs about my adoration of the series and how apprehensive I am about the intense campaign for the multiplayer aspect in Brotherhood. I played a few rounds in the beta and was bored after about an hour-it just wasn’t for me. I have a really hard time replaying the same map and mechanic over and over again unless its puzzle related and therefore what I consider a built-in Zen experience (Luxor brings me peace). But seeing the single player heavy achievement list made me optimistic about continuing Ezio’s story. I briefly considered buying it instead of renting it until I realized how little I actually know about the single player story-so much exposure has been given to the multiplayer that I’ve tuned out any articles that may have celebrated the SP experience. I am that girl-the one who likes a secret indie band until they become famous, exploited and end up on the side of toothpaste tubes. I say things like “they’ve changed, man, they used to be so good”. Overexposure to anything wears me down (except peppermint ice cream). I like things associated to my relevant interests to come to me in small, well developed doses after a lot of creative blood, sweat and tears have been shed. I hate the marketing machine that follows like a slobbering dog behind anything that gains popularity among the masses.

I hate advertising. The occasional movie or game preview is okay, but I despise aggressive marketing campaigns. I hate the little squares of blurbs that pull out my personal information on Facebook and try to cater to my exact needs (Cheap Seattle Weddings! Become a Video Game Tester!). It feels like stalking. I didn’t tell these companies I am getting married. I didn’t solicit them for information. But here they are, violating my screen space with their obnoxious yelling. I have taken to tagging every advertisement as “Offensive” in order to quell the tide of marketing, but alas, it’s a fruitless endeavor. It’s part of the agreement I made with Facebook just by signing up (although after today, my tentatively open arms to social gaming via companies like Zynga are now closed again). We don’t even subscribe to cable television because we agree it’s best to watch shows via DVD or Netflix streaming to avoid commercials. To sum up, I hate advertising. And I really hate cross promotions that have nothing to do with one another-aka, Assassin’s Creed on the side of a Slurpee cup. Am I supposed to believe that I will have a better gaming experience if I am chock full of processed sugar and my tongue is stained blue?

How do I reconcile my love for Assassin’s Creed with my hatred for the aggressive (and, yes, annoyingly inevitable) marketing campaign that has followed in its wake? Is completely tuning it out my only option? Can’t anything already beloved by fan$ just $peak for it$elf?

*Photo credit to my friend Trina, who sent me this because she knew it was relevant to my interests.
**Dollar signs added deliberately, because yes, logically, I get it. I just don't like it.

I would worry about there being a blade hidden in your slurpee.