I know a lot of us have movies or television specials we watch during a particular time of year to help spice up the season, but what about video games? With a lot of companies releasing new content geared towards Halloween for games that I don't play (TF2, Minecraft, RDR), I had to dig a little deeper to find one that I could delve into that would bring the spooky holiday and gaming together. And then I remembered something...a small but pretty significant sequence called The Big Prank in Bully: The Scholarship Edition.

Bully is one of my all time favorites. I am not usually too big on the sandbox genre, as I find the world of GTA and its newer carnations, such as Mafia or Godfather, a little monotonous. But Bully truly captured my heart. The juvenile wink at its adult predecessors was masterful. And the Halloween mission, The Big Prank, visualizes the awkward time as a teenager when you become a bit too old for trick-or-treating and turn to naughty but harmless pranks in order to celebrate the holiday. The mission is available fairly soon in the game so you don't have to play very long to activate it. And the rolling tips on the loading screens warn you that The Big Prank is coming up and that it's possible to sleep through it if the player isn't careful-and it's the only mission in the game that you can't repeat. 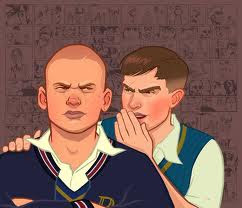 The Big Prank teams you up with Gary, another bully on the Bulworth campus. Whereas Jimmy's bully status comes from a refusal to become part of the hierarchy of underlings at school, Gary is a little more conniving and manipulative with his bullying. Jimmy is more muscle, where Gary is more brains. Even Jimmy falls prey to Gary's coercion tactics when Gary convinces him that on Halloween night they should play a wicked little trick on the gym teacher. The boys sneak out of their dorm room in costume (skeleton outfit acquired), rough up a prep, bag up some dog poo and head to Mr. Burton's house to leave him a surprise. Being a rebellious teenager has never looked so fun.

Whether it's killing zombie cowboys in RDR or trick-or-treating in Costume Quest, I wish everyone a spooktacular and safe holiday this year. Happy Halloween!