If I have one complaint about Double Fine’s newest XBLA release, Costume Quest, it’s that I can’t pack my bags and live there. It’s been awhile since I have been so utterly captivated by a game simply because of its very existence, but Costume Quest has met and exceeded my expectations tenfold. All right, now that I have uttered such an eyebrow raising statement, let me confess that Halloween is my favorite holiday. I spend a lot of time trying to figure out how to purchase decorations for my apartment that incorporate pumpkins, ghosts, bats and other Halloween related trimmings that can be kept up year round without looking too garish (making a note here: huge success). When I try to narrow down why I love it so much I start envisioning the thrill of being a child in the fall-playing in the piles of fallen leaves that have turned orange and red in the newly brisk autumn weather and returning back to school just in time to decorate the classroom with gauzy spiderwebs and orange construction paper jack-o-lanterns. Feeling the thrill of choosing the perfect costume and the anticipation of watching the Great Pumpkin and Garfield’s Halloween special on television while picturing visions of trick-or-treating and the giant haul of candy, candy, candy just on the horizon. There was always something delightfully spooky in the air when the sun started to go down just in time for dinner and the wind started whistling through the now bare trees as the weather changed. THIS is why as an adult I still love Halloween-I can still feel all of these emotions even though I am no longer in school, no longer trick-or-treating and no longer seeing the world through the innocence of a child. And THIS is why I loved playing Costume Quest so much. It brought all of the nostalgia of being a child into the world of my adult gamer self-the self that is willing to constantly suspend disbelief and immerse myself into these fantasy worlds so completely.

The basic structure of Costume Quest is part action adventure, part RPG. You can either play as the sister or brother in a set of siblings first introduced to you as the new kids in Acorn Falls, eager but apprehensive about trick-or-treating since they still have not made any friends. I played as Wren, the little sister who badgers Reynold, her little brother, about his embarrassingly hideous candy corn costume. The same costume that almost within minutes of venturing out gets poor Reynold kidnapped by candy-stealing monsters who mistake him for a giant piece of sweet. A candy-snatching plot is uncovered and your goal, as Wren, is to defeat the creepies to get both her brother and the town’s candy supply back. To help in combating the trolls and scary birds in her way, each costume you acquire (total of about 11) gives you the fighting ability of that particular role. When dressed as a robot, Wren transforms into a missle-loaded mech with basic and heavy movement, whereas being dressed in the vampire costume gives her the power to control bats and utilize ranged attacks. A couple of costume roles were healers and others guardians, so when the party size increased to three you could choose from a set of different fighting stances. The combat was turn-based, and a little repetitive, so having the variety of costumes to choose from helped alleviate the monotony. I was quite fond of the pumpkin costume because it turned into a Jack Skellington-like character with a jack-o-lantern head and his heavy attack was called “All Hallows Eve”. 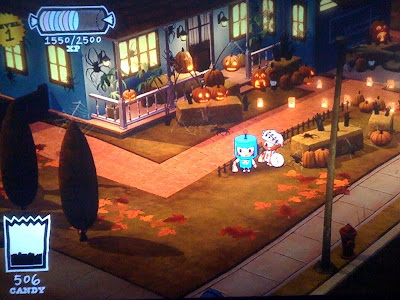 Stepping outside of the main quest, however, is where most of the fun resides. There are three different settings, a neighborhood, a mall, and a small spooky village with a carnival and a corn maze. Each of them contains a set of playful, childlike missions, such as trick-or-treat ten houses, bob for apples or find six children playing hide-and-seek. A large portion of the game is collecting; candy is everywhere and it was easy to get obsessive about picking it up out of mailboxes, trash cans, or glittering on the ground. Candy is currency to exchange for battle enhancements, but it’s also just really fun to gather (sadly, never to eat). As you progress your candy bag gets better until you finally have the ultimate bat shaped carrying apparatus that holds more candy than you could possibly consume. I admit I explored everywhere for orange and yellow jack-o-lanterns to smash (in my defense, they were full of candy) and green glowing caskets (treasure chests) to creak open. But this was more because when I sensed I was out of quests in a particular level and nudged to move forward I stubbornly resisted and kept exploring because I wasn’t ready to leave. Nope, not done here, game, there are more things to uncover in this delicious and irresistible setting. 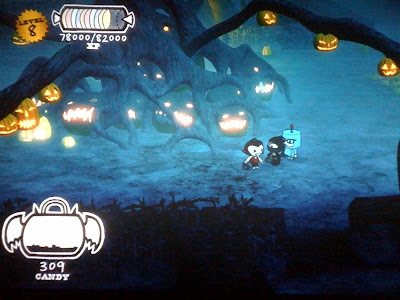 So here is where I am going to gush a little-I absolutely fell in love with the setting. From the moment little Wren walked out of her house and started strolling down the heavily decorated cul-de-sac filled neighborhood I was hooked. In the neighborhood setting every walkway was lined with glowing luminaries and spiders dangled from porch rails. In the mall the storefronts were laden with candlelit pumpkins. Trick-or-treating was truly that-either a costumed adult answered the door and lavished candy upon you or a monster camping out emerged for a surprise attack. Accompanying every knock were several seconds of sweet, heart racing anticipation-which would it be? The monster trick or the sweet treats? But if I could really pack my belongings and move anywhere it would definitely be the last area, Fall City, where a gas lit village and a spooky carnival have plenty of tricks and treats in store for our little heroes. If you loved Halloween as a child because of its delightfully spooky atmosphere and creepy decorations, you will surely love the world of Costume Quest. If you love Halloween as an adult because of the fond memories of being out with your friends in costume, imagining hidden monsters and eagerly anticipating candy, Costume Quest will help you get all of those feelings back for a few hours.

With about ten days until Halloween, I would encourage those curious or interested to pick up Costume Quest on XBL for $15 and play it prior to the holiday-the perfect ambiance and mood for an ideal playthrough is right now, in the season. Turn off the lights, light some candles, snuggle up on the couch and spend an evening with Wren and Reynold. You won’t be disappointed.