I'm Not Saying Awakenings is Buggy... 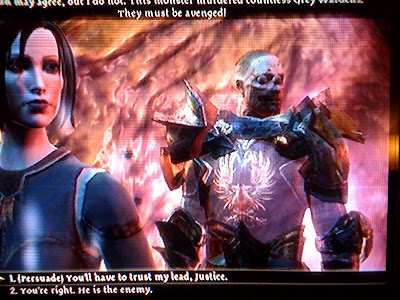 ...but I'm really not sure what is happening to Justice right now.

And so, with only two more of the downloadable chapters to play in Dragon Age, I can finally say with great certainty that this saga is about to end. I wanted to like Awakenings, the mega-long chapter following Origins and post-Blight, but without the great character interactions it was a hollow experience. Heading back to camp after a grueling and traumatic campaign was always a bonding experience for me and my Warden party in Origins. Vigil's Keep was hardly an adequate replacement for the intimate setting of the grassy knoll and the tents around the fire. It was where we chatted, we flirted, we shared ghost stories-it was one of the greatest narrative draws I had seen in a very long time in a video game. Without those elements the game depended largely on quest settings and combat to fill the relationship holes left behind. Plus, for such a relatively short chapter (probably 10-15 hours if you are thorough) it seemed quite strange to pick up an entirely new party with minimal backgrounds-you could hardly invest in them at all, let alone care about fulfilling all of their personal quests. I would much rather have gathered my old crew together to sort out this new darkspawn problem.

I did enjoy the quests in Awakenings, however. For one of them, you explore the Blackmarsh, an area where the veil has become thin and creatures from the Fade are starting to trickle out at an alarming rate. The area is spooky and the buildings are in shambles, with groups of werewolves skulking about at every turn. To complete the quest you have to find a woman known as the Baroness, which involves a slip into the Fade and the beginning of a mystery and a series of rather interesting choices concerning the darkspawn, the Mother and someone called the Architect. I adored the Architect. His appearance was straight out of a Guillermo del Toro movie or a Dave McKean illustration-gorgeous in a way you could only call 'bizarre'. The handful of actionable locations on the map contain intriguing secrets, complicated puzzles and novella-like stories. The final battle was incredibly easy-I didn't even think it was the actual end until the epilogue started to scroll by. Which meant I still had a couple of incomplete quests on my docket...which is pretty crazy-making for a completionist like myself.

I will probably play the last of the two DLC sometime this month and then put the game to rest for awhile. I still have a second playthrough in progress, but with fall hot on our heels it is fairly unlikely that it will get any attention for awhile. Dragon Age 2's release date is closer than it seems, and with the new screenshots of the female Hawk now out for our viewing pleasure, I am more than ready to tackle a new saga in the series.