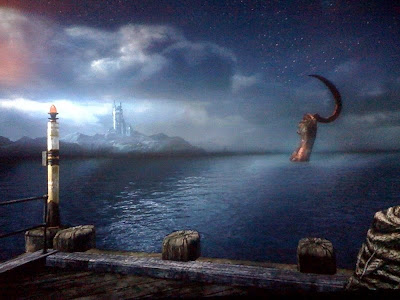 After a lot of procrastination and Plants vs Zombies favoritism (there is no way I could create an entire blog on the addictive qualities of PvZ, so I will just mention it casually in several posts instead) I was finally able to sit down and start a campaign in Singularity, a FPS with overwhelming Bioshock-like characteristics. I know a lot of people would scoff at a game that is so blatantly a clone of a hit franchise, but that notion is less important to me. I am more interested in whether it is a well made homage or if they just lumped the best aspects of Bioshock together and tossed them haphazardly into a different setting (post WWII USSR), hoping that the audience will latch onto the similarities and love them despite being so obvious about the parallels. Well, I must admit that it isn’t great. The first campaign enemies are straight out of Dead Space, with their log limbs and pouncing/ripping tendencies. You collect audio recordings left behind by the pre-radiation experimental doctors and authority figures, but unlike Bioshock where you can just continue on your merry way while it plays along with you, Singularity makes you stand there and listen to them-luckily they aren’t too long. A few film projectors give some back story via a children’s slide show montage… just like the plasmid explanations in Bioshock. The illustrations are fairly adorable-I liked a little cartoon Uncle Sam with fierce eyes and claw fingernails clutching an H-Bomb aimed straight at the heart of the USSR.

After a couple of hours with merely a myriad of firearms you finally get a mechanism that attaches to one hand that manipulates time and can be used as a weapon by shooting its beam straight at someone and stealing their years away. So yep, firearm on one hand, plas…time device on the other. The weapon upgrade stations are ridiculously hard to come by and can only be used if you find upgrade packs that look like blue glowing Xbox 360 consoles-I am a few hours in and I still haven’t been able to impact my armory one bit. And instead of having a locker on your back to choose from you can only carry one ‘special’ gun at a time (you always have your trusty pistol), which seems more realistic but is ridiculous considering that every situation calls for a variety of choices (um, this pistol? It won’t work as a sniper, thanks) and you’re never sure what is on the horizon.

I don’t want to give Singularity such a hard time, however, because I actually like playing it. There are bits that are really clunky and I have backed myself into a gamer corner by not bringing enough ammo for the room I am in (player fail), but I think I will keep on going. I like the creepy and abandoned setting, with its crumbling and Chernobyl-like remains, and I enjoy having two different kinds of weaponry in my shooters. My aim tends to stray towards the floor occasionally, so being able to blast sorcery from one hand is incredibly helpful. Plus watching building structures ravaged by time become whole again is neat. The screenshot I am showcasing above is from the introduction when the helicopter our protagonist was on took a nose dive in the water near the afflicted island. 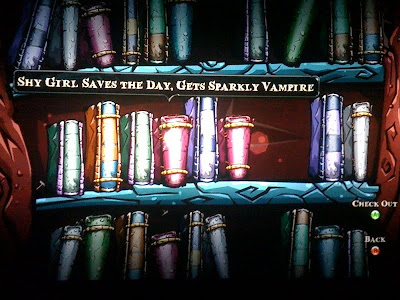 But I completely lost interest in all other games on Wednesday when Deathspank: Thongs of Virtue was released. I intend to write about this one in full, however, so I won’t say too much now. But I will say that finding this little tome in the library made me giggle.

*Screenshot Friday will now be a weekly theme. Sometimes I don't have enough time for full game blogs during the week because of work, life, houseplant obsessions, laziness, etc, so taking blurry iPhone pictures of my television should be a entertaining weekly project and allow me to talk exclusively about progress on games I haven't finished yet. I promise to try and find the most entertaining or disturbing ones I can. :)