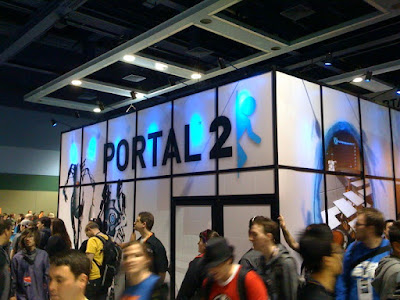 Walking into the Exposition Hall of PAXPrime was like stepping through the blue Portal in E3 and emerging from the orange into the biggest group of gamers and adoring fans alike. Although most of the games being demoed were no surprise to those paying attention to the media sources in the months leading up to the event, there was no lack of excitement for the first hands on attempts for games like Halo: Reach, Dragon Age 2, Dead Space 2, Epic Mickey, Rock Band 3 and my personal must sees Portal 2, Assassin's Creed: Brotherhood and Fable 3. Lines formed around Bioware and Valve's booths the entire weekend and would barely budge no matter the time of day. With the exception of Assassin's Creed: Brotherhood I chose not to wait in the long lines and instead enjoy a wide array of smaller and independent titles which I will talk about in my next blog (Part Two: The Little Sisters). But here are some highlights from the few games I was able to sneak into or watch demoed that everyone is looking forward this coming fall and winter. 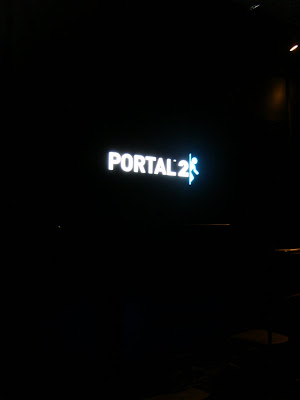 First let me say that I was a devout cheerleader for the Portal series prior to seeing the presentation and demonstration by Valve for the upcoming sequel. The only way they could have disappointed me is if they would have added space marines and/or assault rifles to the gameplay. Lucky for me, the elements they have added to Portal 2 seem to only make the game a more engaging and personal experience. The parts I saw during the promotional video showed an extensive and more trap happy lab, complete with new spiky walls to crush you and a gooey substance that either assists in bouncing or speed depending on the color. The turrets are still lined up to kill you but now you have lasers, blue light bridges and reflector cubes to assist in your success. The single player mode will be twice as long as the first game and when I asked a Valve rep about the puzzles he told me they would definitely be more intricate and satisfying to solve. But the aspect they were promoting the most heavily is the new co-op mode (they had me at split-screen). After extensive feedback, Valve realized that people weren't playing Portal by themselves, they were getting help from family members and friends, passing the controller back and forth and solving the puzzles together. In the co-op mode there will be two test robots who will need to work side by side in order to escape GLaDOS, each with their own multi-colored Portal gun. Matt & I are totally excited to play together (he already claimed the taller, 'orange' robot, whereas I will play as the smaller, 'blue' robot). My favorite bit is the new 'gesture' command, which allows you to give your partner a little wave...and a HUG! A morale boost, definitely. As always, I love the writing for Portal, as GLaDOS never fails in 'her' expert manipulation techniques. Portal 2 is coming out next February. 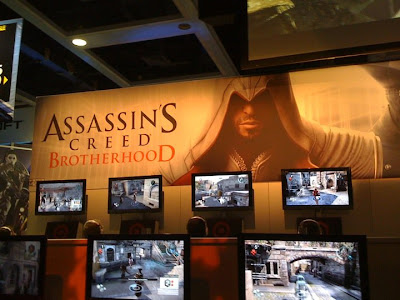 Okay, so now let me...talk...about Assassin's Creed: Brotherhood. I got a chance to play a ten minute demonstration of their multiplayer mode on Saturday morning after waiting in line for awhile and watching the promo reel run on repeat in an attempt to psyche myself up for the brutal beating I knew I was about to receive. First, the good points. The Frag Dolls hosting the booth were pretty adorable and fun, keeping the players going with lots of kudos and comments over their headsets during the demo. The in game setting was beautiful again, with the streets of what I assume was Rome providing the playground in which I would receive said beating. The ten or so characters you get to choose from are unique and each have their own stylized weaponry and combat characteristics. Once you are in pursuit of another player or being pursued there are lots of ways to hide or become incognito-I especially like the large glowing gates that would automatically shut behind you, leaving your chaser clinging to the bars in frustration before trying to find a way around. But since I didn't see the single player, I am mostly full of disappointment. I am not a multiplayer gamer. I find no joy in acquiring better ways to kill my opponents and repeatedly dying at the hands of foul mouthed teenagers and housewives alike. Give me narrative, give me emotions, give me a new single player AC experience that doesn't involve Ezio. I want Desmond and the Animus and a new incarnation of ancestry to delve into with the same enthusiasm I did with the first two games. So there you go, Ubisoft-I will play the single player version of the game, but I will not spend the $100 for the collectors set as I did with AC2. I will never play multiplayer and will instead continue to wait for AC3, considering this chapter in your franchise merely a pandering tool to the masses who can't stop playing the same map in MW2. And I'm not mad, just disappointed. Assassin's Creed: Brotherhood will be out this November. 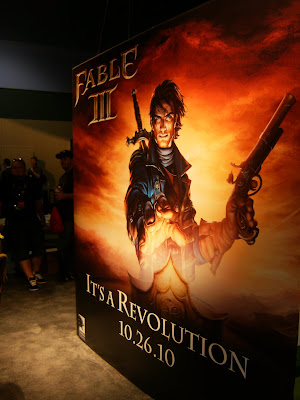 A small part of the Microsoft area was hosting a few demos of Fable 3 as well. You could choose to play either a combat heavy demo or a more quest based one. I chose the quest as I was told by a friend earlier that you could cheat and go off the beaten track a lot more, giving you more time to explore the game. Sadly, before I could do too much I got kicked off the machine by an exhibitor, but what I saw during that brief amount of time was more of the same beauty and life that F2 did so well. I was joined by my faithful dog, now in collie form with flowing hair, and given a couple of million bucks to play with along the way. My initial instinct was to press start to see my quest/item menu. This took me to a room inside a keep, where a butler stood by waiting for directions. I looked confused and the MS rep explained to me about how this room serves as the menu and traveling map-you now have closets to choose your clothing and hairstyles from-and the fast travel is now directed by what appears to be a scale model of Albion in the center. Highly convenient, but a little baffling to use since I was quite comfortable with the easy to navigate menu system in F2. Sadly, this was quite a hindrance for me because I instinctively wanted to hit start to see my menu and kept ending up in this royal room. The MS rep I was talking to said it was a bug and would be fixed by launch, but I wasn't sure if we were speaking of the same thing at that point. I completely deviated from the quest line, picked up another one, found a lost child and then was booted from the game. Overall the small bits of combat seemed congruent to the second game and the world looked similar only with vast improvements to detail and scenery. When I looked over at my friend playing the more combat focused demo I saw her character was wearing the most adorable set of black and white striped tights and got really excited about dressing up my little Fable doll when the time arrives. I would say out of the big titles, I am anticipating the release of Fable 3 in October the most. I might even buy the exclusive controller because it's gorgeous. 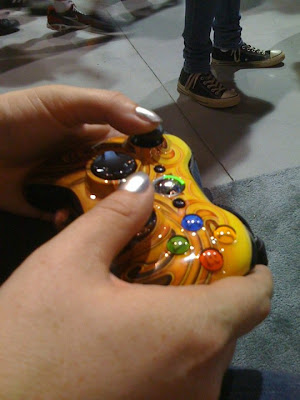 Overall, I was happy to have the chance to play ACB and F3, even if they were the only AAA titles I put my hands on all weekend. I figure that I will be playing them all in depth in the future so merely watching others wind their way through opening levels and bit parts were satisfying enough. A huge part of PAX for me is seeing the up and coming titles that the smaller or more independent developers are creating-to me, that is where the impressive innovation and ingenuity lie. But the big ones are always noteworthy. In addition to the above mentioned titles I was also happy to see Rock Band 3 getting a lot of attention-Matt asked a keyboardist if it was easy/fun and he nodded his head enthusiastically and said 'definitely!'. I briefly played a chapter of Donkey Kong Country Returns and was filled with nostalgia and love for the way they changed almost nothing about how the game looks, only improved it for the Wii motions. Oh, and Kinect, of course, which I will probably only mention once in the life of this blog...and there it was.

I will post more highlights from PAX in the following few blogs. See you then!