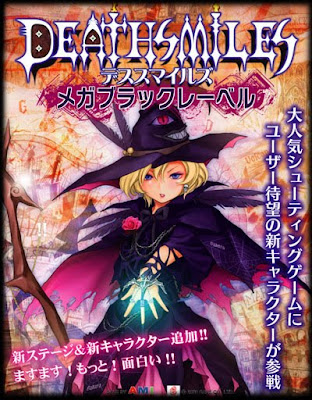 I will admit that I am guilty of adding video game ‘filler’ to my GameFly Q in order to have something to play during the lean times of summer and early fall when very few games are released. Into this basket fell Sherlock Holmes vs. Jack the Ripper, which I enjoyed despite glaring problems in functionality, and Naughty Bear, which was so boring I couldn’t even bring myself to get further than two levels in before sending it back. I also currently have two titles sitting on my entertainment center that would fall into this category: Singularity, which I haven’t yet played due to an intense addiction to Plants vs. Zombies, and Deathsmiles. I had little to no information regarding Deathsmiles when I rented it, other than seeing it in the Xbox 360 rental list and noticing that the cover was pretty darn cute in a gothic kind of way. I knew it was an arcade-style 2-D side scrolling shooter, and I knew the main characters were Lolita-esque anime girls because I saw some cosplayers hanging around the promo booth at PAXEast. And here is where a simple, casual question asked by my fiancée, “Hey, we should try out that shooter you rented” turned into a baffling two-day marathon of checklists and challenges.

When I was little I didn’t hang out too much at the arcade. Occasionally we would go to the mall and wander around Tilt, but if games were played they were strictly fighters, such as Mortal Kombat 2, Street Fighter or Killer Instinct (<3). I never really got a chance to play any arcade shooters because I was too busy hooking people with Scorpion. So I was pretty much a novice when we turned on Deathsmiles, and a tad nervous that I would be the one holding us back, dying repeatedly and causing Matt to have to carry my substantial weight. As it turns out, I didn’t have to worry about it so much-I learned quickly how to shoot and dodge with the best of them. But the game itself is a bit confusing. Let me describe some of my reactions to Deathsmiles in thought bubble format:

1. Why are there so many different game types in the menu? Are they all the same game?
2. Wow, this is Halloween-themed! I love it!
3. Aw, all of the girls get their own little helper animal, just like in Castle Crashers. Mine is a bat!
4. Okay, that’s a lot of cleavage. And why is she German?
5. What the hell is going on? What is Gilverado and why is it not the ‘real world’?
6. Apparently there is a back story here. I wonder if we get to learn it.
7. Nope.
8. Why is this boss a giant cow named Mary?
9. I love the falling chandeliers. And the couples dancing.
10. Wait, this is the entire game? This game is short! Only six levels and a big boss level!
11. That only took 25 minutes!
12. Let’s do it again. This time I want to be Player One. Put another virtual quarter in, love.

Deathsmiles is a fast paced game that gives you enough incentive to want to obsessively play it over and over again. We literally played for hours. And as I said in point number 11, you can play through the entire seven level game in about 25 minutes. It’s explosive and attractive, with all sorts of vague psuedo-exposition that assumes you will understand what the hell is going on just by repetitive deduction alone. Each level has its own setting, whether it be a forest or a graveyard, and through a trickle of conversation we determined that a swamp witch’s father (who says, ‘Ugh..hurk!’ much to my amusement) thinks that opening a gate to hell at mitternacht on All Hallows Eve will take him back to the real world. Apparently these girls have been transported to the cutest little nightmare land you've ever seen, been given elemental powers, and now have to decide to risk the ‘light’ (the gate) to go home again or to stay with each other and Mr. Dior. Who is Mr. Dior? No idea. What do these girls do in this ‘Gilverado’? Go to parties and take baths together. Who is this witch? Actually, it’s the Swamp Witch’s daughter. Huh? None of this really matters. We got sucked into the game because of the ease in which you could play through each level in a different way-very sly and seductive of you, Deathsmiles. And for every challenge there is a checklist, and for every item on the checklist there is an achievement. You see where I am going with this, right?

As with most old-style arcade games you have a Player One and a Player Two. Well, in Deathsmiles only Player One acquires a save file, meaning that Player Two is just a little helper bee along the way. This also means that only Player One can earn achievements. But with a game that only takes about 25 minutes each playthrough, we decided to take turns, switching back and forth so we could each have a chance to earn some tokens on the checklist. THIS became the Game. Matt (P1) would look through the checklist and say, ‘for this one we are going to play through the game on Level 3, including the bonus level’ or ‘for this one I am going to use Rosa, send her back to the real world and try not to use any bombs’. And then we would switch for the next round and I would take over and say ‘okay, now I need to keep Caspar in Gilverado and use a continue to fulfill those three achievements’. Every turn would add a new challenge and with it a new way to take on those seven levels of seizure inducing colors and movement. We literally did this back and forth trade for hours, waking up from a DS induced haze sometime Sunday afternoon to discover we actually didn’t want to play it anymore. It was about the time that I got screwed out of 80G (play with all four girls-did it, no achievement) that I put the controller down and backed away slowly.

I wouldn’t describe Deathsmiles as a fantastic game-but it was great fun to play with someone else. It’s rare that Matt & I get to play together-exclusive online multiplayer modes are a waste when there are so many gaming couples who would love a chance to snuggle up on the couch and kill a giant cow named Mary as a team. And after playing the same 5 minute levels over and over again you really get a chance to appreciate the aesthetic details you may have missed otherwise. For example, it look us a couple of times to realize that our little ‘pets’ could be moved into a better position for attack and that instead of using the buttons you could fire with the triggers and it made the controls much more hand-friendly. I came to love the boss animations, which were sort of hyper-realistic and moved in strange fluid ways-on two or three occasions I remarked that I thought the body of the Level C-2 fire dragon hitting the foreground while his head and neck followed suit in the background was a pretty neat effect for a game with fairly simple 2-D graphics. So many small details that become marking points for what to anticipate in each setting. All of these combined elements made Deathsmiles a fairly entertaining, albeit slightly hypnotic, way to spend a few weekend hours with a friend or loved one.

Email ThisBlogThis!Share to TwitterShare to FacebookShare to Pinterest
Labels: Deathsmiles