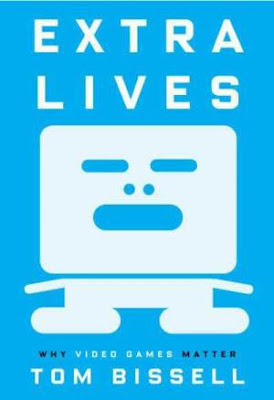 A little change of pace-I thought since this is a book about video games I would copy this review I wrote for Goodreads here.

I saw this book featured in a slate.com article a few months ago and thought a-ha! This book will entertain me-it is relevant to my interests! But…

There were so many things about this book that offended me. First of all, I would say that if the author’s thesis was to explain why video games matter, he sure did a piss poor job. The highlights for his argument were lost in a jumble of ten dollar words and arrogance, which serves to turn off even the most avid gamer-or reader. In fact, I would say that reading the parts of this book that aren’t just rambling summaries of video games and interviews with developers and designers-the sections that are truly just the author’s voice-just convinced me that video games only matter in terms of keeping people away from them because they are addictive and manipulative. Bissell spends an entire chapter pontificating about his brief obsession with cocaine and GTA IV. When he walks into Ubisoft and sees a lot of attractive women sitting at desks and walking around he wonders if their success has lent them the ability to have models or escorts hanging around. Oh good, misogyny and elitism, what an admirable combination! This seems like exactly what the video game world needs less of right now.

The author spends most of his time trying to dig into the ‘meaning’ of video games in such an over analytical way that you wonder what he gets out of the experience at all. He seems to hold games to some sort of outrageous standard and pulls all sorts of people in the business into the book to give credence to his almost tantrum-like arguments about video games as art forms and how this or that didn’t quite reach the astronomical expectations he has for his games-the same games he repeatedly talks about ruining parts of his life because of his own obsessive nature. He even mentions casually telling a BioWare employee that he spent 80 hours inside of Mass Effect and got a raised eyebrow of surprise-even the designers felt like that was a lot. Video games as ‘art form’ has been a hot topic in the news for awhile, and although Bissell seems to be an apologist he also appears to think that nothing has quite reached this level yet.

I also got totally lost in his overuse of SAT words. I have a fairly high vocabulary and haven’t had to consult a dictionary in a LONG time while reading a book, but I didn’t know the meaning of about 50 words in the first several chapters. I don’t think this is a player fail, it seemed almost counterintuitive to what he was writing about in the first place. When you are talking about Resident Evil in an awkward second person voice and describing a surprising moment where the monsters don’t ‘disappear’ after killing them, do you need to start the next section by trying to violate your readers with twelve syllable words? The contrast is a little startling and alienating. I can almost see some people liking it because it appears that he is elevating their favorite hobby to an intellectual level, but if you read closer he is almost always talking about how or why it failed to meet his expectations. And if I never heard the phrase ‘ludonarrative dissonance’ again, it will be too soon.

I did like listening to the game company representatives talking about games, however. The author has enough of a right mind to ask detailed and interesting questions-the interviews with Jonathan Blow and Peter Molyneux were brilliant (even if the Molyneux Q&A was placed in the Annex). Occasionally he would rise above (or below, because I kept picturing him on some floating cloud of video game self importance) his own thought process and say something insightful or noteworthy. Finding out that BioWare employs more writers than designers in their Edmonton office was something I didn’t know previously (but should have, considering how much I adored Dragon Age for its creative intercharacter relationships and lauded them repeatedly for it), so that was a positive note. And he mentions here and there the rise of the indie scene, which is near and dear to my heart.

Ultimately, if you aren’t a gamer you might find a lot of this book ridiculously boring. Occasionally the author spends several pages of a chapter summarizing a game in that monotonous ‘this and then this and then this’ chronology that can bog down any game reviewer. So if you’ve played them (Fallout 3, Far Cry, GTA IV, Mass Effect, for example) you might find this comfortable and interesting as a comparison (he thought this, I thought this). And his devotion to gaming is admirable, as well as his completionist nature (I am the same way about games I love). But his premise of ‘why video games matter’ was never fully actualized-I sort of learned why they matter to him, but never why they should matter to everyone. Calling the book Extra Lives: My Unhealthy Lifelong Obsession With Video Games would have been a better title.