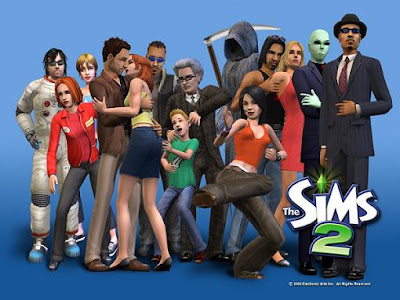 Over the weekend we had dinner with a couple of friends and the subject of video games came up (as it always seems to go with us at the table). Somehow the conversation turned towards online life simulators such as Second Life and The Sims. Although neither of us ever really got into the genre, Matt & I both had some pretty humorous experiences with both the Sims Deluxe and The Sims 2 that I thought I would share.

WARNING-This is probably PG-13 to some audiences.

First of all, I have to admit that I probably should’ve been playing Sim City instead of Sims Deluxe, because at first all I wanted to do was design buildings. I acquired the cheat code for money (rosebud?) and could instantly afford to build the house of my dreams. And I did. My Simansion was delightful-full of modern art pieces and expensive furniture, divided in two by a giant staircase where an Olympic size pool glittered at the bottom. I created an outdoor area in the back with a hot tub and a raised deck-the landscaping was immaculate. Oh, right, and sometimes I actually played the game. But after a few conversations in creepy, nonsensical Sim-speak (is that a sailboat?) and consistently forgetting to go to work every day because I would always miss my carpool (I was choosing the perfect outfit), I got bored. I couldn’t add anything else to the house-it would break up the ideal Feng Shui environment-and I hated the monotony of eating, cleaning, showering and sleeping. It got to the point where I was watching my Sim character watch television. What the hell? How is this entertaining? 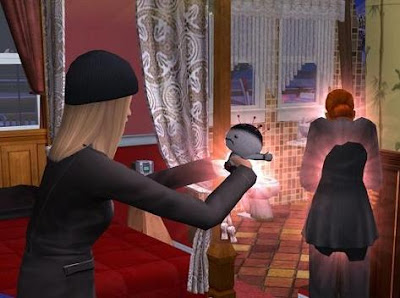 So I decided to try out some ‘extras’ I found online. The first thing I acquired was a chemistry set. By using the set you could concoct many different colored potions. Some of them were silly-if you drank the red one your worst ‘enemy’ in the neighborhood would pop in and fall in love with you. I think one of them reversed your stats so if you were social +3 you would now be social +8 or something similar. But my favorite was the Dark Green potion because it would invoke an evil twin. Supposedly, the clone is meant to wander around and wreak havoc on your relationships with your neighbors or something, but I am not your typical Sim owner. Instead, I would conjure up a voodoo doll (another downloadable), trap the twin in a room with no doors and use the voodoo doll on her. That’s right. I’m a WICKED WICKED Sim master. Eventually she would start crying so I would give her an espresso machine to make her feel better (you can tell where this is going, right?). Oooo, sorry, no bathrooms. Here’s a mop.

Another little extra I found was a pretty vase sitting on a marble stand that I placed near the door of my Simansion-the perfect accent piece. Okay, I’ll be honest. The download was called ‘Cursed Fire Vase’. Clicking on it gave you the option ‘Think About Fire’, and boy, did I ever. Thinking about fire ‘accidentally’ set the kitchen ablaze. I asked the resident Sims to put out the fire, but it got out of control and tragically, they perished in the inferno. So Death came a-calling, sickle in hand. But he, too, was soon in flames-a victim of ‘The Vase’. I think this is my favorite of the stories because at the time I couldn’t stop laughing. And it wasn’t maniacal, I swear. It was just really, really funny.

I wasn’t always so sadistic-sometimes I rewarded my Sims with a turn in the Orgasmatron. Yes, you are reading that right. The O-Tron looked like a high-tech cylindrical shower only without the frosted glass-like an upright tanning bed. A Sim would enter the O-Tron and emerge a few seconds later incredibly happy. Granted, they were pretty blurry below the waist and always ran for the bathroom post O-Tron, but delighted nonetheless. So see? I wasn’t always malicious! 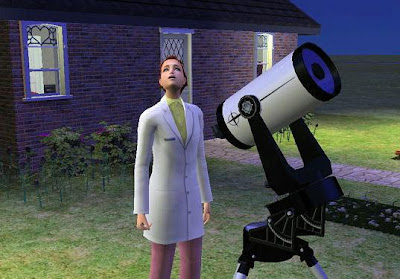 When I started playing Sims 2 I knew it would be a little different because of the added procreation and parenthood elements. I placed me and Highlander’s Adrian Paul inside a lavish Simansion where we instantly got to work making whoopee in the hot tub. A baby soon followed. Then it was a toddler. Then I was bored again and such ended my Sims experience. Matt, on the other hand, has a great Sims 2 story. Apparently, he decided that Adam and Jamie from Mythbusters should share a house in the greatest bromance experience ever (For Science!). He even set them up with the highest quality telescope on the market-which of course meant imminent alien abduction. Adam was the chosen abductee and came back from his ‘visit’ a little changed-he was now pregnant with a wee little alien girl. No problem, these two are pros at experiments-they just raised her until she was a toddler before heading out into the dating world again. Domesticated Adam and Jamie is pretty amusing (hey, slash fic writers, Myth Confirmed!) and all the more so because it wasn't planned-the game put him in this inexplicable situation.

I might pick up a rental copy of the Sims 3 when the console version arrives this fall, but I will never be a die hard Sims player with a simulated job, a fake family and a digital house. I am doing pretty great with all of those things in the real world.

Email ThisBlogThis!Share to TwitterShare to FacebookShare to Pinterest
Labels: The Sims