E3 announcements are dominating the headlines of all my game feeds this week. Some of them were anticipated since many of the games have been on the burner for awhile now (COD: Black Ops, MGS: Rising, Fable 3, etc), whereas others have been welcome surprises. Microsoft officially named its new motion controlled peripheral Kinect. Sony is still talking about the PSMove and Nintendo finally unveiled their 3DS. All in all, E3 has been more spectacle than surprise, which seems to suit as it certainly functions as one giant advertisement. For me, E3 serves as a preview for what might be playable at PAXPrime in the fall. Assassin’s Creed Brotherhood is a sure bet, as well as Rock Band 3 (no one can resist the power of the keytar) and Fable 3. Nintendo just announced a sequel to Donkey Kong Country, DKC Returns, which is supposed to release sometime this fall, so the twelve year old in me is jumping up and down in squealing excitement over spending more time collecting bananas in the mines (wheee!!!). But one of the E3 spotlight games I am looking forward to most is Portal 2-although I never even finished the tutorial of the first game. How can I possibly be so excited about a sequel to a game I never actually played? 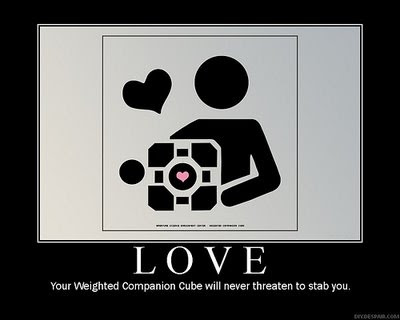 When I got back into gaming a few years ago I started hearing inside jokes regarding companion cubes and cake. The internet was littered with blue and orange portal memes and pictures of heart adorned cubes. I had no idea what was going on, but I thought it was adorable. I discovered that the source of the hype was a game called Portal, released by Valve and included with Half-Life 2 and Team Fortress 2 in a collection called The Orange Box. The gameplay is part puzzle, which I like, but also part first person action/shooter, which wasn’t something I felt as though could handle at the time since I was a FPS novice with serious motion problems (I had a really hard time moving and shooting simultaneously). A friend briefly showed Portal to me as he attempted to create a ‘falling into infinity’ pattern for an achievement (Terminal Velocity 5G), but I was already so immersed in stumbling through Bioshock and Assassin’s Creed in late 2007 that I could barely think about playing anything else. So due to the timing and the first person aspects, Portal ended up passing me by. It wasn’t until Rock Band released Jonathan Coulton's Still Alive as DLC that I even thought about it again.

I am the designated singer for our band, Christine loves Noah, in RB so I am always on the lookout for downloadable songs that I can sing without stripping my vocal cords to shreds (thanks a lot, Metallica) and Still Alive was perfect. I thought the lyrics were hilarious and Matt informed me that it was the end song from Portal, the game I had almost completely forgotten about from the previous year. I decided I wanted to give it a try and rented The Orange Box a couple of days later. I instantly loved the writing and the world, but as I got deeper in I started to falter through the movements. I didn’t have any problems setting the portals up in the appropriate places, but quickly moving them and myself simultaneously was hard work. I got to the last level of the tutorial, attempted the portal pattern dozens of times, sighed heavily and stopped playing. It was depressing. The actual game was right on the other side of the proverbial wall and I had my hand up against it without any hope of passing through. And although Matt could’ve taken over and gotten through it for me, I was stubbornly self-reliant in those days and refused any assistance. So stupidly, I gave it up instead. 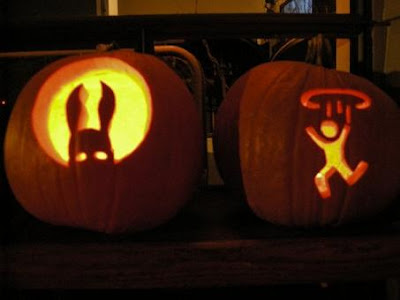 But I loved the lab. I loved the passive aggressive remarks of GLaDOS and her little droids and I adored the portals, as seen in my 2009 Halloween pumpkin alongside Matt’s Splicer bunny mask (nerds!). The writing is truly inspired. And I really want to try again. I have progressed from novice to beginner in the FPS world and as a result have much better control over first person environments. Watching the Portal 2 teaser from E3 has motivated me. So as part of my Summer Gaming Challenge that includes playing the Prince of Persia games and diving into Mass Effect, I am adding Portal to the top of the list. It’s the only way I can truly justify my excitement for Portal 2 in 2011. Plus if I remember from the tutorial, I was promised cake, and I love cake!