On Friday my office allowed everyone to enjoy their three-day weekend a little more by allowing us to leave two hours earlier than normal. I had every intention of using this time to camp out on my couch and further progress in Alan Wake but instead decided to swing over to the closest theatre and give Prince of Persia my precious paid hours. And seeing as how I ran into the Cineplex with only minutes to spare until the next showing, I figured it was destined (I’m snickering as I write this, I promise). First let me say that I have almost zero knowledge of Prince of Persia as a video game franchise. I’ve mentioned my inability to master the 'wall-run’ game mechanic, so I have opted out of further humiliation by not even giving them a chance. I’ve only spent a scant few hours in the 2008 release and most of them were frustrating. And to be honest, the narrative wasn’t all that captivating. I liked the flirtatious banter between the male and female leads but got bored soon after when it became obvious the most action I was going to get was between Mr. Unnamed and the vines along the walls. I fell off so often I had to see the ‘oops, let me catch you’ cut scene hundreds of times. I have the Forgotten Sands on reserve right now, but haven’t really made any moves to acquire it. Basically, dear reader, I am trying to convey to you the sheer apathy I had about the Prince of Persia series.

We don’t watch a lot of video game to movie adaptations in our household. The crossovers are usually silly and over the top, making the lead characters into cartoonish figures, and the narratives contrived and unbelievable. And Prince of Persia was all of those things. The characters were stereotypical-the hero, the heroine, the villain and Miscellaneous. The plot meandered around the desert and the ending was obvious (come on, the Sands of Time?). Through all of that, though, watching the movie was actually pretty fun. Jake Gyllenhaal played Dastan swoonishly well with his giant puppy eyes and terrible wig. His female counterpart was ridiculously beautiful in an Arabian princess kind of way. Ben Kingsley wore too much eyeliner and always looked as though a wicked laugh could emerge from his throat at any moment and surprise everyone (even himself). It was like movie ice cream for people who would love Aladdin’s unwritten PG-13 romance novel. Trust me boys, it’s a date movie. The ladies will love it. And did it hint affectionately at the video game? Yes. Dastan spends a lot of time jumping over rooftops and using wooden poles jutting out of buildings to leap around. He even does a two-second wall-run (I was looking for it). There is a scene where he stands above the city on a ledge and the camera does a full pan around him ala Assassin’s Creed. I wanted him to dive into a haystack so bad. 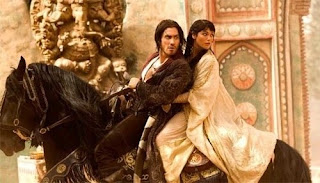 If nothing else beyond pure entertainment value, watching the movie has inspired me to continue playing the games. The combination of history, romance and the paranormal usually pique my interest and I regret not giving the franchise a proper chance. I am now planning on doing something unprecedented for me-playing the original version of the Sands of Time. Maybe if I give the more critically acclaimed volumes a chance I will find a new series to love.

Email ThisBlogThis!Share to TwitterShare to FacebookShare to Pinterest
Labels: Movies, Prince of Persia