The Light is in the Details 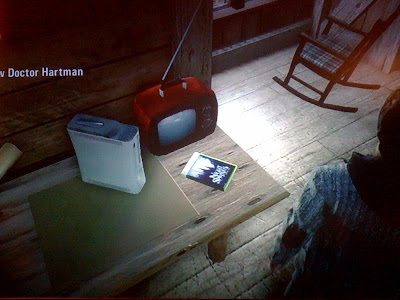 Sometimes I don’t realize how much I love a game until it’s over and I want to play it all over again. This happened with Alan Wake. While cruising through it I could only think about finishing it, but after the credits rolled I lamented not spending more time exploring each level, peeking in every corner and behind every tree. It wasn't the perfect game, but it was obviously made with loads of love-and that affection reflects throughout the landscape of Bright Falls.

As I previously summarized, Alan Wake plays a horror novelist who gets caught in a nightmare while visiting Bright Falls, Washington. The narrative twists and turns through six episodes while Alan fights the manifestations of ‘darkness’ with ‘light’ in the form of flashlights, flares, spotlights, flashbangs, streetlights, etc. Darkness = danger. Light = safety. Anyone who ever insisted upon a nightlight as a child is well aware of the wicked things that hide in the dark. And they do, and they have chain saws, knives and axes. The light objects are beautifully rendered throughout the game-beacons in an otherwise shaded environment. A flare gun is the ultimate weapon and has its own red-hued animation, splashing a bright glow across the screen and obliterating the dark. Alan spends a lot of time between destinations on densely forested trails in the shadows of large trees and fight sequences are often preceded by gray mist and a musical crescendo, so whenever I saw a streetlight or neon signpost shining dimly on the horizon I literally felt the tension leave my hands as I hurried him towards it. The designers did an amazing job characterizing the juxtaposition between the halos of light and the creeping darkness.

The creativity and details in the setting are brilliant. So many games reuse landscapes or fail to fully actualize a setting, so it was delightful searching the nooks and crannies of every building or gazing off mountain trails onto waterfalls or rivers below. The forest areas are all very similar, but the pathways lead to different abandoned logging areas or contain bridges and ‘Historical Settings’ just like you see in a National Park. The collectibles are manuscript pages that hint at what happens next (adding to the anticipation) and slightly less understandable coffee thermoses. Some of the buildings contain televisions, which are interactive and tell a story of their own using a show called Night Springs. I searched diligently for all of the small radios and would sit and listen to every show long after the announcer transitioned to the music. Artists like Nick Cave, Poe and Poets of the Fall are featured between episodes or filter out of the radios if you listen long enough, which is an unexpected treat. Posters line the walls, a jukebox rocks a tune, possessed couches toss themselves at you occasionally, the cars contain lit overhead dome lights and a promotional cardboard cutout of Alan Wake travels throughout the game as a sort of comic relief-always welcome considering I was startled by practically everything skulking in the dark. It is all of these fully fleshed out details that add depth to an otherwise basic story of Good vs. Evil.

I would like to say that the narrative is unique, but it’s not. I saw these plot elements in Stephen King’s Secret Window (which is no surprise considering the several reverent mentions of Mr. King) where it turns out the writer having the experience is actually penning his own story. I was following along with no problems until the very end where it heads into the realm of mysterious abstraction. Not that I was disappointed-it was still unexpected and thought provoking. And the story kept the game moving along at a brisk pace, thankfully, adding to the sense of urgency constantly humming on the horizon. But was it scary? Nah. Startling, maybe (when you are fighting from the front and suddenly get knifed in the back) but nothing was ever really terrifying about Alan Wake. Maybe a new subgenre should be created under survival horror: Cinematic Thriller.

I also wasn't impressed with the in game advertisements. There is an episode of Futurama where the main character has a dream about flashy underpants. When he awakens he possesses an irresistible urge to purchase said underpants. His friends inform him that in the year 3000 advertising has now taken over our dreams. Troubling, right? Apparently, Alan Wake is having the same dilemma. While battling shadow figures and desperately trying to uncover what has happened to his poor wife his subconscious is also pondering his cell phone provider and car choices. I mean, using Energizer batteries was bearable-you could barely read the packaging. But making me watch a Mustang and a Verizon commercial (and giving me 5G as a reward) and then peppering the map with billboards selling the same was excessive and ridiculous. I shirk watching television shows during their regularly scheduled programming because I loathe being battered with advertisements. I assume this is the wave of the future and I should probably learn to go with the flow, but I swear if I start dreaming about flashy underpants I am going to be very upset. However, I will admit the screenshot above is adorable, in a meta kind of way.