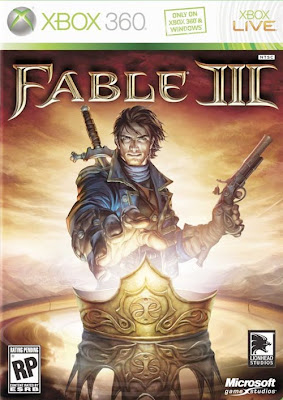 With the newest of the Assassin's Creed franchise focusing mainly on its multiplayer components, I have to admit that I am now anticipating more the release of the newest in the Fable series. Having never played the original Fable, I got my first taste of Lionhead Studios' RPG via the sequel last year and quickly fell under its enticing spell. Was I the only one who meticulously collected silver keys and bumped off every mouthy gargoyle? I even cheated a bit to experience all three 'endings' by powering off the 360 directly following each resolution (I heart auto-save). In the end I chose to save my dog...of course. In my circle of semi-gamer friends Fable II became some sort of gateway drug-even those who hadn't played anything in years were suddenly spending countless hours in Albion. I remember having many unexpected discussions about giant tattooed characters and polyamorous relationships with various friends and co-workers. The DLC alludes to the playable character as King of Albion in Fable III and all of the video teasers released by Lionhead seem to confirm. I have been warned by the boyfriend and various blog commentators that listening to Peter Molyneux is akin to seeing brochure pictures for hotel rooms-when you get there it just doesn't seem as fancy as advertised-so I am always trying to listen to Fable hype with a grain of salt. Overall, though, I thoroughly (and I mean thoroughly) enjoyed Fable II and imagine Fable III will not disappoint.

I've spent a lot of time in the past few years thinking that Western RPGs with their Tolkienesque landscapes and min/max mania gameplay are not for me. Well, since two of my obsessively favorite games in the year are both Western RPGs I find myself less inclined to scoff when I think about MMO's like WOW and Everquest. I can now see why a world complete with inter-character relationships and an ongoing narrative would be an attractive endeavour. Now I can definitely say that I am not ready to commit to anything so boundless and potentially infinite since I am pretty sure I would join a guild and feel guilty if I wasn't there ALL OF THE TIME to help them in their quests, but I do see the appeal in having a game that you LOVE that NEVER ENDS. Honestly, I think my discomfort comes from the idea of playing with real people. Playing with computers is better for me because there is never an expectation about how/when you will play. Computers don't care if I play poorly and lose the battle for everyone. Computers don't drop out of games mid-play and hurt your overall chance of success. Computers don't count on you to be there at exactly 5pm on Wednesday to complete a raid. This is why single-serving RPGs work so well for me and why ongoing multiplayer RPGs would not. Plus I am afraid I would get entranced by the limitless possibilites and disappear into some fantasy world and accidently forget to feed my cat and go to work and then find myself living in my parents basement drinking Mountain Doom and eating Cheet-oos.

Along the same vein, I have never played D & D, but The Gamers: Dorkness Rising is a hilarious film.