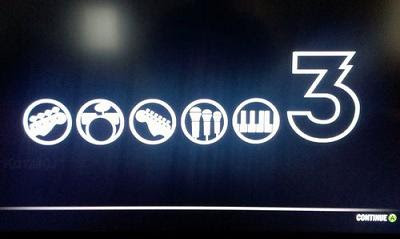 Apparently when you load up the demo for Green Day Rock Band on the 360 you are greeted with this little teaser for RB3. Hooray for the continuance of the vocal harmony option from the Beatles RB! And, okay, I am sure the keyboard icon represents just that-a keyboard...but in my dreams it means that Harmonix is currently creating some hollow and plastic green-red-yellow-blue-orange buttoned keytar that you can strap on like a guitar and play Freezepop songs as God (and the band) intended.

I am still shaking my head about Green Day Rock Band. It's been getting a lot of buzz, but I continue to question its relevancy in the hierarchy of classic rock bands that deserve their own exclusive titles. Harmonix recently added a poll to their website asking voters to pick from a 'hypothetical' wish list of bands they would like to see exclusives for such as Pink Floyd, Queen or U2. I voted Pink Floyd...of course...but Queen would also be deserving. I hope Harmonix really is considering getting the rights to Pink Floyd and adding them to the repertoire and not just teasing us mercilessly (probably just teasing us mercilessly). I know that it's easier to add music to the current game via DLC but seeing the unique visual trip of The Wall in the distinct RB animation style sounds brilliant.

Speaking of Rock Band...My mother joined us for a lovely evening of Beatles RB while visiting from Idaho last weekend. Never in my wildest imagination would I picture seeing my mother with a mic in her hand reliving the music from her teenage years via a video game. Although I love to sing the songs, I wasn't alive for the experience of the Beatles so I know that I am missing the emotional piece of their musical influence on the world. She seemed to enjoy the game and I thought it was quite fun to share something I love so much (video games) with something she loved so much (the Beatles) in a combined format. It was also funny to hear her asking questions about Red Dead Redemption while watching Matt play the next day. "Why is he mounting from the right side of the horse? It should be the left side!"