Halloween is my favorite holiday for a whole cornucopia of reasons. Since I live in the Pacific Northwest I am lucky enough to see the trees change from green to orange and red while the air turns crisp and cool. The sun sets earlier, the sky darkens sooner. But mostly it’s because of the spooky overtone of the holiday. I adore being scared. And not the ew-blood-and-gore-and-oh-god-are-those-brains-I-can-see-pouring-out? kind of scared but the tiptoeing through the dark woods and hearing a noise you can’t identify and holy-crap-maybe-it’s-a-killer-or-a-werewolf-or-a-sparkly-vampire kind of scared. But alas, I am now in a relationship with someone who is pretty ho-hum when it comes to scary movies, so I don’t really get a chance to watch them anymore. Who would want to watch a scary movie alone? Half the fun is clinging to your partner in faux fear when that mystery sound finally pops out of the woods. So I have found an alternative to the scary movie genre in my life-survival horror games.

One of the first I played in the horror genre was Fatal Frame II: Crimson Butterfly for the PS2, a Japanese game with all of the dark and ghostly elements that I love in scary movies. You play as a little girl who has lost her twin sister in the woods while chasing an ethereal red butterfly. When you finally catch up with her you realize you are now trapped in a city full of ghosts. While exploring the overly creepy and seemingly abandoned village you acquire an antique camera that exorcizes ghosts. I guess you’ve heard the old adage that a camera will steal pieces of your soul-this game takes that to heart. The combination of eerie music and the beauty of the setting kept you on the edge of your seat-knowing that at any moment the sensor on your camera would start flickering and you would be going up against an unknown entity. Instead of fighting stock ghosts with all of the same features you encounter all kinds of tortured souls-weeping women, angry men, little girls…All enigmatic qualities I love in my horror games. I know there are four in the series (even though the fourth was developed for the Wii but never released in the West) but I never played any of them beyond 2. 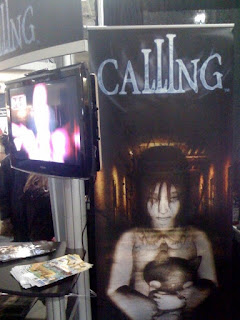 I took the above picture at PAXEast and got an itch to rent The Calling last weekend. It starts off with a series of instant message texts across the screen where students are conversing about someone reading a website or watching a video and then disappearing or dying-like if Fear Dot Com and Pulse (two really bad horror movies from a couple of years back) had a baby in the form of a Wii game. I played the first two chapters-both were spooky and dark with the occasional ghost popping in to say hello. You use the Wii-mote as a cell phone, so while you are nervously creeping through a house full of creepy dolls (ugh!) or an abandoned school the phone will ring loudly and scare the pants off you. A child’s voice on the other end tells you they are on the way up to shake you (or something) which is wildly disturbing and certainly gave me the shivers. But the controls were off center and slight hand movement turned into giant screen movement and after about an hour I had to turn it off due to motion sickness alone. And although it is definitely startling to get jumped by a ghost, if the game gets stuck and the same ghost keeps jumping you the game play suddenly loses its eerie charm.

Last year I picked up Silent Hill: Homecoming for the 360. I hadn’t played any of the previous games, only watched others play them, so I wasn’t quite a veteran of the series (does watching the movie count?). Apparently, the Silent Hill games have very definitive strategies that I was unaware of-and the combat gets HARD. I loved the setting-standard abandoned town and mutated creatures with drifts of snow and ash falling innocently around you-but I could only get about 1/5 in before I found myself in an impossible situation. Boss fight, no health packs, half life. Dying meant starting over in the same place-with no health packs, half life. And you can’t retrace your steps-the game only moves forward. The only way for me to progress was to start over- but I was already about 7-8 hours into the game and admitted defeat instead. Sadly, I was having a lot of spooky fun prior to this setback and was disappointed. So in addition The Calling, I also acquired Silent Hill: Shattered Memories for the Wii last weekend. In the beginning the game warns you that it will psychologically profile you to mold the game into ‘your worst nightmare’. Apparently, this means giving you a ‘Yes or No’ quiz that includes such questions as ‘Do you make friends easily?’ and ‘Do you enjoy sexual role play?’ Yikes-rated M for Mature, indeed. The premise is based on a past event-you are the main character speaking to a psychiatrist about getting into a car crash and losing your daughter in, of course, Silent Hill. I like it so far and intend to keep playing, but the ‘psychological tests’ make me giggle. For no explained reason, I colored this: 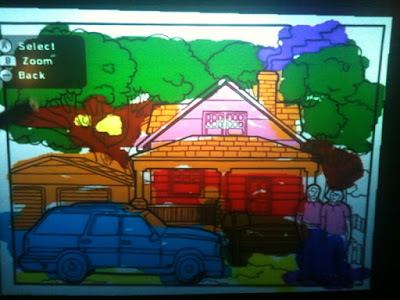 I like the Japanese survival horror games because they terrorize you psychologically more than physically. Chasing a butterfly in a quiet forest at night may sound peaceful and calm, but trust me, something wicked is certainly following behind. Western horror games tend to focus on monsters, zombies, blood-your basic slasher film. I like the subtlety of the Japanese horror genre much more than the gorefests the Western climate prefers.
Posted by Jessica Dobervich at 9:59 AM